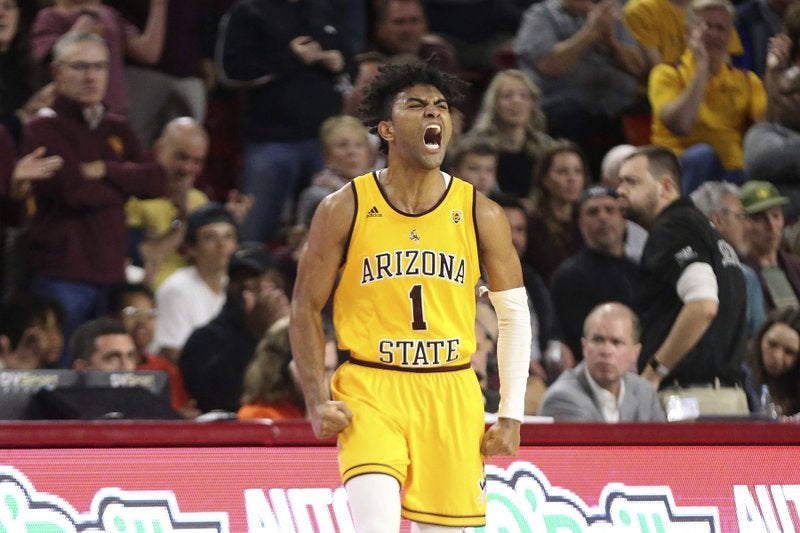 FILE – In this Feb. 22, 2020, file photo, Arizona State’s Remy Martin (1) shows his feelings after a run by his Sun Devils against Oregon State during the second half of an NCAA college basketball game in Tempe, Ariz. Martin was selected to the Associated Press All Pac-12 team selected Tuesday, March 10, 2020. (AP Photo/Darryl Webb, File)

“Starting from a young age, I have worked towards the opportunity to play in the NBA and I have now decided to take another step into making my dream a reality,” Martin said in a statement Monday. “I will forever cherish the time I have spent at ASU.”

Martin led the Sun Devils with 19.1 points. 4.1 assists and 3.1 rebounds in 2019-20, putting them on the cusp of a third straight NCAA Tournament appearance before efforts to stop the spread of the coronavirus led to the cancellation of the college basketball postseason. He was named first team all-Pac-12 by The Associated Press.

A 6-foot guard from Chatsworth, California, Martin had an immediate impact at Arizona State as a freshman in 2017-18, providing an energy spark off the bench to help the Sun Devils reach the NCAA Tournament for the first time in four years.

Martin took on a bigger role as a sophomore, averaging 12.9 points and 5 assists while leading the Pac-12 with a 2.4 assist-to-turnover ratio. Arizona State made consecutive NCAA Tournament appearances for the first time since 1980-81.

Martin was second in Pac-12 scoring as a junior and was considered a front-runner for conference player of the year until Oregon’s Payton Pritchard surged ahead late in the season.

Martin is a superb on-ball defender and is shifty on offense, with an ability to get to the rim, hit stop-and-pop mid-range jumpers or wow the crowd with no-look passes.

The wait for Hyun Bin: Behind the scenes