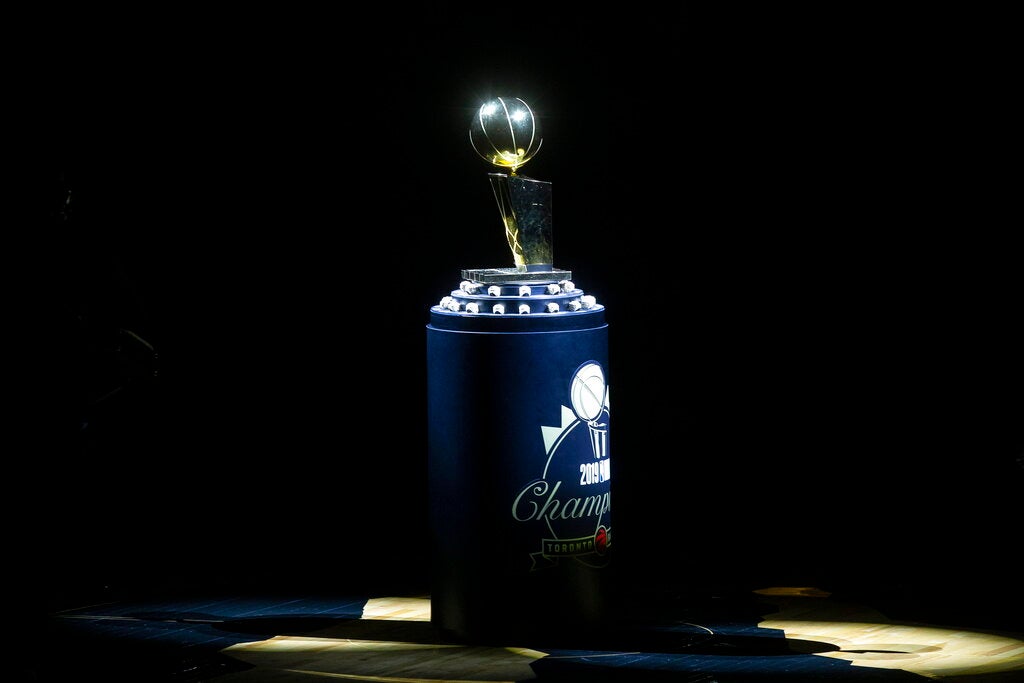 The Larry O’Brien Trophy stands at center court during a ceremony to celebrate the Toronto Raptors’ 2019 NBA basketball championship, before the team’s game against the New Orleans Pelicans in Toronto on Tuesday, Oct. 22, 2019. (Chris Young/The Canadian Press via AP)

NBA officials are studying the possibility of staging the entire playoffs in Las Vegas but nothing is close to being settled, Sports Illustrated reported Thursday.

According to a story on the magazine website, unnamed sources said the league is exploring what it would take to stage games and house players in Vegas hotels and that while nothing is near being completed, there is also nothing off the table.

The report also cited several league and club sources saying there is no chance of staging a typical NBA playoffs involving travel between cities due to different impacts of the deadly disease in different areas as well as potentialy travel issues.

Quarantines for teams in one location and playing in an empty arena is seen as the only answer, with Las Vegas being the only city the league is seriously considering, an NBA source told Sports Illustrated.

A CNBC report last week said the NBA has considered many scenarios but was not near finalizing any one-site plan, including a tournament idea that would send 16 teams in a reduced best-of-five first round, then two knockout stages to decide which teams would play a best-of-seven NBA Finals.

The NBA stages Summer League events annually in Las Vegas and so has relationships in place with hotels and arenas that could accomodate such a playoff.

But staging such an event would require thousands of players and team staffers to journey to Las Vegas, support staff at arenas and hotels to work, broadcasters to provide workers to telecast the games.

That would also require thousands of COVID-19 tests to be available and be advanced enough to quickly provide results.

And conditions would have to be advanced enough where using so many tests for an NBA tournament would not be seen as controversial, given how much of the nation has yet to be tested.

The league shut down on March 11 after Utah’s Rudy Gobert tested positive for the coronavirus. Major US sports leagues and events followed and much of the sporting landscape is barren into July.

The league was already looking at up to $400 million in losses after issues with Chinese officials over a tweet supporting Hong Kong protesters by an NBA executive last year.

Losing the final month of the NBA regular season and playoffs would deliver another major blow to team owners and players.