Dennis Rodman was one of the rivals Michael Jordan had to conquer on his way to his first run of three straight NBA titles. And Rodman then became one of the teammates who helped Jordan pull off his second three-peat.

Armstrong was there in the beginning, when Jordan and the Chicago Bulls needed time to figure out how to eventually beat Rodman and the Detroit Pistons for Eastern Conference supremacy and a trip to the NBA Finals in 1991 that started the title run. And Armstrong was on the other side in 1997-98, playing for a Charlotte team that lost to Jordan, Rodman and the Bulls in the East semifinals that season.

For as good as the likes of Jordan and Scottie Pippen were, Armstrong — the longtime NBA guard and three-time NBA champion with the Bulls who is now a California-based sports agent — cautions against underestimating Rodman’s role on those Chicago title teams in 1996, 1997 and 1998. 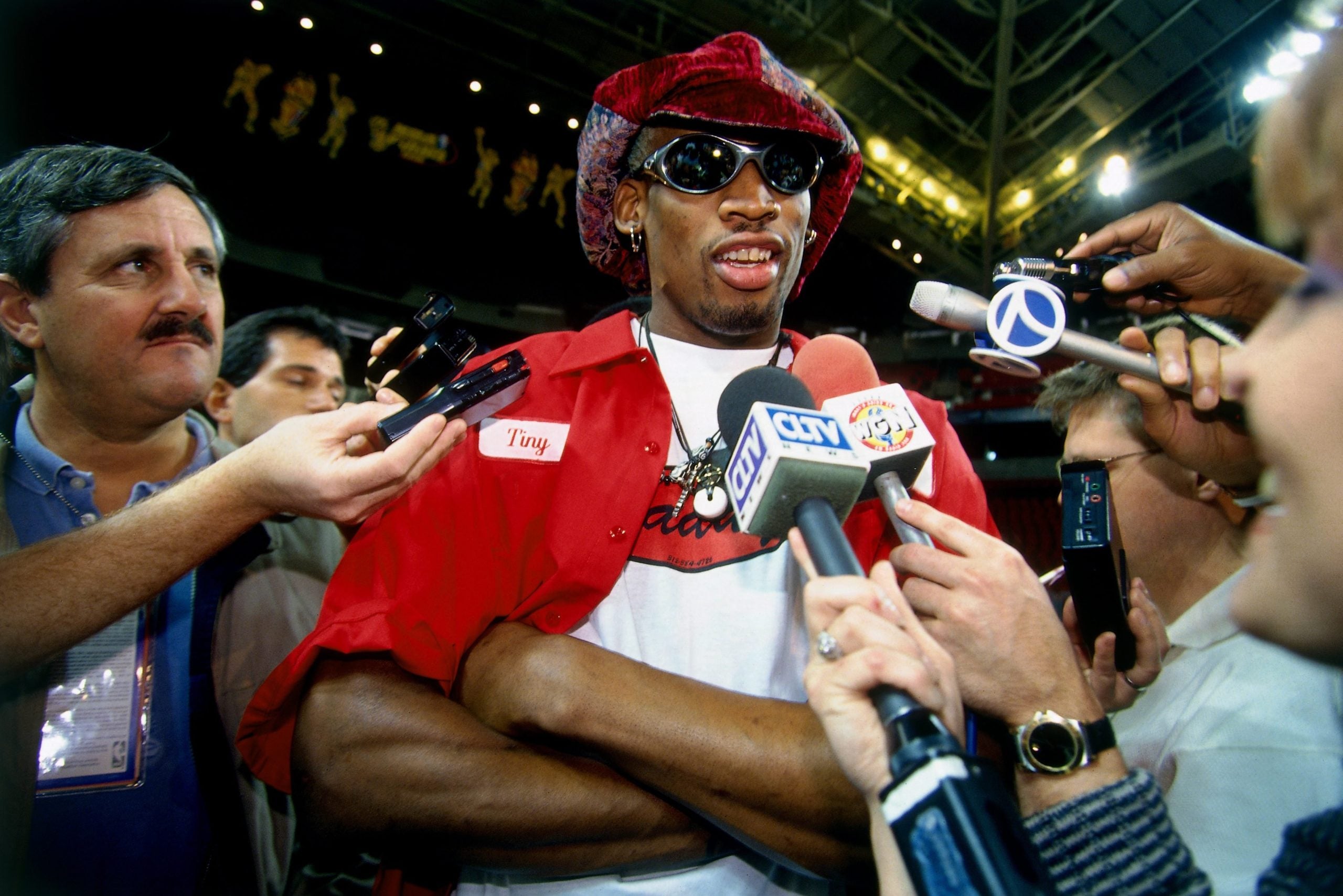 FILE – Dennis Rodman #91 of the Chicago Bulls talks with the media before playing the Seattle SuperSonics in Game Five of the 1996 NBA Finals at Key Arena on June 14, 1996 in Seattle, Washington. The Sonics won 89-78. Copyright 1996 NBAE (Photo by Jeff Reinking/NBAE via Getty Images)

“The thing I always admired about Dennis was he was a very, very intelligent player, and after all of the hair colors and semantics and all those things, underneath that was a really, really good basketball player, very fundamentally sound,” Armstrong told The Associated Press. “And I would argue that it would have been very difficult for the Bulls to win without him, because it’s hard to win when you don’t have bigs who can play with the physicality that’s necessary to win at a championship level. And Dennis could meet the challenge.”

Rodman’s colorful tenure with the Bulls was one of the primary story lines covered Sunday night when the third and fourth episodes of the ESPN and Netflix documentary “The Last Dance” — a 10-part series built around Jordan’s final season with the Bulls in 1997-98 — aired for the first time. Among the Rodman stories covered Sunday night: His “vacation” to Las Vegas, one that went longer than the 48 hours that the Bulls were willing to allow him for a break.

The Pistons famously had “The Jordan Rules” when they were atop the NBA and holding off the up-and-coming Bulls during Detroit’s title runs in 1989 and 1990.

Armstrong said in 1998, Charlotte had its version of special rules as well — not for Jordan, but for Rodman.

“I mean, the guy just understood how to rebound,” Armstrong said. “We had an assistant coach on our staff at the time, Paul Silas. And Paul used to always tell us that what Dennis is doing, you can’t prepare for. He was that good. You couldn’t box him out. You had to face-guard him. The reason he was a great rebounder was he understood offensive schemes and he understood the timing of the shots.”

The Rodman rules didn’t work: He averaged 17.6 rebounds, by far the best in the series, and Chicago ousted Charlotte in five games.

“All the other things that went on around him, that was just Dennis,” Armstrong said. “But make no doubt about it — when he was between the lines, he was an excellent, excellent basketball player.”

Two new episodes of the documentary will air each Sunday night through May 17.