Carmen Electra’s basketball fandom wasn’t much more than wearing Jordans in high school and her awareness of Dennis Rodman was simply that the NBA bad boy had dated Madonna. 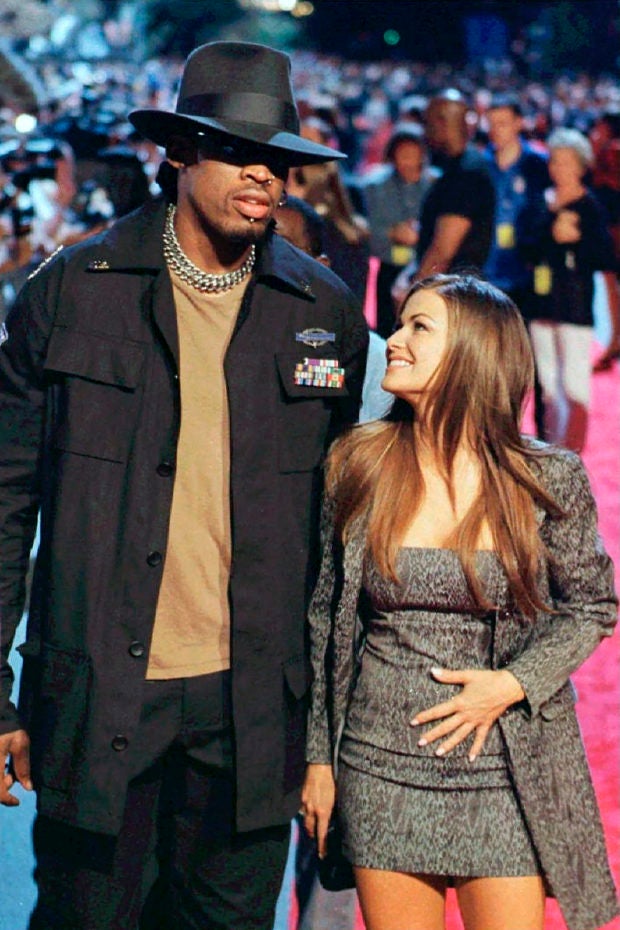 FILE – In this July 27, 1998, file photo, Chicago Bulls star Dennis Rodman and Carmen Electra are shown arriving at the opening of the Planet Hollywood restaurant in Montreal. Carmen Electra’s relationship with former Chicago Bulls star Dennis Rodman became a focal point of the “The Last Dance” — the ESPN and Netflix documentary series built around Michael Jordan’s final season with the Chicago Bulls in 1997-98. They wed in November 1998, filed for annulment nine days later, reconciled but divorced in April 1999. Watching the A-list relationship blossom back to life on the documentary helped her appreciate the wild time in her life when Rodman and the Bulls had a hold on her heart. (Ryan Remiorz/Canadian Press via AP, File)

But once the then-Chicago Bulls star, who used his hair as a colorful canvas and illustrated his body with tattoos, noticed the rising 1990’s entertainment star and “Playboy” model, he became enamored with Electra.

“We exchanged numbers and he would call and call and call,” Electra said. “I wouldn’t respond. Finally, one day I picked up the phone and he invited me to come hang out with him and I went for it. I went in.”

Electra, who turned 48 last week, has found herself once again in the spotlight after their relationship blossomed back to life in the documentary “The Last Dance” — the ESPN and Netflix documentary series built around Michael Jordan’s final season with the Chicago Bulls in 1997-98.

“Dennis was considered the bad boy of basketball,” Electra said, “and I like bad boys.”

Electra and Rodman were married, the Bulls won championships and the couple became tabloid sensations. She talked about some of the wild times in the documentary — which drew 6.1 million viewers across ESPN & ESPN2 last Sunday — including once hiding naked under the covers as Jordan banged on a hotel door trying to drag Rodman back to practice.

We were both naked, actually, when there’s a knock at the door, Dennis jumps up, I don’t know if he answered the door naked or not, I can’t remember that part because I was hiding. He just turned around to me and said, ‘It’s Michael Jordan. I’ve got to go practice.”

\
She later detailed her sexual dalliances with Rodman throughout the Bulls’ practice facility, everywhere from the training room to the court, and possibly even coach Phil Jackson’s office.

Rodman’s eccentricities transcended his basketball skills that led to NBA titles with the Detroit Pistons and Bulls and forged a path to the Naismith Memorial Basketball Hall of Fame.

He led the league in rebounding an NBA-record seven straight seasons, won consecutive defensive player of the year awards, and back-to-back titles with the Pistons before teaming with Jordan and Scottie Pippen for three championships in a row with the Bulls.

Electra’s career skyrocketed, her sex appeal had landed her roles in “Baywatch” and a hosting gig on MTV’s “Singled Out.”

She shuttled between jobs and trips to Chicago to be with Rodman and said she passed on numerous auditions to spend more time with him. She explained that Rodman could be a very quiet man who “loved to have a cheeseburger and a shake” before games and always called her “momma.”

The changes came when the final horn sounded.

“After the game, the party was on,” Electra said. “It would start with dinner. Then we would go to the strip club, after hours, … I was trying to keep up. I kept up for a long time. I literally felt like one of the boys trying to keep up with Dennis.”

Electra said the partying didn’t seem to slow Rodman, who at times could shrug off the previous night’s shenanigans.

“I almost think of him as not human,” Electra said. “I would have the worst, worst headaches in the morning and he would go to practice. A couple of times he may have been a little late.”

Electra, speaking on the phone from Los Angeles, said she was looking at a picture of Rodman (“so cool, so ahead of his time”) from their time together as she recalled their fiery relationship.

They wed in November 1998, filed for annulment nine days later, reconciled but divorced in April 1999. Electra, whose likeness is soon to appear on a mobile celebrity slot game, and Rodman share an agent and he helped reconnect the pair for a brief conversation months ago.

She said watching the documentary helped her appreciate her time with Rodman.

“Yes, we had a blast, and this wild love, but we had a lot of hard times, too. A lot of struggles,” she said. “No matter what, I’ll always wish him the best.”