‘Like Godfather’: Spoelstra recalls moment when Riley made him Heat coach 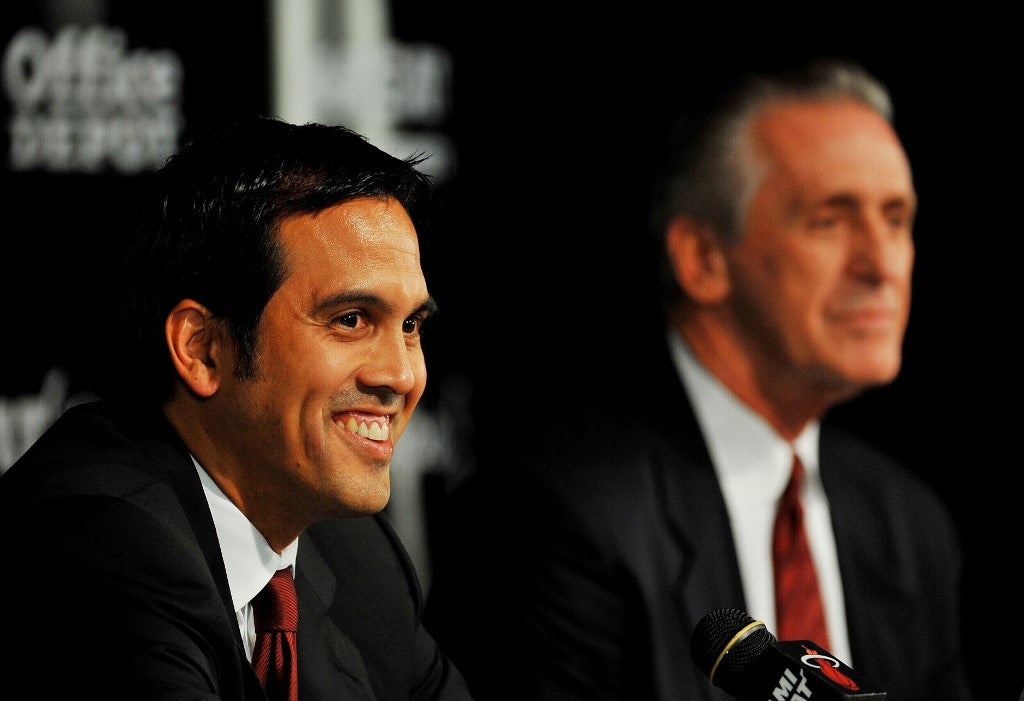 MANILA, Philippines—Pat Riley always had a reputation as one of the greatest minds and personalities in the NBA that his persona, and looks, resembled a dapper boss from an HBO show.

So when he handed Miami Heat’s coaching reins to the somewhat inexperienced Erik Spoelstra in 2008, the current head coach of the franchise described it as being in a family meeting with the Corleones.

“It would probably be as you imagined, like a Godfather scene,” said Spoelstra in an interview with Inside the NBA’s Ernie Johnson. “He brought me in after the season, the lights were down and I sat on the other side of the desk of him and I barely made out his face but he could see me.”

“He brought me in on a Saturday, and it was after our season where we won 15 games (15-67) that year and he had joked about it as I sit across from him on the plane. We’d be drinking wine and I would work on video edits, and he’d always joke with me and told me ‘you’re gonna be coaching this team’ and that used to freak me out.”

“If he wanted to give me a glass of wine faster, it was to threaten me that he was going to me the head coach. That seemed really intimidating at the time.”

Although his father Jon was a former executive in the league, Spoelstra was never pegged to be one of the heads of an NBA franchise let alone replace Riley, who had won five titles with the Showtime Los Angeles Lakers and the Heat.

Spoelstra started as the Heat’s video coordinator in 1995 then became an assistant coach in 1997 until he replaced Riley, who focused on his duties as team president, in 2008.

Despite spending nearly half of his life with the franchise, Spoelstra said that he had never expected to be entrusted with the team and Riley’s decision to promote him came of out left field.

“This is going to be like up ‘you’re up in a bird’s nest and I’m just going to push you off a branch, and you’re going to figure out how to fly but you have enough experience, you worked for great people, and you’ve had lots of experience in the playoffs,’” said Spoelstra, who added that Riley gave him just two days to prepare to officially become the Heat’s head coach.

Spoelstra, who was introduced to the media on the Monday following his meeting, eventually became one of the league’s brightest minds when he led the Heat to back-to-back titles in 2012 and 2013 across four straight Finals appearances.

“He told me to ‘take a couple of days to get you S, H, I, T together and Monday is the press conference. All right, thanks, see you then.’”

Read Next
WBC setting up judging from home via video for pro boxing
EDITORS' PICK
SWS: Over 12M Filipinos still jobless as of May 2021
Smart celebrates all kinds of ‘#SimplyLove’ for Pride Month
Gilas out to prove Korea win not a fluke; Tab fires back at ‘lucky shot’ remark
Smart brings KCON:TACT especially 4U to subscribers from June 19 to 27
WATCH: INQside Look with Fil-Am actress Aina Dumlao
Brazil set to pass half a million COVID-19 deaths
MOST READ
The opposition’s dilemma
Underdog Dasmariñas vows to fight to the death vs Inoue
Chavit Singson joins Nationalist People’s Coalition
Rajko Toroman praises, warns Gilas Pilipinas
Don't miss out on the latest news and information.