The Shots: Ehlo, Russell playing a role in 'The Last Dance' | Inquirer Sports

The Shots: Ehlo, Russell playing a role in ‘The Last Dance’ 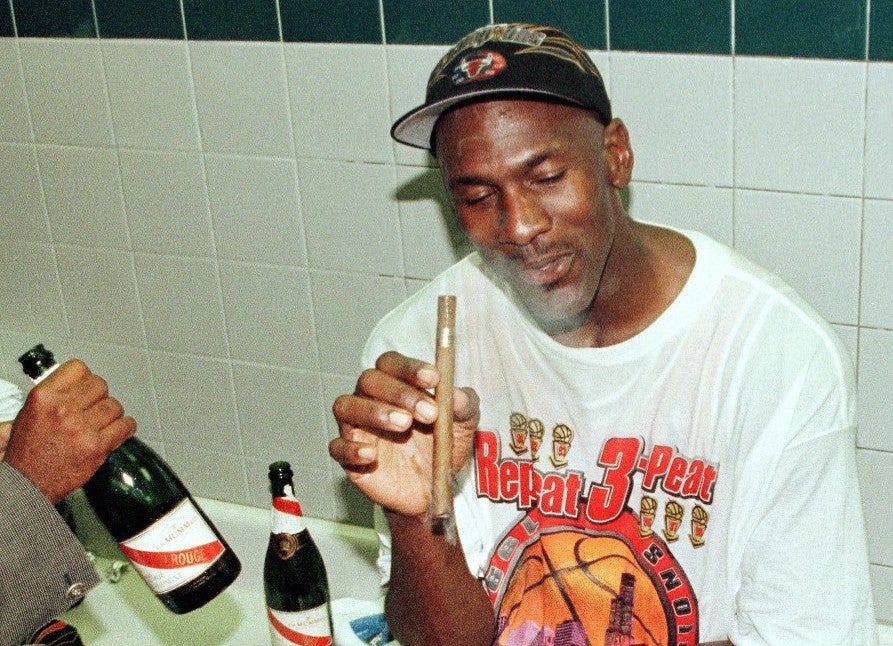 Michael Jordan of the Chicago Bulls enjoys a cigar in the locker room 14 June 1998 after winning game six of the NBA Finals against the Utah Jazz at the Delta Center in Salt Lake City, UT. Jordan scored the winning basket to win the game 87-86 to win their sixth NBA Championship. Various reports 12 January say that Jordan plans to announce his retirement at a 13 January news conference in Chicago. (Photo by MIKE NELSON / AFP)

Bryon Russell has long insisted that he got shoved.

Doesn’t matter if they’re right or not. They each shared an ultimate moment with Michael Jordan, and Jordan came out on top each time. They’ll be on highlight reels forever and “The Last Dance” — the ESPN and Netflix 10-part documentary series about Jordan’s Chicago Bulls that ends on Sunday — only freshened the familiarity fans have with two of the most-replayed shots in NBA history.

“After seeing it so many times on commercials and always being talked about, I’ve figured that I’ll just face this,” Ehlo said. “There was nothing more I could do.”

Ehlo was guarding Jordan for the final shot of the 1989 Eastern Conference series between Cleveland and Chicago — “The Shot,” it still is known by in those cities. Russell was guarding Jordan for what became his final shot in a Bulls uniform, the one that gave Chicago the 1998 NBA title over the Utah Jazz. Jordan knocked down the dagger shots in both instances, dragging an unwitting Ehlo and Russell into spots in history that they’d likely not own.

The situations are incredibly similar: Jordan and the Bulls down by exactly one point in the final seconds of a playoff game, a jumper from just beyond the foul line to decide the outcomes. Ehlo and Russell even wore the same number — 3 — for those pivotal moments. Jordan made 14,380 field goals in his NBA career, and those two shots over Ehlo and Russell are certainly among the most-replayed of them all.

“Both of us were in that same situation,” Ehlo said. “I assume that he probably gets tired of hearing, like I did, that Michael does it to everybody. In his defense, everybody said Michael pushed off. Me, I didn’t have that. He just hung in the air a lot longer than me.”

Russell declined to be interviewed for this story. He has previously said Jordan pushed him on the play that gave Chicago the lead in the final seconds of Game 6 of the NBA finals, a sequence where Jordan cuts to his right and appears to put his left hand on Russell as the Jazz defender begins to stumble out of position. Jordan got a wide-open jumper, swished it and the Bulls won their sixth and final title.

“I’m pretty sure I played better defense than anyone who played defense against him,” Russell said in 2009.

There is no consensus about that play. Some, like Golden State’s Stephen Curry, have said Jordan pushed off. Jordan, of course, feels otherwise. And in 2017, Utah Supreme Court Chief Justice Matthew Durrant officially ruled a foul took place.

“He pushed off,” Durrant said. “And if you think I don’t have the power to decide that, you haven’t read the Utah Constitution.”

Controversy about that shot has existed for 22 years.

When it comes to the shot Ehlo defended, controversy started only recently.

Part of an early episode in “The Last Dance” surrounded who should have guarded Jordan on the final shot of Game 5 of that best-of-five series in 1989. Ron Harper, who played for the Cavs at the time and eventually became a Jordan teammate in Chicago, said he asked to guard Jordan for the final play.

Ehlo doesn’t recall Harper saying that. Other members of the Cavs, including Larry Nance, have also said they have no such memory either. Harper guarded Jordan plenty in that game, without a ton of success. And it should be noted that Ehlo had some strong defensive moments against Jordan that day, forcing him into an airball early in the fourth quarter and drawing raves from television announcers Dick Stockton and Hubie Brown throughout the contest.

Ehlo was having a grilled cheese sandwich when his moment in “The Last Dance” came on. When he heard Harper speak, he dropped the sandwich in a bit of disbelief.

“It almost made me giggle,” Ehlo said. “I was on the floor with him a lot and he’d say, ‘Hey, take Michael, let me rest.’ It wasn’t even a coaching thing.”

Ehlo got a hand near Jordan on the shot attempt, but Jordan double-clutched and kept flying to his left, out of Ehlo’s reach. The shot went in, Jordan punched the air and Ehlo fell to the floor in disbelief.

Ehlo said he got over The Shot quickly; after the play, his father called him to tell him how fun it was to watch the final moments, and that he was proud of him. It was hardly the toughest moment of Ehlo’s life; years later, he battled addiction to painkillers after a back surgery in 2010, checked into a rehab center in 2013 and went through some very public embarrassment.

“I’ve always had unbelievable support from my family,” Ehlo said. “And they made sure nothing kept me down.”