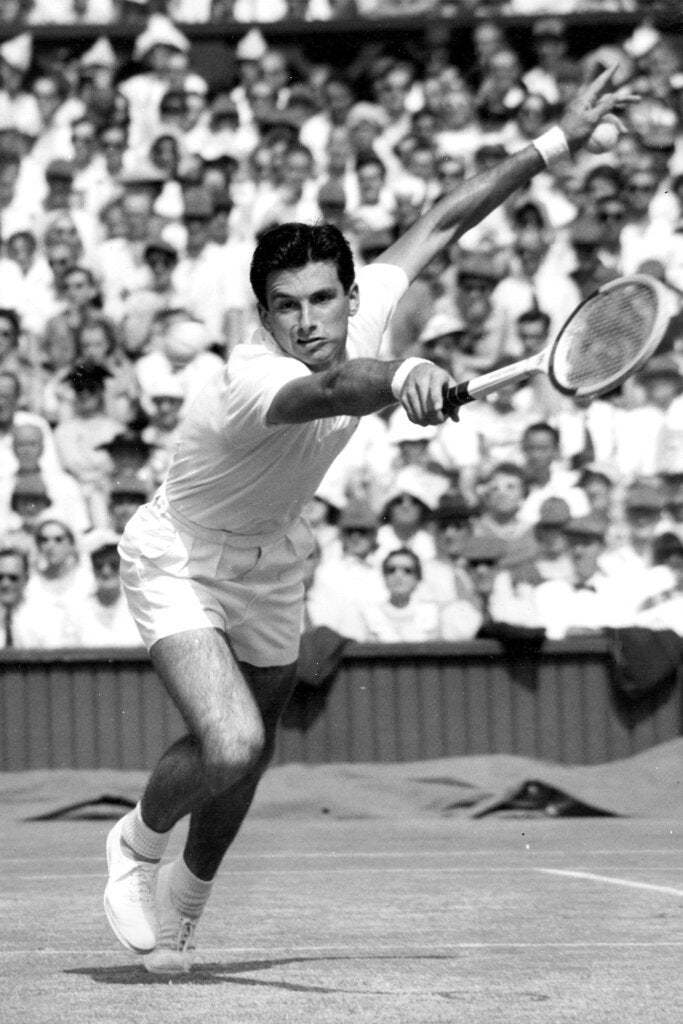 FILE – In this July 3, 1957, file photo, Australian tennis player Ashley Cooper leans forward to return service during his two-hour match against compatriot Neale Fraser at Wimbledon. Cooper, who won four Grand Slam singles titles including the Australian, Wimbledon and U.S. championships in 1958, has died. He was 83. Tennis Australia said Friday, May 22, 2020, that the former No. 1-ranked player and long-time administrator had died after a long illness. ((AP Photo/File)

BRISBANE, Australia — Ashley Cooper, who won four Grand Slam singles titles including the Australian, Wimbledon and U.S. championships in 1958, has died. He was 83.

Tennis Australia said Friday that the former No. 1-ranked player and long-time administrator had died after a long illness.

Cooper led Australia’s Davis Cup team to victory over the United States to retain the title in 1957. But after the result was reversed in a loss to the Americans the following year he was so upset, according to Tennis Australia, that he considered withdrawing from a professional contract because he felt he owed the country more.

After a back injury ended his professional career in 1959, Cooper returned to Brisbane, Australia, to run a business and work as an administrator in the sport. He was involved in moving the state’s main tennis facility from Milton — which hosted an Australian Open and three Davis Cup finals — to Tennyson, where Pat Rafter Arena is now the venue for the annual Brisbane International.

“Ashley was a giant of the game both as a brilliant player and an astute administrator and he will be greatly missed,” Tennis Australia chief executive Craig Tiley said. “Ashley was also the most humble of champions and a great family man.”

“He was a wonderful champion, on and off the court. And what a backhand! So many cherished memories,” Laver wrote. “Farewell my friend.”

Laver said Cooper was among a group of players including Ken Rosewall, Frank Sedgman and Lew Hoad who “ruled the world in tennis, a whole group from the 50s to the 70s.”

A right-handed serve-and-volley player, Cooper won four Grand Slam singles and four Grand Slam doubles titles in the amateur era. In 1958, his only loss in the Grand Slams came in the semifinals at the French championships.