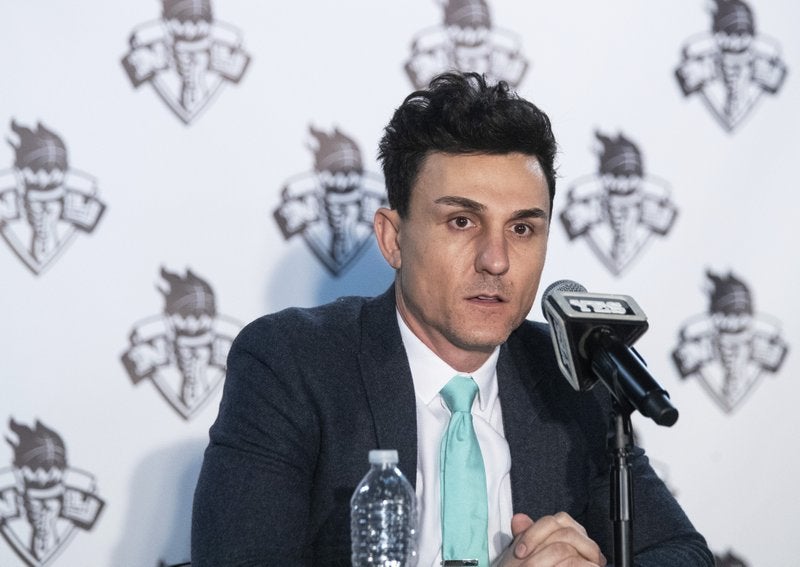 In this Jan. 8, 2020, photo, New York Liberty’s general manager Jonathan Kolb speaks to reporters during a news conference at Barclays Center in New York. Kolb knew that he and first-year coach Walt Hopkins would have to make some tough decisions on the team’s roster this year. He just didn’t think they’d have to do it so quickly and without seeing players compete on the court in training camp. The WNBA and the players’ union decided that teams would have to get their rosters under the salary cap by Tuesday, May 26, so that the players could start getting paid on June 1. (AP Photo/Mary Altaffer)

NEW YORK — New York Liberty general manager Jonathan Kolb knew that he and first-year coach Walt Hopkins would have to make some tough decisions on the team’s roster this year.

He just didn’t think they’d have to do it so quickly and without seeing players compete in training camp. The WNBA and the players’ union decided that teams would have to get their rosters under the salary cap by Tuesday so that players could start getting paid on June 1.

It’s left many teams with tough decisions on who they will cut and little time to figure it out.

“It is the worst part of this job,” Kolb said in a phone interview. “These are dreams that are suddenly altered and you’re a large part of that. These are human beings, not just basketball players.”

Connecticut Sun coach and general manager Curt Miller had set up his training camp roster so a few position battles would determine the final spots on the team. Now he’ll have to make choices a different way.

“Ultimately we have to decide, because we can’t do it all together, what skill set strength of theirs makes most sense to round out our roster,” Miller said.

Teams usually have to cut their rosters to get under the salary cap before the regular season begins, which would have been on May 14. The WNBA postponed the start of the season in early April because of the coronavirus pandemic and is still focusing on a handful of scenarios that would allow it to play this year.

Teams typically would be able to evaluate players by their on-the-court actions. Now it’s more based on how quickly they pick things up on Zoom conference calls or how well they understand plays online.

“The league office didn’t foresee a pandemic,” Kolb said in a phone interview. “They are doing the best they can do. It doesn’t take away from how difficult this was for us. We wish we could keep everybody or have some contingencies in place.”

The Liberty have six rookies on the roster, including No. 1 draft pick Sabrina Ionescu. They also have five international players, which has made life a little more difficult for Kolb and Hopkins than for some other teams because of the logistics involving travel.

“It’s definitely impacting us the most,” he said. “We have the most international players and with so much uncertainty and lack of answers at the moment, it puts us in a position to have to make decisions.”

Kolb said he’s been in constant contact with the international players, who are in China, Sweden, Australia, France and Canada.

“We’re taking everything into consideration including things we never anticipated before like long flights,” he said. “Now it’s a big deal. How do they feel about that? Is our country going to allow these players into the United States? There’s still so many unknowns.”

Kolb said the team has been working with the league and its own immigration lawyers to try to figure things out for the foreign players. There is a chance one or more of the Liberty’s international players could decide she wants to stay abroad. The team could then suspend her for the season, which would open up another roster spot.

While players who are cut won’t get paid, they will be offered health insurance until the end of June. There also is a chance that being let go won’t mean the end of their WNBA dreams.

Miller noted that the Sun cut Natisha Hiedeman in training camp last year and she came back to Connecticut when Layshia Clarendon got hurt late in the season. Hiedeman wound up playing in the semifinals and WNBA Finals.

“You try to lead with compassion and empathy,” Miller said. “I don’t know any other way to lead in this decision with them. These are the cards that we’re all dealt and it doesn’t mean it’s fair. I’ll tell them the story about Natisha and not to let a temporary set back define you.”