Serie A to restart in June with 4 catchup matches 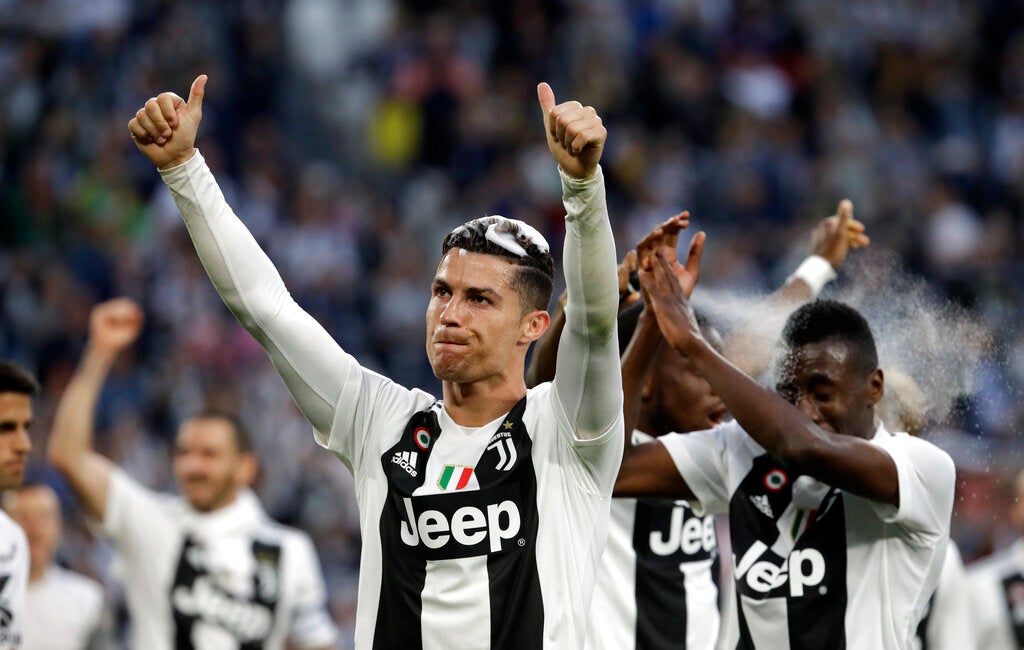 FILE – In this April 20, 2019 file picture, Juventus’ Cristiano Ronaldo celebrates at the end of a Serie A soccer match between Juventus and AC Fiorentina, at the Allianz stadium in Turin, Italy. The Italian minister of sport Vincenzo Spadafora announced Thursday, May 28, 2020 that the Serie A will restart on June 20, to conclude the championship after the coronavirus stop. (AP Photo/Luca Bruno)

MILAN— The Serie A will resume with four catchup matches that were postponed as Italian sports shut down in the coronavirus outbreak.

The league began formalizing the calendar in a meeting of the 20 clubs on Friday, the day after sports minister Vincenzo Spadafora gave the league the all-clear to resume on June 20.

The Italian Cup, which was stopped at the semifinal stage, will be completed the week before the league restarts.

The league said in a statement it will complete the 25th round with the four postponed matches — Atalanta vs. Sassuolo, Hellas Verona vs. Cagliari, Inter Milan vs. Sampdoria, Torino vs. Parma — on the weekend of June 20-21, and schedule the next round of matches in the following week.

Italian media reported Atalanta’s home match will be played first as a symbolic gesture. Atalanta is in Bergamo, which was one of the provinces hit hardest by COVID-19.

Sassuolo was also the last team to play, alongside Brescia, before Serie A was halted on March 9. Striker Francesco Caputo celebrated the first of his two goals that day with a sign in Italian that read “It will all be OK. #Stayathome.”

There are 12 rounds remaining in Serie A.

Juventus, which is bidding for a record-extending ninth successive title, has a one-point advantage over Lazio. Third-placed Inter Milan is nine points behind Juventus with a game in hand.

The final of the Italian Cup will be on June 17 in Rome. The first legs of the semifinals had already been played: AC Milan drew with Juventus 1-1, and Napoli won at Inter Milan 1-0.

The dates and times of all the matches will be announced in the next few days, the league added.

Juventus is also involved in the Champions League. If it goes all the way in both cup competitions it could play 20 matches in 78 days before the new season.