MANCHESTER, England  — The Premier League was given government approval on Saturday to press ahead with its June 17 restart although players will have to stay apart during goal celebrations and disputes to maintain social distancing. 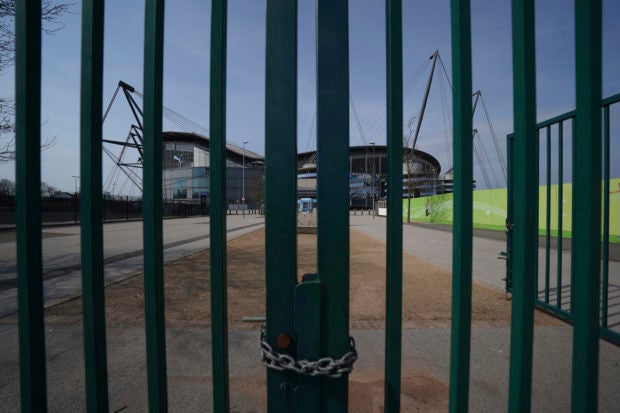 FILE – In this file photo dated Thursday, April 9, 2020, gates stand locked outside the closed English Premier League soccer Manchester City Etihad Stadium, in Manchester, northern England. Guidance for sports bodies was published by the government on Saturday May 30, 2020, as COVID-19 lockdown restrictions are being eased further, allowing Sports events to resume in England from upcoming Monday, without any spectators and providing they comply with the government’s coronavirus protocols. (AP Photo/Jon Super, FILE)

Further details of the league’s plans for dealing with coronavirus cases have been disclosed with clubs likely to have to play even if they only have 15 fit squad members.

In a further boost to the league’s restart plans, there were no positives in the fourth round of twice-weekly testing. Tests were conducted on 1,130 players and club personnel on Thursday and Friday as contact training resumed.

The season was suspended in March and the government is now willing to allow games without fans if coronavirus prevention protocols are followed by those in stadiums.

The government said, where possible, social distancing must be maintained at games including “during any disputes between players and referees, or scoring celebrations.” But there is a recognition players will not always be able to stay 2 meters (6 feet) apart while playing.

“There is still much work to be done to ensure the safety of everyone involved,” Premier League chief executive Richard Masters said. “This includes consulting with our clubs, players and managers — along with all our other stakeholders — as the health and welfare of our participants and supporters is our priority.

The league agreed to a government request for some games to be broadcast for free, whereas they are usually only available on subscription channels, to make them accessible to fans unable to attend games.

But the police still want Liverpool’s key games — before it almost certainly clinches the trophy — to be played away from the city and in neutral stadiums. Liverpool is two wins from ending its 30-year title drought, 25 points clear with nine games to go.

“We need to ensure people don’t congregate around stadiums,” Culture Secretary Oliver Dowden said at a Downing Street news conference. “I think fans will behave responsibly. I think the British people have shown real good common sense throughout all this. I am sure they will understand the need to watch at home.”

Clubs agreed during a conference call on Thursday to restart on June 17 even though there are still thousands of new COVID-19 infections each day in England.

West Ham vice chair Karren Brady said the latest virtual meeting of club executives featured a long discussion about “what constitutes having a team fit enough to compete in the games left to play.” Having only four substitutes was deemed sufficient.

“There are obvious and genuine concerns about what happens to your match results if your club has a number of players testing positive for coronavirus, or is in self-isolation, and as a result you simply cannot field your usual or strongest starting XI,” Brady wrote in a column in Saturday’s editions of “The Sun” newspaper.

“Well, as long as you have 15 fit players (including one goalkeeper) made up from either your 25-man squad list or from your under-21s you will be deemed to have a team fit enough to fulfill the fixture.”

Clubs will discuss on another call on Thursday what to do if teams don’t have 15 fit players or if the season is still curtailed, based on it never resuming or being suspended again due to a new spike in COVID-19 cases.

“The Premier League are recommending a points-per-game formula to decide the award of places,” Brady said. “This is a straightforward model whereby a team’s number of points is simply divided by the number of matches they have played.

“The resulting figure is the average number of points each team has earned in each match of the season so far. And on this calculation three teams will be relegated — what a heartbreaking end to the most unfortunate season in history.”

West Ham is two places above the relegation zone but only because the east London club has a better goal difference than Bournemouth and Watford.

“Myself and a number of other clubs are reluctant to decide a future Premier League shareholder’s fate by a formula rather than a football match,” Brady said.

The Premier League season is now due to end on the weekend of July 25-26, more than two months after originally scheduled.

Though the COVID-19 deaths per day have fallen in Britain since the peak in April, another 215 were still reported on Saturday by the government, bringing the known death toll in all settings including hospitals and care homes to 38,376.