Muller the chef serves up title-winning assists for Bayern 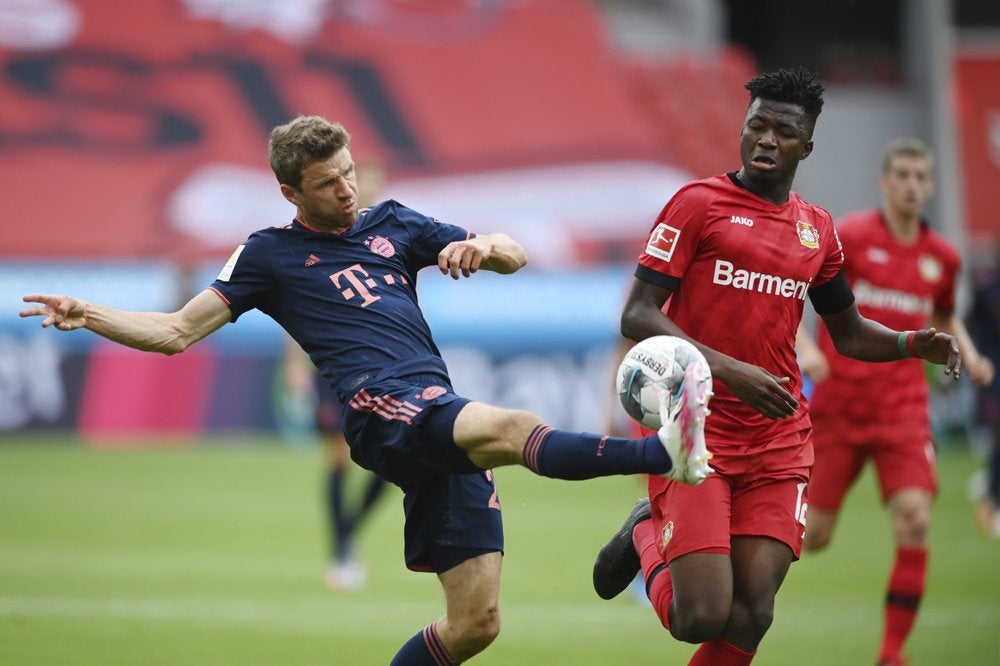 DÜSSELDORF, Germany — Call them Road Runner and The Chef.

Alphonso Davies and Thomas Müller have built an effective and affectionate partnership this season, and it’s driving Bayern Munich toward a record-extending eighth straight German title.

“I call him Chef,” Davies said in televised comments after Müller broke the German league record with his 20th assist of the season Saturday. “He gives you assists, he gives you goals, whenever, whatever you need.”

Müller’s two assists in Saturday’s 4-2 win over Bayer Leverkusen took him past Kevin de Bruyne’s 19 assists for Wolfsburg in 2014-15, which the league said was the most by any player in records going back nearly three decades. Bayern played the game wearing armbands with the message “Black Lives Matter,” in reference to the movement’s many global anti-racism protests.

In calling Müller “Chef”, Davies was returning the favor after the experienced German dubbed the Canadian left-back the “FC Bayern Road Runner” for his ability to chase down seemingly lost causes in a crucial 1-0 win over Borussia Dortmund last month.

Davies and Müller seemed on opposite paths at the start of the season. The 19-year-old Canadian was forcing his way into the starting lineup, while the 30-year-old Müller had been dropped by the German national team and was increasingly a bench player for Bayern under coach Niko Kovac.

That all changed when Kovac was fired after an embarrassing 5-1 loss to Eintracht Frankfurt in November. His assistant Hansi Flick was put in charge — initially only for a few games — and restored Müller to his key role in Bayern’s midfield.

The move immediately paid off, with Müller assisting on two goals in Flick’s first game, a 4-0 hammering of Dortmund, then two more against Fortuna Düsseldorf a week later. In 2020, he has played in all of Bayern’s games and started all but one of them.

Flick has allowed Müller the creative freedom he needs to dictate the game in midfield, finding space to bring teammates into threatening positions.

Davies and Müller have combined at key moments too. The Canadian set up Müller to score in Bayern’s 5-2 revenge win over Frankfurt last month and also in December for a goal to take the lead against Tottenham in a 3-1 win in the Champions League.

Bayern has a seven-point lead with four games remaining so only a dramatic collapse would stop the Munich club retaining the Bundesliga title yet again.

Bayern is also eyeing another German double, with Frankfurt again their opponent in the cup semifinal Wednesday, and the Champions League — whenever that resumes.

Europe’s leading club competition was suspended in March due to the coronavirus pandemic, with Bayern leading Chelsea 3-0 after the first leg of their last-16 matchup. The Champions League is set to resume as a mini-tournament this summer. UEFA is eyeing Germany as a possible host.

Bayern’s challenge will be staying in shape in what could be several weeks without games after the German league’s scheduled finish June 27 before the Champions League resumes, likely in August.

Müller’s form also puts pressure on Germany coach Joachim Löw to return the 2014 World Cup winner to the national team in time for the postponed European Championship next year. After Müller’s triumphant resurgence for Bayern, that no longer seems so unlikely.