Player unease as US Open to go ahead without fans 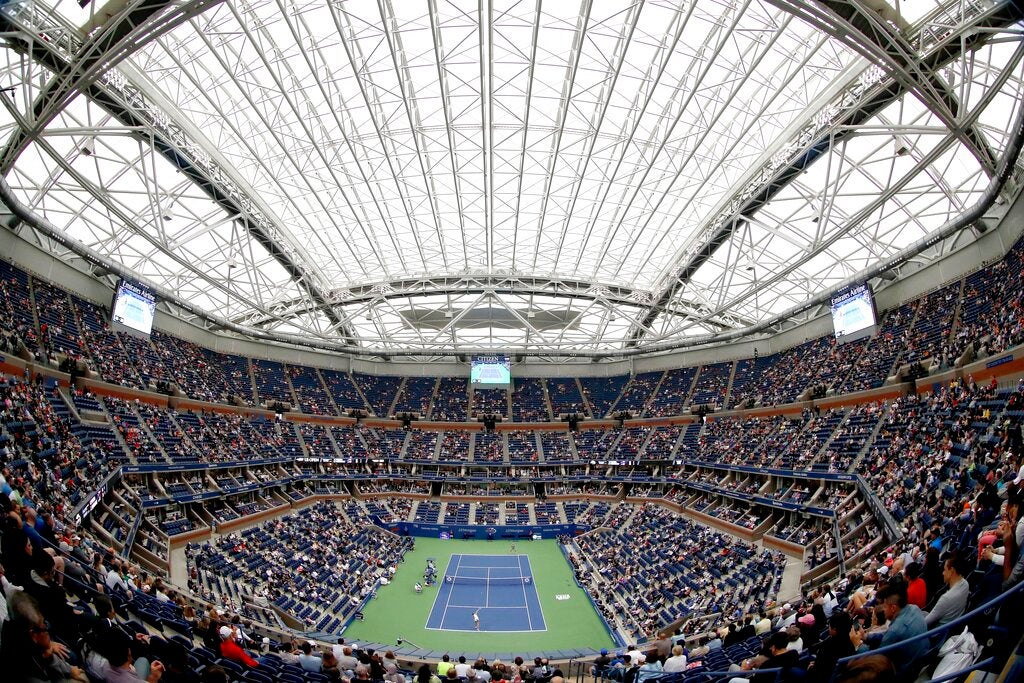 FILE- In this Sept. 6, 2017, file photo, fans fill the stands at Arthur Ashe stadium as Karolina Pliskova, of Czech Republic, plays CoCo Vandeweghe, of the United States, during the quarterfinals of the U.S. Open tennis tournament in New York. Governor Andrew Cuomo announced, Tuesday, June 16, 2020, that the U.S. Open will be played in Queens from Aug. 31 to Sept. 13, but without fans in attendance. (AP Photo/Adam Hunger, File)

The US Open tennis championships will go ahead as scheduled in August but without spectators, officials confirmed on Tuesday.

After weeks of uncertainty surrounding the tournament — which is being staged in the epicentre of the US coronavirus crisis — New York Governor Andrew Cuomo formally gave the event the green light.

The @usopen will be held in Queens, NY, without fans from August 31 to September 13.

“The @usopen will be held in Queens, NY, without fans from August 31 to September 13,” Cuomo announced on Twitter.

The New York leader said the US Tennis Association would take “extraordinary precautions” to protect players and staff during the event.

“It will be held without fans, but we can watch it on TV, and I’ll take that,” Cuomo later said during a briefing.

Safety protocols in force at the tournament include testing, additional cleaning, extra locker room space, and dedicated housing and transportation.

The decision had been anticipated after reports on Monday said the USTA’s plans for the tournament had received support from the ATP and WTA Tours.

The ATP/WTA Cincinnati hardcourt event — the Western & Southern Open — will also be staged at the USTA’s Billie Jean King National Tennis Center as a lead-in tournament.

The USTA opted to move the tournament to New York in order to minimize travel for players taking part in both tournaments.

USTA Mike Dowse said the US Open would be held in the “safest manner possible, mitigating all potential risks”.

Several leading players have expressed reservations about the prospect of playing a tournament in New York, and it remains to be seen how many of the game’s elite will commit to playing the event.

World number one Novak Djokovic has been one of the most vocal critics, saying that safety measures and restrictions on the numbers of support staff allowed for each player were problematic.

“We would not have access to Manhattan, we would have to sleep in hotels at the airport, to be tested twice or three times per week,” Djokovic said.

“Also, we could bring one person to the club, which is really impossible.

“I mean, you need your coach, then a fitness trainer, then a physiotherapist.”

Djokovic’s misgivings have been shared by defending men’s singles champion Rafael Nadal, who would be chasing a 20th Grand Slam title at Flushing.

Nadal, the world number two, said earlier this month he would not play in New York if the tournament was taking place now, adding that tennis should not resume until it is “completely safe” for competitors.

Australia’s Nick Kyrgios meanwhile reacted with disgust about reports indicating the tournament was set to go ahead.

Smh – people that live in the US of course are pushing the Open to go ahead 🤦🏽‍♂️ ‘Selfish’ I’ll get my hazmat suit ready for when I travel from Australia and then have to quarantine for 2 weeks on my return.

“People that live in the US of course are pushing the Open to go ahead ‘Selfish’ I’ll get my hazmat suit ready for when I travel from Australia and then have to quarantine for 2 weeks on my return,” Kyrgios posted on Twitter.

“To be honest, I don’t feel like going … we can’t do anything, we can’t even really enjoy the tournament. And, above all, we’ll play without fans which is the worst thing there is for me,” Kvitova said.

“But it will be a tournament where you can make money after a terribly long time and I think many girls will go.”

However, Karolina Pliskova, the world number three and 2016 US Open finalist, said she was “definitely flying” for the tournament.

“I’ve been at home for six months now. It’s important to start. The sooner we start, the sooner we will play before an audience,” Pliskova said.

“If we stay home waiting for the ideal situation, we may wait forever. The tournament is better with fans but if the players like tennis, they should go.”