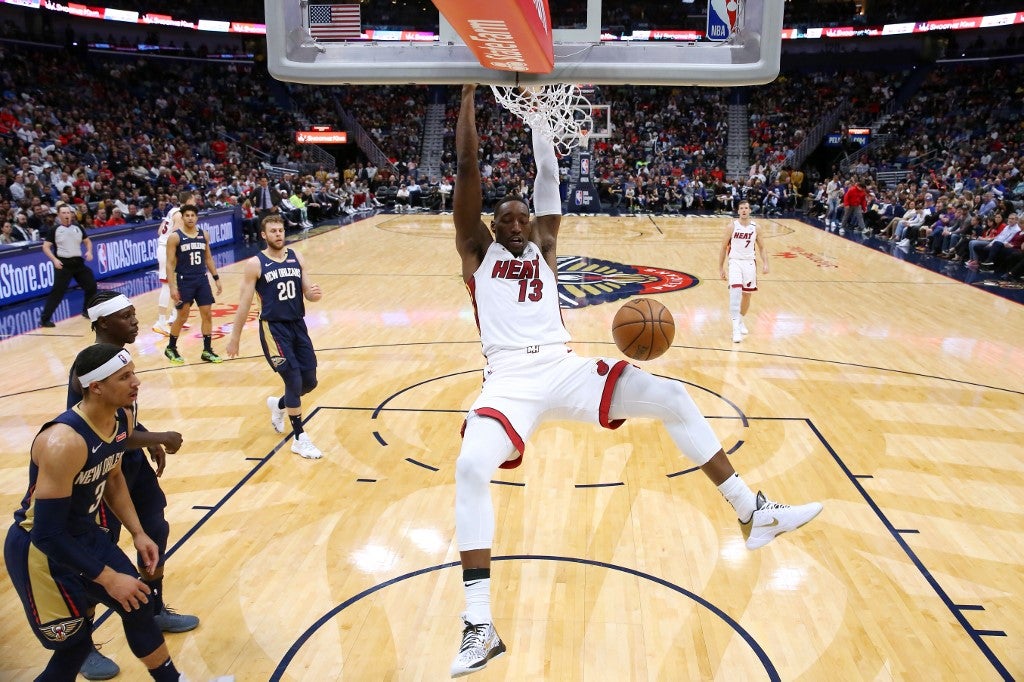 Bam Adebayo #13 of the Miami Heat dunks during a game against the New Orleans Pelicans at the Smoothie King Center on March 06, 2020 in New Orleans, Louisiana.  Jonathan Bachman/Getty Images/AFP

Bam Adebayo thinks injuries could be more prevalent than usual when the NBA gets back on the floor next month, given the demands that will be on players’ bodies after a long layoff.

Miami’s All-Star center is also thinking about the financial risks.

Adebayo confirmed Tuesday that he is among five players — a group who could soon graduate from rookie contracts to extensions worth in excess of $100 million — seeking assurances from the NBA about if they’ll be protected in the case of catastrophic injury when the season resumes at the Disney campus near Orlando, Florida.

“Our whole thing was, ‘Look, we’re all due for extensions and we want to make sure that going into this bubble we are safe and we don’t get hurt,’” Adebayo said. “If we get hurt, we still have some backups … something in the back pocket that ensures that we still get paid.”

Adebayo said he, Utah’s Donovan Mitchell, Boston’s Jayson Tatum, Sacramento’s De’Aaron Fox and the Los Angeles Lakers’ Kyle Kuzma met with the union last week with hopes that the league will pick up at least the majority of the tab for what would be a very costly policy against their future earnings.

National Basketball Players Association executive director Michele Roberts said Tuesday she is optimistic that there will be some sort of decision that satisfies the players.

“Those are still ongoing discussions with the league, but there’s no question Bam and others in that situation are concerned about this,” Roberts told The Associated Press. “These are issues that are part of the world that we live in and … these circumstances are unique; he hasn’t played in a while and we have this virus. So, because of the unique circumstances, we are working with the league to get Bam and other players assurances that they are going to be protected.”

The cost of such a policy for three months — which would cover the period in which those players get to the Disney-ESPN complex through the end of the NBA Finals — is expected to be at least $400,000, a person with direct knowledge of the talks told AP. The person spoke on condition of anonymity because those details have not been revealed publicly.

Adebayo intends to play when the season resumes either way, adding that he and Mitchell, Tatum, Fox and Kuzma will likely discuss the matter further.

“Our ultimate goal is to play,” Adebayo said. “So, I don’t want anybody thinking, ‘If they don’t get their insurance, they’re not playing.’ No, we want to play. That’s the whole point. We want to play and give our teams the best chance of winning a championship. But at the end of the day we’re also thinking about our families and our lives and how they could change if we get hurt.”

By the time games resume on July 30, it will have been more than 4-1/2 months since the league has seen a real contest. The NBA suspended its season March 11 because of the pandemic, and players couldn’t resume even voluntary on-court workouts for about two months. No team can resume full-scale practices until the arrivals at Disney.

Adebayo does not think three weeks of training camp at Disney will be enough to get ready for the resumption of the season, which is why he predicts injury rates will climb.

“I hope nobody gets injured, but I think a lot of people will get injured,” Adebayo said.