Toroman: Gilas could draw inspiration from European style of play 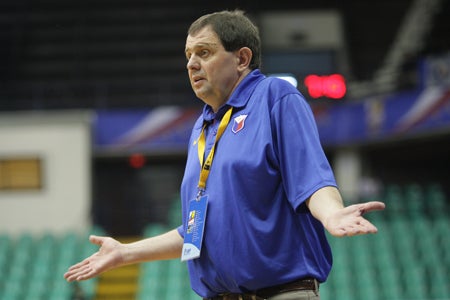 MANILA, Philippines — Rajko Toroman has seen the Gilas Pilipinas program grow from a team of dedicated upstarts to a system that became one of Asia’s best in a span of a decade.

As the Gilas program’s first head coach, Toroman is very much familiar with Philippine basketball even though he’s relinquished his spot in the national team for years now.

Toroman, be it as an insider or an outside observer, said that the problems that plagued his Gilas before is long gone with big men such as June Mar Fajardo, Japeth Aguilar, and Poy Erram all ready for international competition.

However, Toroman thinks every iteration of Gilas should never be stuck with just one playing scheme and that tactics should be developed for the players to play at the best of their abilities.

It was during Chot Reyes’ tenure that Gilas deployed a dribble-drive system to make use of its quick guards that could compensate for the lack of size. And it did wonders for the first part with the Philippines securing a spot in the 2014 Fiba World Cup.

But Toroman said that it should not always be the case.

Reyes’ dribble-drive system eventually ran its course in the following tournaments especially with criticisms on how June Mar Fajardo, who was in the middle of his incredulous six straight MVP campaigns in the PBA, was used in a limited capacity.

“In that time with Chot Reyes, we have discussions about the dribble-drive system which is good for the Philippines but dribble-drive cannot be the philosophy. It can be just one of the systems that you need,” said Toroman, who now handles the Indonesian national team,  in the Coaches Unfiltered podcast.

“It cannot be the only philosophy you have to put a lot of other things offensively, defensively, to make your tactic very competitive with other countries.”

Legendary PBA center Ramon Fernandez, winner of four MVPs, even criticized Reyes saying that Fajardo was relegated to a screener instead of becoming an inside threat in the post.

Toroman added the Philippines can take inspiration from how Europeans play their systems where every player is given an outlet to make use of their strengths instead of just following one rigid measure.

He pointed out that it’s better to have more players producing respectable numbers instead of just one man who dominates the offense and grabs a ton of rebounds.

“The Euro Cup, Euro League, is a more tactical game,” said Toroman, who hails from Sebia. “A player with 15 or 16 points and seven or eight rebounds is a great player. There are totally different measures about their contributions on the court.”

“When you put in the tactics, you also have to take care about the materials. You don’t necessarily have to copy everything that are being done in Europe but you have to see what you can use with your players.”

Toroman added that with the Philippine players becoming bigger and more athletic, coaches should focus more on the athletes’ strengths.

He pointed out the likes of Kiefer Ravena, Thirdy Ravena, and CJ Perez as athletic guards who can play both positions in the backcourt and even extend to the small forward role.

“The job of the coach is to find the best philosophy, the best system in the offense using the strength of the players,” said Toroman.