Boxing fights out of corner, but Pacman mum on plans 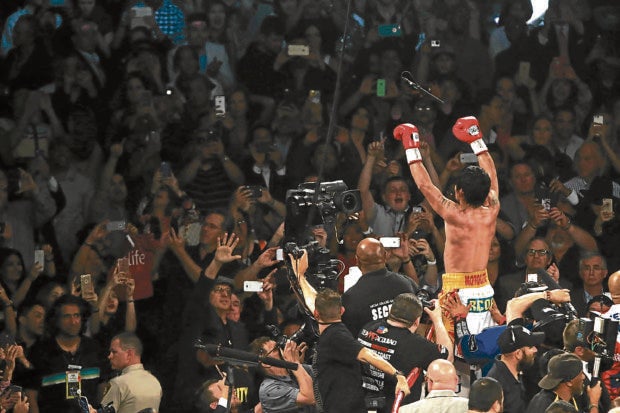 Manny Pacquiao thrives fighting in front of huge crowds—like
he did in decisioning Timothy Bradley Jr. in 2016. —REM ZAMORA

Keith Thurman has been calling him out. His business manager wants him to tango with Conor McGregor. His Hall of Fame trainer has brought up the name of a dangerous middleweight. His former promoter wants to set up a bout against a young welterweight star.

Through all that, Manny Pacquiao hasn’t made his plans clear yet—or if he even plans to fight in a boxing environment reshaped by the coronavirus pandemic.

Filipino Mike Plania stormed through boxing’s return recently, forging a mammoth upset over Joshua Greer Jr. in a bout whose spotlight was stolen by the audience—or the absence of it.

Fans were banned from MGM in Las Vegas as part of the health measures initiated to secure boxing’s return to live events from a monthslong health crisis that hasn’t shown signs of abating. Is Pacquiao, who thrives on the adoration of fans, willing to fight in an empty arena?

And if the world’s only eight-division champion says yes, the question remains: Who will he fight?

Last week, trainer Freddie Roach floated the name of strapping middleweight champ Gennady Golovkin as the next possible opponent of Pacquiao—a dangerous choice from someone who not too long ago clamored for the Filipino ring icon’s retirement.

Pacquiao fights at welterweight but in the past few fights climbed the ring even lighter than 147lbs, 13 lbs lighter than the middleweight limit. Splitting the difference for a catch weight could spell disaster for both fighters, according to Golovkin’s former trainer Abel Sanchez.

Pacquiao has fought a middleweight once, Antonio Margarito. He described that fight a “nightmare” for the sheer punishment he received—and he won that bout, which was staged in Dallas 10 years ago.

Last February, Pacquiao’s business manager Jake Joson was telling everyone that the next fight should be a megabuck “retirement fight” against either undefeated Floyd Mayweather or MMA star McGregor. But no deal could be made with either fighter.

Joson and Pacquiao’s other top advisers Arnold Vegafria, Brando Viernesto and Bong Gacal reached out to Paradigm Sports Management, which handles McGregor, to no avail. MP Promotions chief Sean Gibbons could not land a deal, either.

Arum told several news agencies Crawford would be fighting this fall. And while Arum has mentioned several potential opponents, it is Pacquiao he covets the most.

Meanwhile, Thurman has been calling out Pacquiao for a rematch, hoping to avenge a loss to the Filipino in July last year. That was Pacquiao’s last fight thus far.

And as boxing tries to figure a way to continue staging live events amid the pandemic, the 41-year-old superstar hasn’t said anything about when his next fight will be. INQ