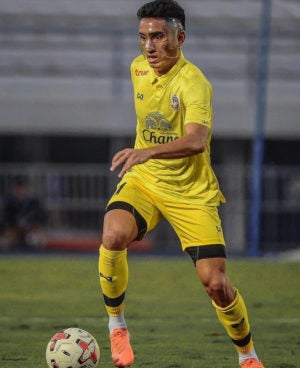 Patrick Reichelt has had to wear protective gear at times. —CONTRIBUTED PHOTO

Toughened by so many battles, Filipino international Patrick Reichelt has quietly put together a stellar playing resume—even with numerous career-threatening injuries.

The physical setbacks have pushed 32-year-old Filipino-German to become one of the more reliable players in the national side and a solid contributor to every club he has represented in the last eight years in Southeast Asia.

Now playing for Suphanburi in the Thai League 1, the right winger feels he’s better than ever—physically and mentally.

“I look back and sometimes I don’t know how I ended up here—still playing,” said Reichelt, who has 61 appearances for the national team, the second among active players in the Azkals behind goalkeeper Neil Etheridge with 65.

Reichelt, who has 10 goals for the Azkals, has not allowed these injuries to define his career, although these have taken away a significant amount of time on the pitch.

The first time he linked up with the Azkals in 2011 in Duren, Germany, Reichelt sustained an ACL tear on the first day of training camp, forcing him to miss the World Cup Qualifiers and the Southeast Asian Games then.

Reichelt’s career took off in 2012 when he packed his bags from Berlin to move to Manila, before it hit another snag when he got hurt again 2016.

“I was out of of the national team for a year and a half and if you think about it, I would have probably played 80 games now if not for these injuries,” Reichelt said.

“It’s mentally difficult. You fall in a big hole. You get depressed. Injuries on football players, they can really catch up on you emotionally. After the first ACL, the second ACL happens, you never know if you are ever getting back to where you were. It’s funny that a year later, I get back and I’m even better than before the injury.”

Reichelt took his fine form in the 2018 AFF Suzuki Cup and later in the AFC Asian Cup in Dubai. He signed with Malaysian side Melaka United last season, emerging as the club’s top scorer, after five trophy-laden years at Ceres-Negros,

He had an option to return for one more season at Melaka, but Reichelt finally agreed to another move to Thailand with Suphanburi.

The Filipino’s stint at the Thai club, where he plays alongside goalkeeper Patrick Deyto, suffered a setback early in the year when he sustained another head injury. For a few matches this year, Reichelt had to play with a protective mask and a helmet.

The stoppage in the Thai League caused by the COVID-19 pandemic has provided Reichelt time to recharge and refocus his energies in helping both club and country to reach goals this year.

“Personally, I am ready to do everything to win the Suzuki Cup or at least be in the final before I retire,” said Reichelt, who was part of Azkals teams that registered three semifinal appearances in the regional tournament.

With the way he has overcome adversities in his career, it would be difficult to bet against the most resilient Azkal player in recent memory.