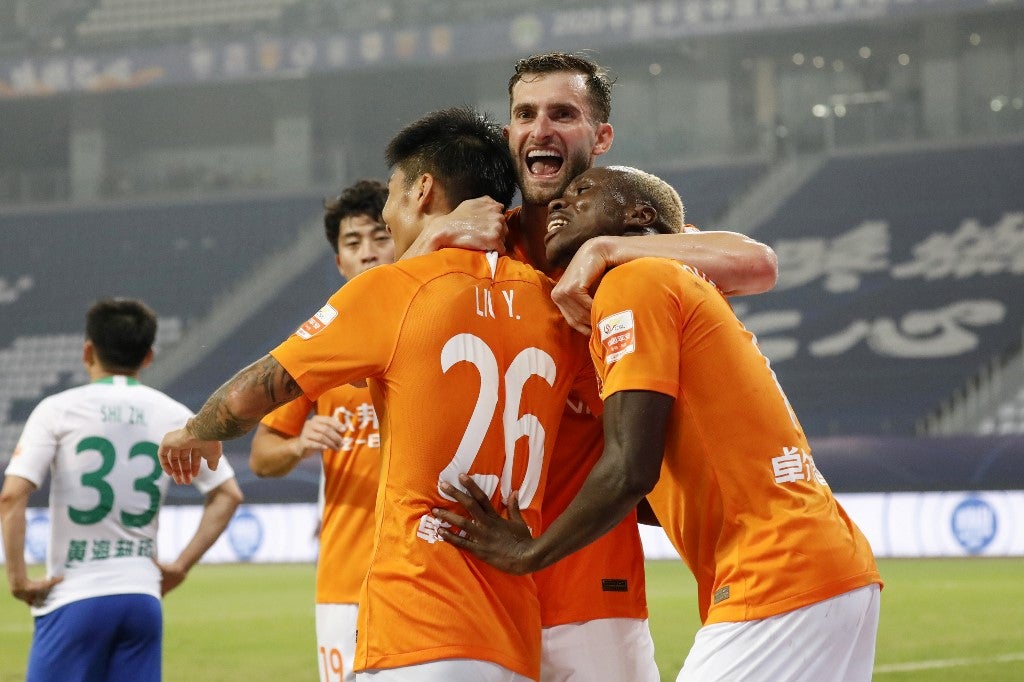 Players of Wuhan Zall celebrate after scored during their Chinese Super League (CSL) football match with Qingdao Huanghai in Suzhou in China’s eastern Jiangsu province on July 25, 2020. – Wuhan Zall players were given a guard of honour and medical staff from the city were applauded as Chinese football made an emotional return on July 25 following a long delay because of coronavirus. (Photo by STR / AFP) / China OUT

Wuhan Zall were given a guard of honor on the way to victory and medical staff from the city were applauded as Chinese football made a poignant return Saturday following a long delay because of coronavirus.

The team from ground zero of the pandemic defeated Qingdao Huanghai 2-0 in an empty stadium in Suzhou, one of two cities hosting matches in a revamped Chinese Super League.

There was a minute’s silence before both of Saturday’s games as the campaign kicked off behind closed doors and five months late.

Qingdao’s players and captains from other teams playing in Suzhou, near Shanghai, lined up and applauded as the Zall squad came onto the pitch.

On a large screen, white writing against a black background said: “Deeply mourn the martyrs and compatriots sacrificed during COVID-19.”

Players and coaching staff of both teams, along with a smattering of others in the stands, then turned to clap a group of white-coated doctors and nurses from Wuhan.

Zall had a troubled pre-season after the central city of 11 million people was placed under a harsh lockdown in January that would drag on for 10 weeks.

During that time Spanish coach Jose Gonzalez’s men were stranded in Spain, then quarantined in southern China and only returned to Wuhan in April after 104 days on the road.

An own goal by defender Yaki Yen and Liu Yun in the second half gave them victory over newly promoted Qingdao, sparking celebrations from Zall fans featured on a big screen who were watching remotely.

“We worked for seven months with one objective, which was that our fans and the city of Wuhan enjoy a victory of their club, at least in the first game,” said Gonzalez afterwards.

“It was a responsibility and my players were conscious that today they had to give a victory, a triumph to our city and our fans,” added the Spaniard, who was appointed in January.

“Today the problems we had were probably forgotten for 90 minutes.”

Zall were purposely chosen to play on the first day of the virus-disrupted season in recognition of the trauma the city and its team faced in recent months.

The number of virus infections has dwindled markedly in China since coronavirus was first reported, in Wuhan late last year, before spreading worldwide.

However, the northeastern port city of Dalian is currently the scene of a small cluster of fresh cases, putting Chinese football officials on edge.

The Chinese Football Association and Super League are taking no risks with the new season, which was supposed to begin on February 22 but became one of the first sporting victims of the health crisis.

The 16 CSL teams have been divided into two groups, in Suzhou and Dalian, and players must spend the first two months living in sealed-off hotels.

The likes of Brazilians Paulinho, Oscar and Hulk, and former Manchester United midfielder Marouane Fellaini, will see only their hotel, training pitches and stadiums.

They are not allowed to meet their families and will be tested for coronavirus once a week.

The 32-year-old Belgian Fellaini is the only known coronavirus case in the CSL and spent three weeks in hospital before his release in April. He was not seriously ill.