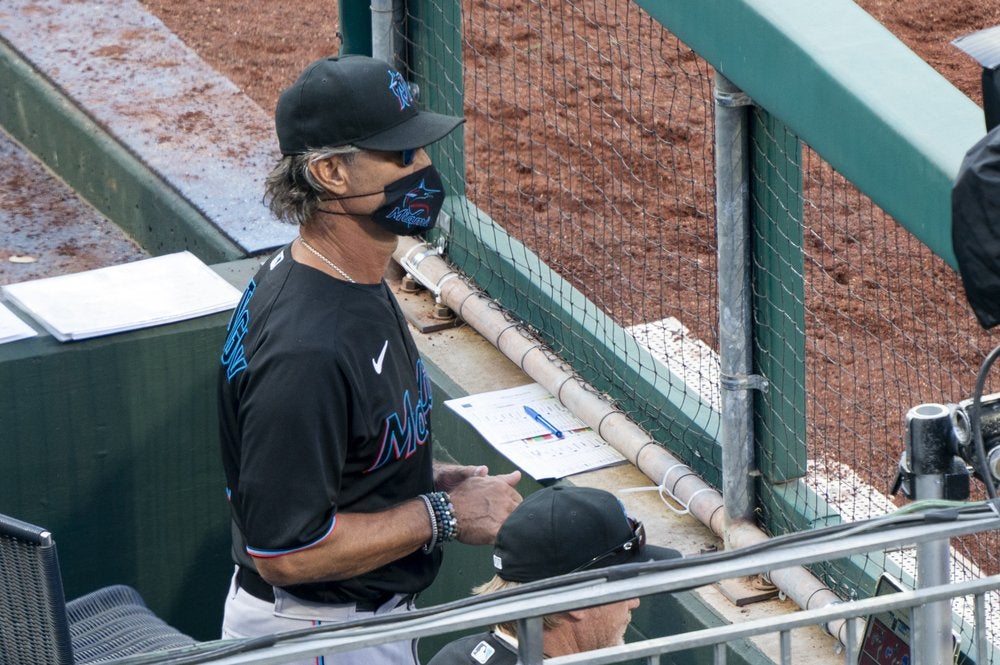 Miami Marlins’ manager Don Mattingly looks out from the dugout during the eighth inning of a baseball game against the Philadelphia Phillies, Saturday, July 25, 2020, in Philadelphia. (AP Photo/Chris Szagola)

MIAMI — The Miami Marlins scratched right-hander Jose Urena from his scheduled start Sunday in Philadelphia and delayed their postgame trip home amid concerns about a possible coronavirus outbreak within the team.

No reason was given for Urena being scratched in the series finale, which Miami won 11-6.

Manager Don Mattingly said the Marlins decided to wait until Monday to leave Philadelphia, and they planned to arrive in Miami hours before their home opener against Baltimore. The trip might be made while multiple players remain in Philadelphia.

“The guys that tested positive are quarantined here in Philly,” Mattingly said. The team made no roster moves after the game.

Miami catcher Jorge Alfaro went on the injured list hours before the season opener Friday at Philadelphia. The Marlins didn’t give a reason but said they expected Alfaro to return this season.

The team’s precarious health raised anew doubts about MLB’s ability to finish the season during a pandemic. In Cincinnati, Reds second baseman Mike Moustakas and center fielder Nick Senzel felt sick Sunday, a day after a teammate went on the injured list because he tested positive for COVID-19.

The Marlins’ decision to postpone their flight home was made with family members in mind.

“We were more comfortable flying as a group later,” Mattingly said. “We’re talking about these guys traveling back home to their families and their kids, and it’s the reason we want to be safe.”

Some Marlins players texted each other about the team’s health issues before Sunday’s game, but there was no talk of declining to play, shortstop Miguel Rojas said.

“That was never our mentality,” Rojas said. “We knew this could happen at some point. We came to the ballpark ready to play.”

Said Mattingly: “It’s fair to say guys are concerned about things. They want how they’re feeling about the situation to be heard. I think it’s fair. We’re talking about health.”

Right-hander Robert Dugger said he learned at 8:30 a.m. that he would filling in for Urena. Dugger said the Marlins are braced for the uncertainty that comes with trying to hold a season during a pandemic.

“There’s nothing we can really do,” he said. “It’s out of our control. We just do the best we can with the masks and social distancing and all that, and hope for the best.”

The Marlins played exhibition games at Atlanta on Tuesday and Wednesday against the Braves, who have since been without their top two catchers, Tyler Flowers and Travis d’Arnaud, after both players showed symptoms of the coronavirus.

Mattingly declined to say whether he thought the Marlins’ health issues were related to the Atlanta stop. But he said he’ll be happy to return to Miami, even though it’s a hot spot for the pandemic.

“It feels safer in Miami than anywhere,” Mattingly said. “You feel safe at the ballpark; I feel safe with my surroundings going home. It’s a lot scarier on the road.”