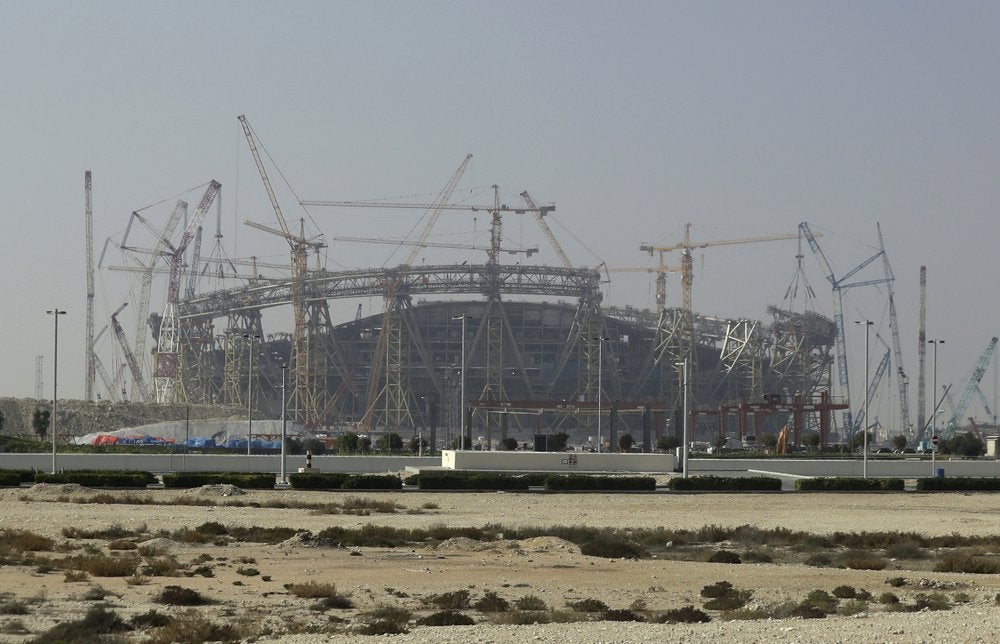 FILE – In this file photo dated Friday, Dec. 20, 2019, construction underway at the Lusail Stadium, one of the 2022 World Cup stadiums, in Lusail, Qatar. The gas-rich Persian Gulf nation Monday July 27, 2020, Qatar has expressed an interest in hosting the world’s biggest sporting events, the 2032 Olympic and Paralympic Games, in a letter to the International Olympic Committee.(AP Photo/Hassan Ammar, FILE)

Qatar is keen on hosting the 2032 Olympic and Paralympic Games.

The gas-rich Persian Gulf nation has expressed an interest in hosting the world’s biggest sporting events in a letter to the International Olympic Committee.

Qatar is turning its focus to bringing the Summer Games to the Middle East for the first time as it prepares to host the region’s first World Cup in 2022.

“Today’s announcement marks the beginning of a meaningful dialogue with the IOC’s Future Host Commission to explore our interest further and identify how the Olympic Games can support Qatar’s long-term development goals,” Sheikh Joaan bin Hamad bin Khalifa Al-Thani, president of the Qatar Olympic Committee, said in a statement.

“For many years, sport has been a major contributor to our nation’s development. … It is this proven track-record and wealth of experience, along with our desire to use sport to promote peace and cultural exchange, that will form the basis of our discussions with the commission.”

An interest in bidding for the Olympics comes as Qatar continues to face corruption allegations over how it won the rights to host the World Cup in a FIFA vote in December 2010.

An earlier FIFA investigation found some of Qatar’s conduct “may not have met the standards” required by FIFA but concluded there was no “evidence of any improper activity by the bid team.” Qatar has denied any wrongdoing.

FIFA had to move the World Cup from its usual June-July slot to November-December 2022 due to the desert country’s fierce summer heat.

While the Summer Olympics is typically held in July and August, Qatar did stage the world track and field championships last year across September and October at an outdoor stadium using air conditioning.

The next Summer Olympics are the rescheduled Tokyo Games in 2021, followed by Paris in 2024 and Los Angeles in 2028.