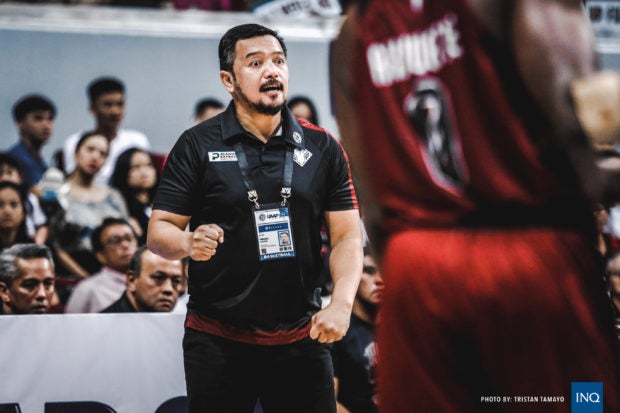 University of the Philippines (UP) head coach Bo Perasol—now that he has a lot of materials to work with—wants to buckle down to work and make the Maroons as competitive as he can starting with the next UAAP season and for the years to follow.

“It’s always better for me to be on the side of preparedness. I won’t wait for the UAAP’s next move until I get onto planning,” he told the Inquirer on Sunday on the heels of what seemed as a successful recruiting frenzy by last season’s second seed.

The task now for UP is to get back to the Final Four and to the Finals, and Perasol is hoping to do that with a squad that will come into battle armed to the teeth for the years to come.

UP announced on Saturday that it has secured the commitments of National University-Nazareth school aces Carl Tamayo and Gerry Abadiano, talents with national team experience having suited up for the Philippine squad in the U-19 World Cup in Greece.

The pair’s arrival hikes the Maroons’ pool of players—and level of talent—at a time when it suffered multiple departures to graduation and brothers Juan and Javi Gomez de Liaño’s decision to sit out the next season.

Tamayo and Abadiano join RC Calimag and Miguel Tan, who both served the U-17 team, along with Fil-foreign prospects Sam Dowd, Alonso Tan, Anton Eusebio, and towering project Ethan Kirkness as the new arrivals.

“The fact is we could have had one or two players left for next season. We were depleted,” Perasol said. Perasol, however, pointed out that these young talents—though packed with potential—still have to prove themselves and earn their spots in the team.

Kobe Paras, Ricci Rivero and Bright Akhuetie, UP’s vital cogs in its campaign last year, will reprise their roles when the next UAAP season comes along. But Perasol isn’t leaving anything to chance, which is why he is putting premium on ensuring that the program goes on without hiccups for as long as possible.

“We want to ensure that we’re always competitive. That we won’t suffer just because certain people or group leaves,” he said. “The job of a college coach is [to ensure] sustainability. It means you always have to check your personnel pipeline—who’s coming in, who’s going out, who’s graduating in two years.”

“It requires the responsibility of always thinking ahead,” he added.

“The problem with UP’s program way back was that it had no continuity. Every time there’s a takeover [in coaching], players come in, some sit out. The program does not progress because it suffers delays and stoppages brought by [these changes].” INQ

TAGS: Bo Perasol, Sports, University of the Philippines (UP)