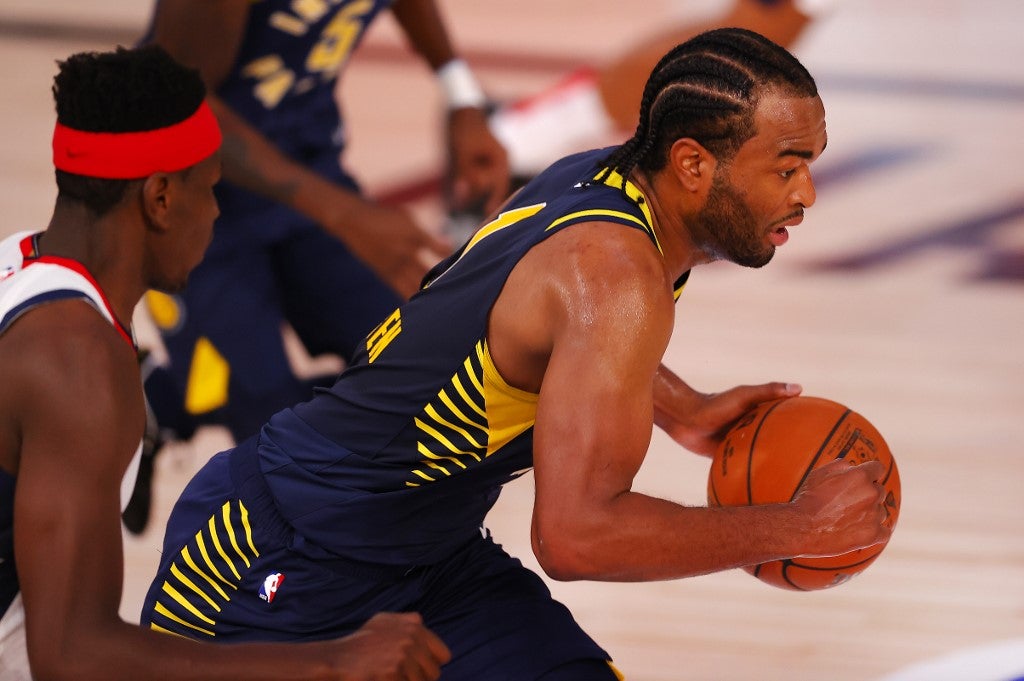 T.J. Warren #1 of the Indiana Pacers drives the ball down the court against the Washington Wizards at Visa Athletic Center at ESPN Wide World Of Sports Complex on August 03, 2020 in Lake Buena Vista, Florida. Mike Ehrmann/Getty Images/AFP

LAKE BUENA VISTA, Florida — T.J. Warren kept up his red-hot restart with 34 more points, helping the Indiana Pacers pull away from the Washington Wizards for a 111-100 victory Monday.

Two nights after scoring a career-best 53 points in the Pacers’ first game at Disney, Warren had 16 points in the third quarter to spark a 22-2 run after Washington had fought back into the game.

Warren shot 14 for 26 from the field and grabbed 11 rebounds for the Pacers, who improved to 2-0 since resuming the season. They played without star guard Victor Oladipo, who rested on the first night of back-to-back games.

Indiana pulled within a game of Miami for fourth place in the Eastern Conference.

“Everybody’s stepping up, so everybody’s just trying to take turns and give it all they got when they’re out there,” Warren said. “So, it’s been working so far.”

Malcolm Brogdon had 20 points, seven rebounds and six assists in his Disney debut, and Myles Turner and Aaron Holiday each added 17 points.

“We had a lapse in the third quarter but we were able to finish the game,” Brogdon said.

Thomas Bryant had 20 points and 11 rebounds for the Wizards, who fell to 0-3 at Disney and likely won’t be sticking around terribly long. They dropped to 7 1/2 games behind eighth-place Brooklyn and need to be within four games to force a play-in for the final Eastern Conference playoff spot.

The Wizards recovered and trailed just 68-66 after Bryant’s 3-pointer with 5:25 remaining in the third quarter. But Turner had a dunk before Warren scored the next eight points, converting a pair of three-point plays, to kick off the second big run and Washington couldn’t bounce back from that one.

“I just like the effort. I like just the fight,” Wizards coach Scott Brooks said. “We were down. We were playing hard in the first half. They went on that 18-2 or 20-2 run and we tried everything. Couldn’t get anything to go for us and they didn’t give up. They cut it to seven late in the game but it’s a great group to coach.”

Oladipo initially planned to opt out of the restart but joined his teammates in Florida eventually and scored 15 points and played 32 minutes in the 76ers game. He had played just 13 games before the shutdown as he recovers from a ruptured quad tendon.

Pacers: Coach Nate McMillan celebrated his 56th birthday. … Turner grabbed nine rebounds. … The Pacers won the other meeting this season, all the way back in November.

Wizards: The Wizards shuffled their lineup by having Ish Smith take over for Shabazz Napier as the starting point guard. Napier had shot 8 of 22 and had totaled eight turnovers and five assists during the first two games of the restart. Napier scored 16 points and Smith had 12.

McMillan said the Pacers are being cautious with Brogdon, whose return to action was slowed by his positive COVID-19 test earlier this summer. “No restrictions have been put on him, but we have to know that he hasn’t practiced a lot,” McMillan said before the game. “He’s been off the last couple days, so we certainly will be watching all of our guys. All these guys are going in pretty much with the same kind of condition in the sense that this is a restart. We know guys are not in basketball shape right now. They have to play themselves into that conditioning.”