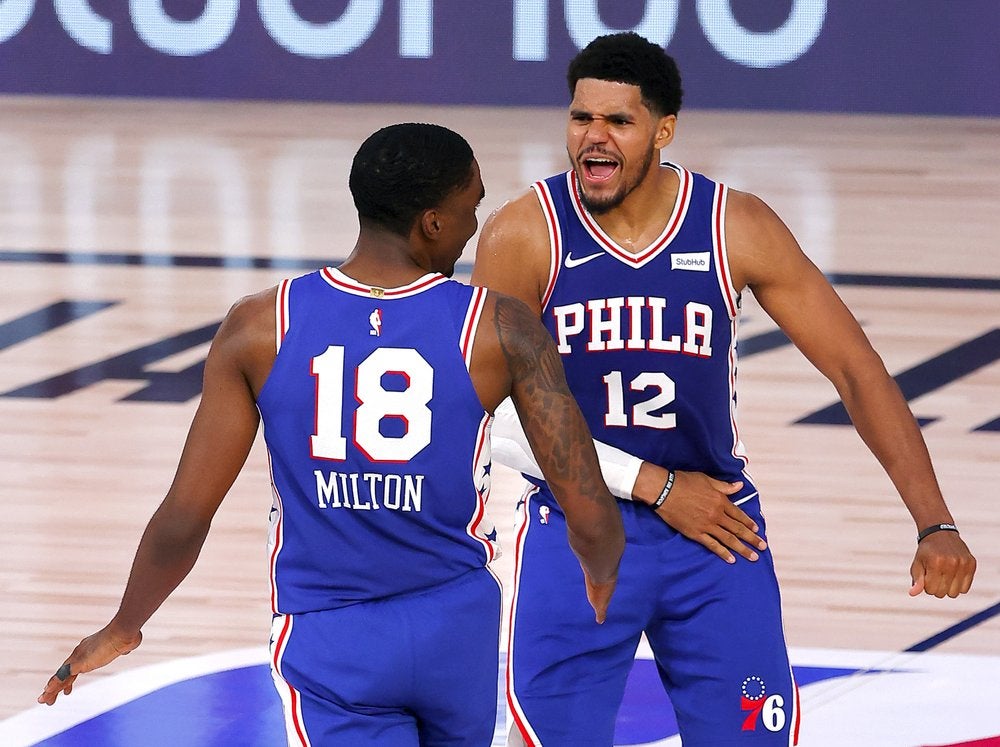 Philadelphia 76ers Shake Milton (18) is congratulated by his teammate, Tobias Harris (12), after scoring a three point basket against the San Antonio Spurs during the second half of an NBA basketball game Monday, Aug. 3, 2020, in Lake Buena Vista, Fla. (Mike Ehrmann/Pool Photo via AP)

Joel Embiid, who had 27 points and nine rebounds for the 76ers, drew San Antonio’s defense and helped Milton get a good look.

“We figured they were going to go down to Embiid,” San Antonio’s DeMar DeRozan said. “I think we were more conscious of trying to help whoever was guarding Embiid instead of just trying to stay home and not give up a 3. The young kid took a big shot. I give him credit. He hit it.”

Milton went scoreless on Saturday against Indiana and entered the night averaging 9.2 points. He finished with 16 points on Monday.

“He’s been working really hard this season,” Embiid said. “He’s been showing up. That was a big shot he hit. He gave us the win. I’m extremely happy for him.”

The 76ers opened a 14-point lead early in the fourth quarter, then recovered after falling behind by four in the final minute.

Embiid, who was coming off a 41-point, 21-rebound performance in a loss to Indiana on Saturday, followed that effort by shooting 9 for 17 as Philadelphia evened its record in the restart.

Tobias Harris scored 25 points and Josh Richardson had 19 for the 76ers.

DeRozan scored 13 of his 30 points in the fourth quarter for San Antonio. Rudy Gay scored a season-high 24 points and Derrick White added 20.

San Antonio fell to 2-1 in Florida and missed a chance to gain ground in the Western Conference standings. The Spurs remained 1 1/2 games behind eighth-place Memphis.

San Antonio could have become the first team to win three games in the restart.

The 76ers inbounded trailing by two with 10 seconds left and left Milton plenty of room to shoot while trying to keep the ball from getting into Embiid.

Dejounte Murray, who was assigned to Milton on the play, accepted responsibility for Milton getting open.

“The inbound, he (Spurs coach Gregg Popovich) wanted me to be in, faceguard Embiid, but also me get back right away,” Murray said. “That was just a mistake on my end, not getting back right away when the ball was inbounded.”

San Antonio’s Jakob Poeltl then missed a contested layup in close, and the ball went out of bounds off the Spurs. Embiid made the first of two free throws to close the scoring.

“Everybody’s sick in the stomach,” Murray said. “We fought so hard, and we had that game in our hands.”

Spurs: G Marco Belinelli sat out with a sprained left foot. He was injured during the San Antonio’s first restart game against the Sacramento Kings … G Bryn Forbes sat out with tightness in his right quad.

76ers: Glenn Robinson III was out with a left hip pointer and Mike Scott sat out with soreness in his right knee. Both also missed Saturday’s game against Indiana. … Ben Simmons fouled out in the fourth quarter with eight points and five assists in 25 minutes. … Embiid had one rebound in the first half.

Embiid scored on a putback at the end of the third quarter on a play that appeared to come after the shot clock expired. He tapped an airball off the rim, rebounded it and scored with a second remaining.

“I thought it was a very strange circumstance.” Popovich said.

Spurs rookie Keldon Johnson scored a season-high 15 points. He made 6 of 7 free throws.

“He’s a monster competitor,” Popovich said. “Learning more every day. He’s getting confidence in his shooting and he drives it well. He hits the board and playing hard on D. He’s a fine young player.”

The 76ers allowed 46 points in the fourth quarter against Indiana on Saturday and 43 in the fourth against San Antonio on Monday.

“I think it stinks,” 76ers coach Brett Brown said. “I don’t think that it’s anything that we are or believe in or talk about. We were very lucky to win tonight.”