No standing, no beer: German football aims to bring fans back 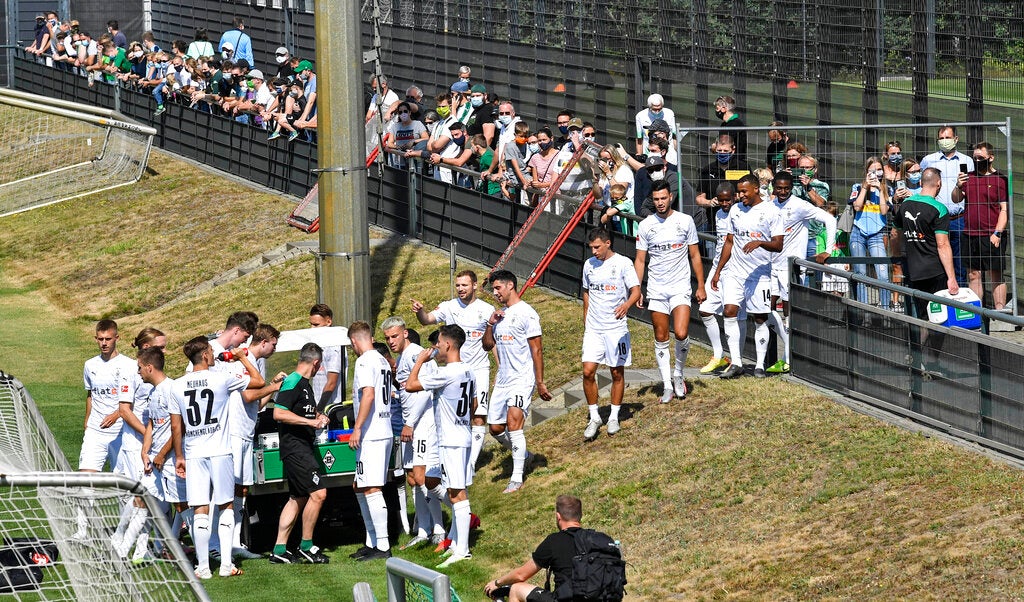 Borussia’s team walks in front of their fans during the first training session of German Bundesliga club Borussia Moenchangladbach at the training ground in Moenchengladbach , Germany, Tuesday, Aug. 4, 2020. For the first time since the coronavirus outbreak, 300 supporters with face masks, online tickets and social distance were allowed to watch their team. (AP Photo/Martin Meissner)

German football is hoping to get fans back into the stadiums next month. It won’t look anything like a typical Bundesliga season.

Fans won’t be allowed to drink beer or stand on terraces such as Borussia Dortmund’s renowned “Yellow Wall,” at least to begin with, and it will be home fans only until the end of year.

The 36 clubs in Germany’s top two men’s divisions held a virtual meeting on Tuesday to define a broad outline for the leagues. The exact number of fans allowed could vary by club.

The tentative return depends on how the coronavirus spreads in Germany, and requires approval from a mosaic of regional and local authorities. Local health officials in Leipzig have backed plans for fans to return there, but the governor of Bavaria — home to champion Bayern Munich — has been more cautious.

Clubs agreed to prohibit away fans in the hope of reducing the number of people traveling across the country to games. Standing sections are a key part of Germany’s loud and colorful fan culture, but the thinking is that it’s easier to enforce social distancing between seated fans.

There are also plans to keep more personal data on fans with a personalized online ticket system to help contact tracing.

The new season begins in Germany with first-round cup games from Sept. 11. UEFA is staging the final rounds of the Europa League in Germany this month but all games are without spectators.