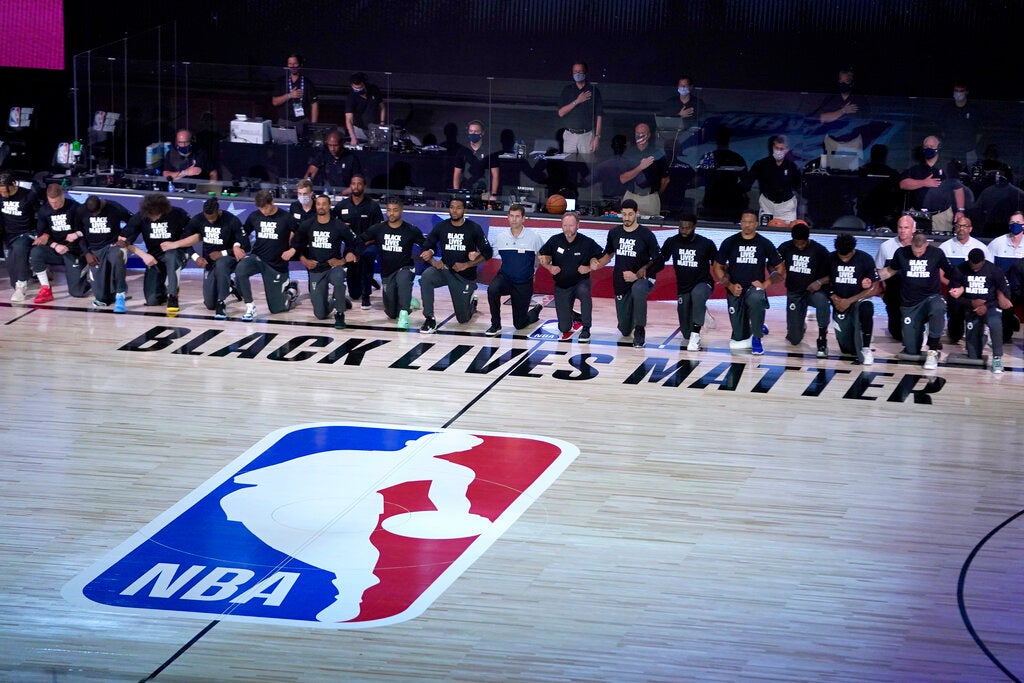 Members of the Milwaukee Bucks and the Boston Celtics kneel around a Black Lives Matter logo before the start of an NBA basketball game Friday, July 31, 2020, in Lake Buena Vista, Fla. (AP Photo/Ashley Landis, Pool)

NBA eam owners will contribute a total of $300 million over the next 10 years to a charitable foundation aimed at accelerating economic growth in the Black community, the league said on Wednesday.

Each of the NBA’s 30 teams will provide $1 million annually during that time to fund the NBA Foundation, which is being launched by the league’s board of governors and the players’ union.

“The creation of this foundation is an important step in developing more opportunities for the Black community,” said National Basketball Players Association (NBPA) President Chris Paul.

“I am proud of our league and our players for their commitment to this long-term fight for equality and justice, and I know we will continue to find ways to keep pushing for meaningful institutional change,” Paul said.

The foundation aims to drive economic empowerment for Black communities through employment and career advancement, increasing access and support for high school, college-age and career-ready Black men and women.

It will also work toward deepening the NBA’s commitment to racial equality and social justice, movements that have gathered momentum after the death of George Floyd, an unarmed Black man killed in police custody in May.

Anti-racism protests have been at the forefront of the NBA’s restart at the Walt Disney World Resort near Orlando, with games being played on courts that have “Black Lives Matter” painted on them and players wearing jerseys with social-justice messages.

“We are dedicated to using the collective resources of the 30 teams, the players and the league to drive meaningful economic opportunities for Black Americans,” said NBA Commissioner Adam Silver.

“We believe that through focused programs in our team markets and nationally… we can advance our shared goals of creating substantial economic mobility within the Black community.”