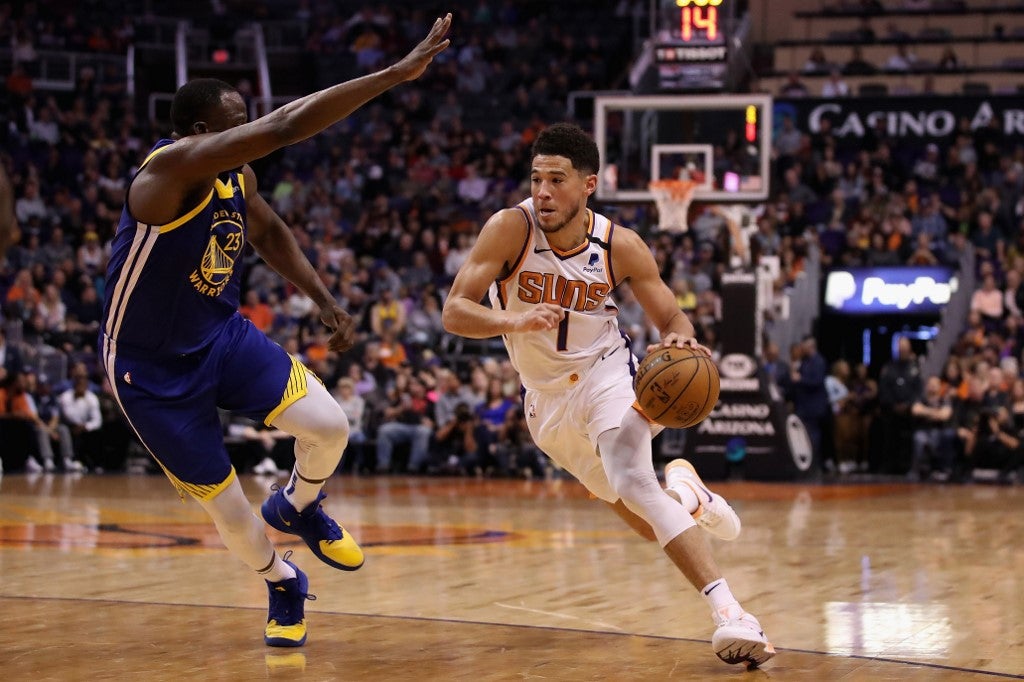 FILE – Devin Booker #1 of the Phoenix Suns drives the ball past Draymond Green #23 of the Golden State Warriors during the second half of the NBA game at Talking Stick Resort Arena on February 12, 2020 in Phoenix, Arizona. The Suns defeated the Warriors 112-106. Christian Petersen/Getty Images/AFP

Appearing on TNT’s Inside the NBA, Green isn’t for Booker staying in Phoenix, which has been on a resurgence since the NBA restart.

“It’s great to see Book playing well and Phoenix playing well, but get my man out of Phoenix,” said Green, who guested on the show with hosts Charles Barkley, Ernie Johnson and Kenny Smith.

When he was asked by Johnson if he was tampering, Green replied “Maybe.”

But Booker leaving Phoenix isn’t likely to happen anytime soon with the All-Star reportedly just about to wrap up the first season of a five-year max contract extension he signed with the Suns in 2018.

The Suns trading him to the Warriors is also deemed highly unlikely as well.

Regardless, Green could face a hefty fine from NBA commissioner Adam Silver, who has been very strict about tampering.

Read Next
Tiger Woods makes cut but ‘struggles’ on greens at PGA Championship
EDITORS' PICK
Smart poised to turn PH into ‘Smart 5G country’ with nationwide rollout
Water remains our saving grace right now
Palace blasts Facebook ‘censorship:’ Why only take down pro-gov’t pages?
Lakers, Heat start their preparations for NBA Finals
Get 80% OFF Ignite 2020 Cyber Tickets starting 28 September
‘Psychic numbing:’ When people stop giving a damn about the pandemic
MOST READ
‘I offered to resign’ because of endless corruption, says Duterte
Duterte tells Facebook: Why keep operating in PH if you can’t help us?
Duterte keeps Metro Manila under GCQ for entire October
Cayetano, Velasco to be flanked by supporters during Duterte meet
Don't miss out on the latest news and information.

Cayetano, Velasco to be flanked by supporters during Duterte meet

Palace blasts Facebook ‘censorship’: Why only take down pro-gov’t pages?