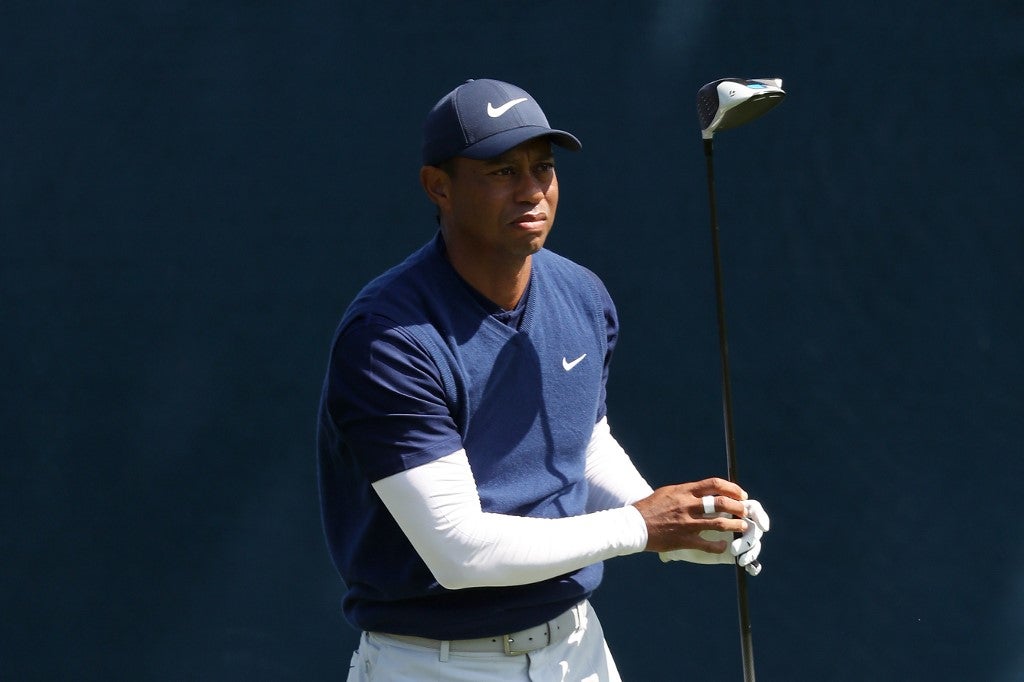 Tiger Woods of the United States watches his shot from the fifth tee during the third round of the 2020 PGA Championship at TPC Harding Park on August 08, 2020 in San Francisco, California. Jamie Squire/Getty Images/AFP

An out of sorts Tiger Woods struggled on the greens for the second straight day as his PGA Championship hopes evaporated on Sunday.

Woods, who barely made the cut on Friday afternoon, shot a two-over 72 for the second straight round at the TPC Harding Park in San Francisco.

It means the 44-year-old’s hopes of a 16th major title are all but extinguished.

“I am frustrated I didn’t get anything going early,” said Woods, who finished three rounds at two-over 212. “I got a couple of bad angles and miss shots in spots I can’t play from and I made bogeys.

“I am happy with the way I finished. It was just a fight all day and I didn’t get anything going.”

Woods is 10 strokes back of second round leader Li Haotong with a host of former major champions near the top of the leaderboard, including two-time defending champion Brooks Koepka.

Woods hopes to rebound Sunday with a solid round to take some momentum into a very busy stage of the PGA Tour season.

“I still have the last round of a major to play. Hopefully tomorrow I will shoot something in red and get it to under par for the tournament,” he said.

Woods had four bogeys on Saturday, including one stretch of three straight on the back nine, beginning at the par-three 11.

That came after he made par on No. 10, a hole he had birdied the first two days.

Woods salvaged some pride by making birdie on two of his final three holes, closing his round with a five-foot birdie putt on No. 18.

But his first birdie of the day didn’t come until the 16th hole when he drained a 14 footer to get to three over for the tournament.

Wood’s best shot of the day was his approach on 18. He hammered an iron shot 209 yards from the fairway to just five feet of the flag stick to set up the birdie.

Heading into Saturday’s round, Woods needed to vault past 42 other golfers to get to the top of the leaderboard at an event he has won four times previously.

Woods said there is much more parity among the top players on the Tour than when he went through his dominating run.

“It is getting tighter and harder to win events,” he said. “When I look at leaderboard I see the same handful of guys.

“They understand how to win the majors and how to plod along.

“The guys who understand how to play tough golf courses will be up there, crowds or no crowds.”

The Harding Park tournament is being played without spectators due to the coronavirus restrictions.

Woods, who usually plays in front of packed galleries cheering him on, isn’t using the lack of crowds as an excuse.

“Saturday of a major is usually pretty rowdy,” he said. “This is our new norm. We have to get used to it.”