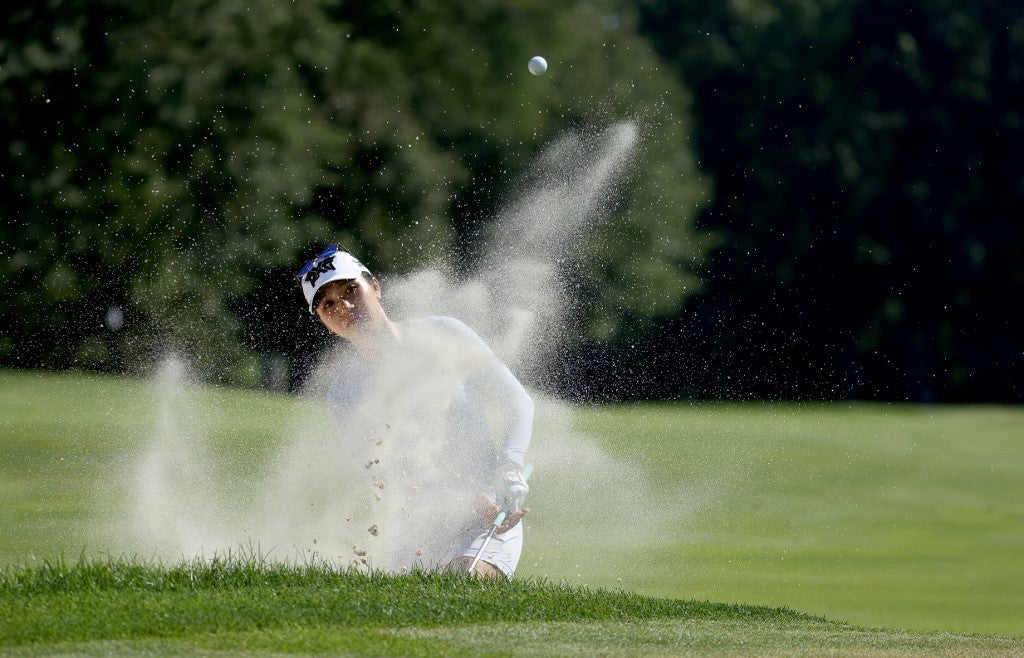 Lydia Ko of New Zealand hits a shot from the sand on the seventh hole during the third round of the Marathon LPGA Classic at Highland Meadows Golf Club on August 08, 2020 in Sylvania, Ohio. Gregory Shamus/Getty Images/AFP

A late flurry of birdies left Lydia Ko in pole position at the LPGA Marathon Classic on Sunday as the former world number No. 1 surged into a four-shot lead heading into the final round.

The 23-year-old New Zealand star rattled off two birdies in her final three holes to card a three-under-par 68 and move to 16-under at Highland Meadows in Sylvania, Ohio.

It was the second straight day that Ko finished strongly. On Friday, Ko had birdied the 17th and 18th holes to move into a one-stroke second round lead with a six-under-par 65.

Ko later revealed that she had been bothered by a sore back during her round.

“It started hurting a little bit,” Ko said. “I think the key for me tomorrow is even if it doesn’t feel 100%, just to go out there and hit it confidently and aggressively.

“Even though the pain is there I feel like when I hit it hard, my body is not flinching over that area. I just have to not worry about it.”

After a day of low scoring in the second round, the field found the going tougher on Saturday with pin positions making for a more challenging set-up.

After two birdies and a bogey in her first six holes, Ko went on a run of nine consecutive pars before she began to pull away down the stretch with her late birdies.

That left her four clear of Danielle Kang, who battled to a one-under-par 70 after a round that included three birdies and two bogeys.

Kang was unhappy with her failure to make the most of several birdie chances that presented themselves during her round.

“Frustrating, annoying and irritating,” Kang said when asked to summarize her display. “It’s only Saturday and we have a lot of golf left out there. But I was getting frustrated today. I couldn’t get the ball in the hole.

“I missed three putts from five feet. It’s very frustrating when you miss those and other birdie opportunities, it doesn’t give you a good momentum for the following holes.”

Kang is 12 under after 54 holes, two shots ahead of Australia’s Minjee Lee and England’s Jodi Ewart Shadoff, who are 10 under.

Lee put herself in contention with a brilliant eagle three on the par-five 18th, chipping in from a bunker to complete a three-under-par 68.

But Shadoff, who electrified the field on Friday with an eight-under-par 63, was 10 shots worse in the third round, firing a two-over-par 73.

Lindsey Weaver is a shot back on nine under after a four-under-par 67 while Maria Fernanda Torres is sixth on eight under.