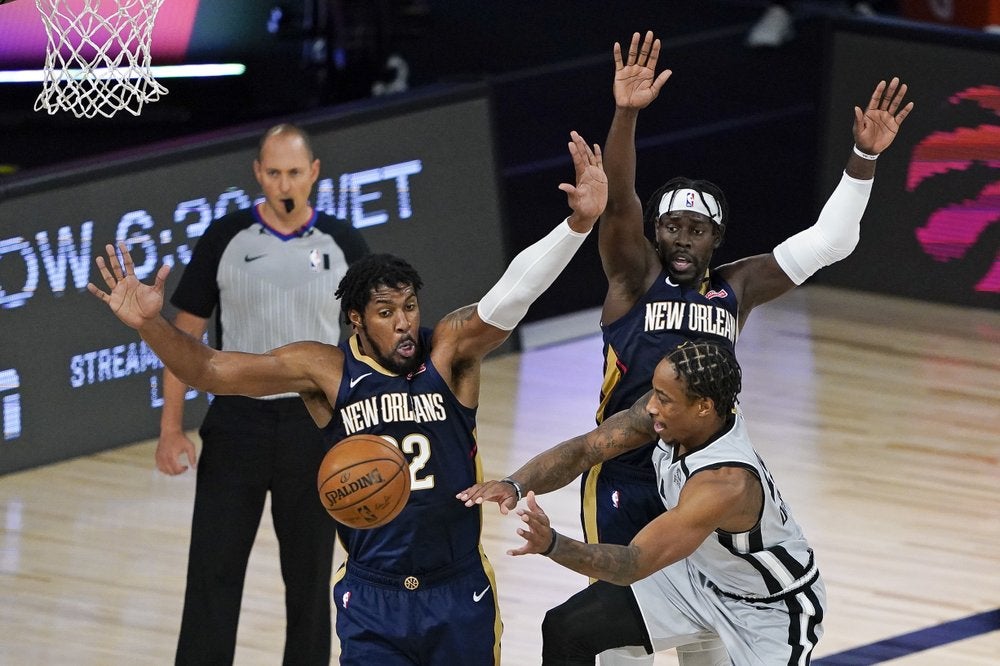 For Zion Williamson, postseason hopes have to wait until next year.

DeMar DeRozan scored 27 points, Rudy Gay added 19 off the bench and the Spurs wasted much of a 20-point, second-half lead before hanging on to beat New Orleans 122-113 on Sunday. The loss, combined with Portland’s win over Philadelphia later Sunday, eliminated New Orleans from playoff contention.

“We’ve just got to put ourselves in a better position to win,” Williamson said.

The Spurs — bidding to become the first team in NBA history to make 23 consecutive playoff appearances — moved past idle Phoenix into 10th place in the West, a half-game behind Portland for the No. 9 spot that comes with a berth in the play-in series this coming weekend.

“I think it’d be huge,” said Popovich, the Spurs’ coach. “If we’re able to be in that ninth spot, that’s quite a victory and it says a lot about how this young group has come together with three of the starters out. I’m already thrilled with how they played, and it’d be really fantastic if we could get that.”

Dejounte Murray scored 18 for the Spurs. Derrick White added 16 before leaving early in the third quarter with a bruised knee.

JJ Redick scored 31 points with a season-high eight 3-pointers for New Orleans, which got 25 from Williamson and 17 from Brandon Ingram.

“We just didn’t have any competitive spirit to start the game,” said Redick, who will miss the playoffs for the first time in his basketball life — spanning high school, college and the NBA levels. “We were flat. We weren’t talking. That’s what it comes down to.”

Pelicans coach Alvin Gentry called it a Game 7-type game beforehand but stayed with the plan of playing Williamson in short bursts. Williamson started the first, second and third quarters, coming out around the midway point of each.

In the fourth, Gentry took Williamson out with 6:53 left, putting him back in for the last-ditch try about two minutes later. But the Pelicans never got the lead back, and now have only two games left in the No. 1 pick’s season. It’s unknown if Williamson will play in those games.

“We played 44 games without Zion so it’s really kind of hard to put a stamp on exactly what the season is,” Gentry said. “But I like the young players that we have. I think going forward we’re going to have an opportunity to be a good team and compete at a real high level.”

The Spurs led 69-49 with 9:54 left in the third quarter, a key moment — because that was when White left with the knee problem.

And the game changed in an instant.

Williamson scored the next eight points by himself, kick-starting what became a 28-12 run by the Pelicans to end the quarter.

A dunk by Jaxson Hayes got New Orleans within 10. Nickeil Alexander-Walker — who hadn’t made a shot in the Pelicans’ last 15 quarters and had only two 3-pointers since mid-January — connected from beyond the arc late in the third, and New Orleans was suddenly within 81-77 going into the fourth.

Redick got into the lane for a three-point play with 3:21 left, getting the Pelicans within 103-100. DeRozan scored inside on the next San Antonio possession, and a late 8-0 spurt by the Spurs sealed the deal.

“We’re not there yet,” Popovich said. “But we’ve made a lot progress, for sure.”

Spurs: Popovich revealed that assistant Tim Duncan, who the team said stayed behind instead of coming to Disney to help with the rehabilitation of injured forward LaMarcus Aldridge, wanted to be on the trip. “He would like to be here, but it didn’t make much sense to me to put him through that,” Popovich said. “So, he’s coaching from home.”

Pelicans: Redick took two charges in a 47-second span during the third quarter, part of the Pelicans’ big run to end that period. … Lonzo Ball had 10 assists.

Popovich, without being asked, spent about three minutes before the game reflecting on Sunday being the sixth anniversary of the death of Michael Brown — an unarmed 18-year-old Black man, shot to death by a police officer following an altercation in Ferguson, Missouri. Raising awareness on the ongoing problem of racial injustice and police brutality has been a top season-restart priority for NBA players and coaches, and Popovich has spoken on the matter several times.

Pelicans owner Gayle Benson sent the team provisions for a special Saturday night dinner — “what we call New Orleans Food,” Gentry said. On the menu: Everything from gumbo to “some of the greatest cake you could ever taste,” Gentry said.