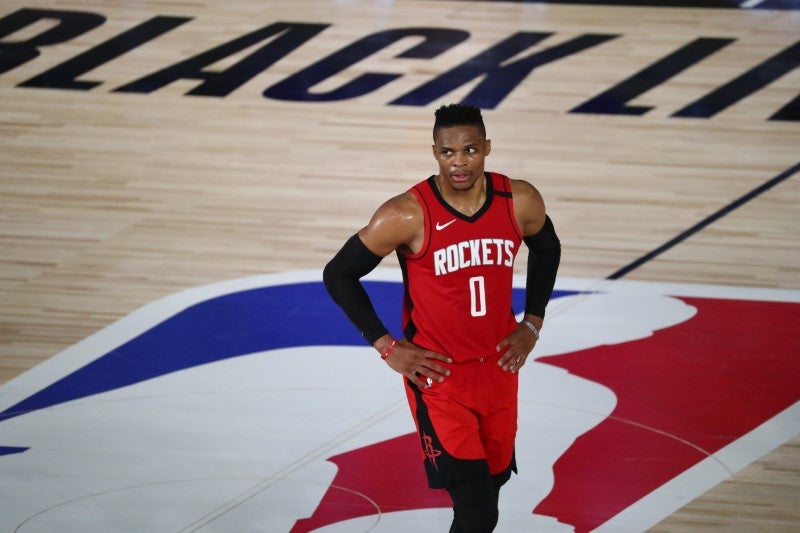 FILE PHOTO: Houston Rockets guard Russell Westbrook (0) looks on from center court during the first half of a NBA basketball game against the San Antonio Spurs at The Field House. Kim Klement-USA TODAY Sports

Houston Rockets guard Russell Westbrook will miss the start of next week’s playoff series against the Oklahoma City Thunder due to a strained right quadriceps muscle, the Houston Chronicle first reported Thursday.

The report, citing a “person with knowledge of the team’s thinking,” said the nine-time All-Star will be out for the first few games and possibly longer. ESPN also confirmed the report.

Westbrook, 31, was already ruled out of Friday’s regular-season finale against the Philadelphia 76ers after an MRI confirmed the injury.

The team said he will be re-evaluated before the playoffs start near Orlando. The Rockets and Thunder are tied at 44-27 entering Thursday. The teams are locked into the No. 4 vs. No. 5 matchup in the Western Conference, with only the seeding to be determined.

Westbrook played his first 11 seasons with Oklahoma City before being traded to Houston on July 16, 2019, in a blockbuster deal that sent fellow All-Star Chris Paul to the Thunder.

Westbrook was late to join the NBA’s restart after he tested positive for COVID-19. He first felt soreness in his right quad Aug. 4 after a game against the Portland Trail Blazers, sitting out the next two games as a precaution.

He has played four games during the restart, scoring 24.3 points with 6.3 rebounds and 7.8 assists. The 12-year veteran, who is in his first season with the Rockets, has averaged 27.2 points this season with 7.9 rebounds and 7.0 assists.