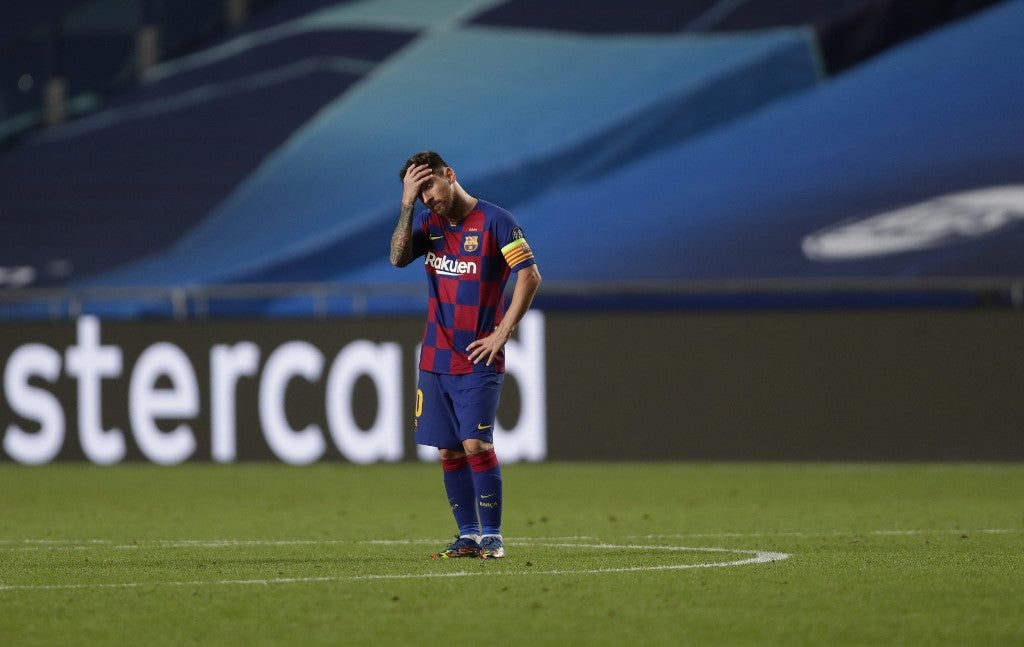 LISBON, Portugal — The postmortem from Gerard Piqué was as brutal as the humiliation dished to Barcelona by Bayern Munich.

“It’s a disastrous result,” the defender said. “An embarrassment, that’s the word.”

Another number? 74. It’s that many years since Barcelona conceded as many goals in a game.

“We have hit rock bottom,” Piqué said in a television interview on the field after Friday’s loss dumped the five-time winners out of the Champions League in the quarterfinals.

Unlike the capitulations in the previous two seasons — against Roma and Liverpool — there was no first-leg lead to throw away.

Not even Lionel Messi could save Barcelona at the end of a season in which he has seemed increasingly agitated by the disarray.

This was a night of utter misery in Lisbon in the pandemic-enforced single-game reformatting of a knockout stage that has never a seen a team lose so heavily in the Champions League era. If it wasn’t embarrassing enough, Barcelona had to watch Philippe Coutinho inflict the final blows and make the collapse all the more painful.

The German champions were already cruising into the semifinals with a 5-2 lead when Coutinho was sent on for the final 15 minutes.

The Brazilian found time for an assist — pinging the ball to the head of the unmarked Robert Lewandowski — and then to score twice himself against a goalkeeper he knows so well.

Marc-André ter Stegen is still Coutinho’s teammate. The 160 million euros forward remains not only Barca’s record signing but still their player. He’s only on loan at Bayern for this season after struggling to settle at the parent club he joined from Liverpool in 2018 as the supposed heir to Andrés Iniesta.

He never even had a chance to work under Quique Setién, who was hired in January to replace Ernesto Valverde.

It’s hard to see Setién getting a full season in charge now after Barcelona finished a campaign trophyless for the first time since 2008 — right before Pep Guardiola took charge and ushered in an era of dominance. But Barca hasn’t won the Champions League since Luis Enrique swept five trophies in 2015.

“We need new blood,” Piqué said, without discussing specifics. “There need to be changes at all levels.”

Setién knows Piqué’s assessment will resonate across the club.

“I’ve been here for just a few months,” he said. “If Gerard says that it’s time for big changes there’s going to be importance to his words. It’s time for us to review and take the decisions which are needed for the future.”

A future that probably won’t include Setién after accepting his “credibility” had been further diminished.

“Some decisions were already taken, and others will be taken as a result of this,” Barcelona president Josep Bartomeu said. “From next week they’ll be worked through. Right now isn’t the time to make knee-jerk decisions, it’s time to think.”

The players accept culpability at the end of a season when they finished second in La Liga behind Real Madrid and only reached the quarterfinals of the Copa del Rey.

One comfort for Barcelona is that Madrid can’t add to its record 13 European Cups. For the first time since 2007, neither Barcelona nor Madrid reached the semifinals.

“Today showed that we have a lot of problems in the team,” Barcelona midfielder midfielder Frenkie de Jong said. “We know we have to make a lot of changes.”

The players were spared having to face any abuse from supporters in public due to the pandemic restricting access to the Lisbon stadiums.

“It’s difficult to take also for the fans,” De Jong said. “Sorry to them.”