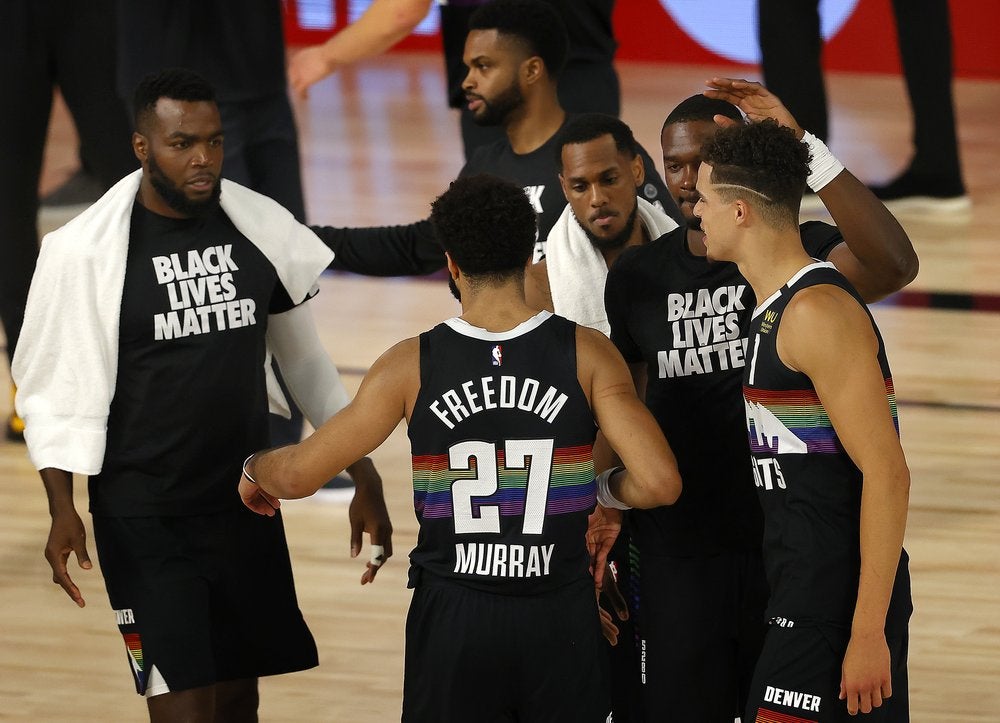 LAKE BUENA VISTA, Florida — Jamal Murray scored 33 of his 42 points in a second half where he played every minute and the Denver Nuggets avoided elimination by beating the Utah Jazz 117-107 on Tuesday night in Game 5.

The Nuggets trail the sixth-seeded Jazz 3-2 with Game 6 on Thursday.

Murray was unstoppable down the stretch in nearly matching his 50-point effort in Game 4. He hit 17 of 26 shots and had eight assists, including a pass to Nikola Jokic for a 3-pointer with 23.6 seconds remaining that sealed the win.

“Whenever he’s like that we are winning the game or we are really close,” said Jokic, who also didn’t sub out in the second half. “That’s what we need from him.”

The dynamic tandem of Murray and Jokic clearly weren’t ready to leave the NBA bubble just yet. Jokic had it going early as he scored 21 of his 31 points in the the first quarter.

Murray took over late after his team fell behind by as many as 15 points in the third quarter.

“We’ve all got a will to win. Simple as that,” explained Murray, who played through a bruise on his knee. “That can carrying you. That can take you places.”

With the game tied at 101, Murray scored nine straight for Denver to put the Nuggets up by nine with 1:20 to go.

Donovan Mitchell finished with 30 points while wearing a pair of bright, multicolored shoes. The sharpshooter is averaging 37.6 points over the five games.

Reserve Jordan Clarkson added 17 points and Joe Ingles found his rhythm with 13. Ingles had a combined two points in the previous two games.

“I thought at some level, we just lost our composure when we were ahead,” Jazz coach Quin Snyder said. “Oftentimes, when a team’s making a run you get a little distracted, and that’s when we have to come together even more. Our guys know that, and we’ll come out ready to play the next game.”

The Nuggets turned in their best third period of the series when they needed it most. Trailing 63-54 at halftime, they outscored the Jazz 28-23. Utah has dominated the third quarter by a 142-92 margin before Tuesday.

“This was a very important win for us to stay here and keep the series alive. We have to go out there and find a way to get a Game 6 and force a deciding Game 7,” Nuggets coach Michael Malone said. “Jamal and Nikola will be the keys to us continuing doing that.”

Jazz: Before the game, C Rudy Gobert had his two-year reign as the NBA’s Defensive Player of the Year come to an end with Milwaukee’s Giannis Antetokounmpo winning the award. Gobert had 11 points and 12 rebounds.

Nuggets: F Michael Porter Jr. had 15 points and F Jerami Grant chipped in 13. … Although G Gary Harris was upgraded to “questionable” for Game 5, that balky right hip sidelined him again. His last NBA game was March 11.

Mike Conley said there’s a lesson to be learned after the Jazz lost some of their focus with the lead.

“Not to let our minds get away from our task at hand,” Conley said. “The other team doesn’t care what’s going on in your mind. They’re going to keep pushing and keep going and keep fighting. That’s what teams like Denver do. They’re very good. They’re not going to lay down easy.”

Jokic hit all five 3-pointers he took in the first quarter. He’s the third player in the series to have five in a quarter, joining Murray (fourth quarter in Game 4) and Mitchell (third in Game 2).

According to Basketball Reference, the playoff record for 3-pointers in a quarter is held by Antoine Walker. He had six by in the second quarter on April 28, 2002.

Murray and Mitchell keep turning in big performances. Mitchell has a pair of games in the series where he went for 50 or more points.

Before their walk-through Tuesday morning, Malone and the Nuggets talked about the situation with Jacob Blake, a Black man whose shooting by police in Kenosha, Wisconsin, on Sunday has roiled the nation.