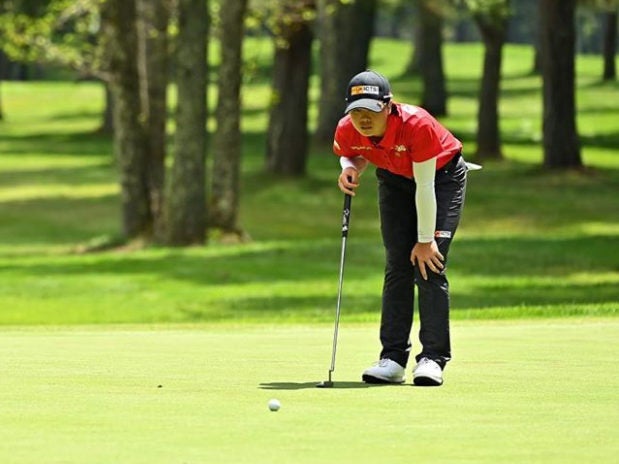 After holing out on the 12th green, Yuka Saso let out a very audible sigh—either out of frustration for missing back-to-back makeable birdies, or of relief after knocking down nervy short putts.

Luckily, she had done most of her work in the front nine, birdieing four of the last five holes there to build enough cushion to hold off a late-charging Sakura Koiwai and stay ahead by a shot after three rounds of the Nitori Ladies golf tournament in Hokkaido, Japan.

Saso finished her third round with a four-under 68 that put her at 12-under 204 and in the cross hairs of Koiwai (205) going into the final round.

Coming off a bogey on No. 4, the 19-year-old rookie of the Japan LPGA drained a birdie on No. 5 but left her approach in the next hole short, with her putt from just outside the green stopping short of the cup.

She got going on testy No. 7, which bedeviled both her flightmates, using a brilliant tee shot to set up a short birdie putt. She made it three in a row on the wait out for a a front 32 that gave her a four-stroke lead over her closest pursuers, who were in the flight ahead.

She could have padded her score in the first four holes of the back nine but missed sorry opportunities there. She misread the green on 11 and 12 and overcorrected breaks on both holes, settling for pars—and a sigh. As the skies opened up and umbrellas unfolded, Saso charged at the 575-yard, birdie-ripe 13th, which had been playing under par in the first two rounds, but overshot her approach into a bunker behind the green.

She blasted to within birdie distance again, but sent another curling putt grazing past the cup.

Those three chances left the door open for Koiwai, who was playing in the group ahead.

Kowai rattled off three birdies in four holes from 11 and then added another one on 17 to highlight a backside 32 and a flawless 66 for the day to move within a stroke of the lead.

Hikaru Yoshimoto (71) and Hinano Muguruma (69), were tied for third at 208, four down on Saso. Yu Hamada shot a 70 to move to 7-under for the tournament at fifth while Chie Arimura fired a 65 to move to sixth at 6-under.

Today’s 68 was Saso’s seventh round in the 60s out of the 10 she had played so far on the lucrative tour. She had only gone over par once. —FRANCIS T. J. OCHOA