After deciding to stay, Lakers could be in bubble a while | Inquirer Sports
Close
menu
search

After deciding to stay, Lakers could be in bubble a while 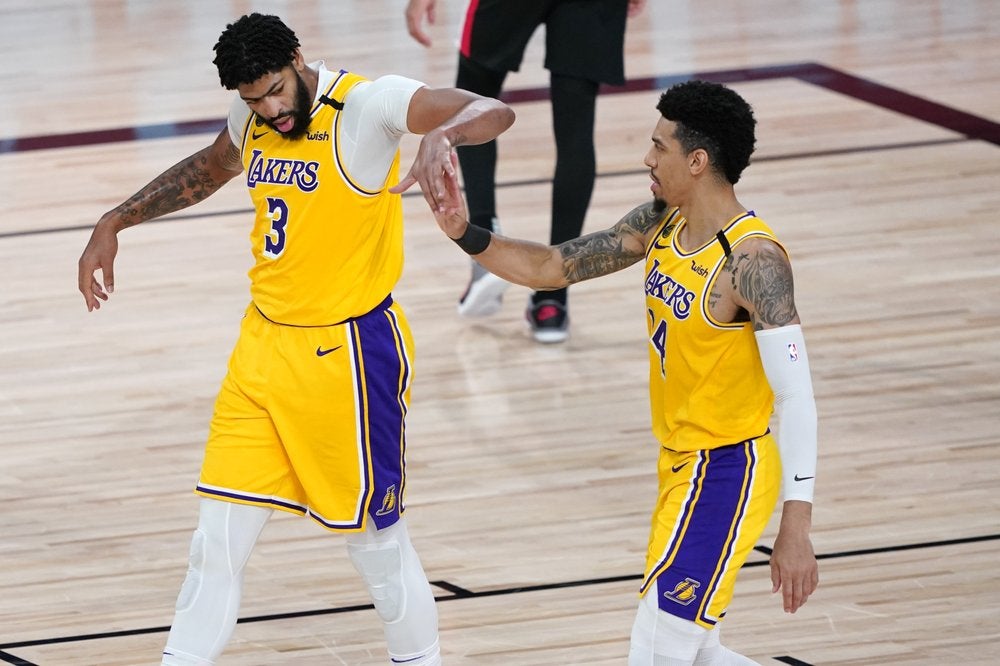 Los Angeles Lakers’ Anthony Davis (3) and Danny Green, right, celebrate after a play during the second half of an NBA basketball first round playoff game against the Portland Trail Blazers Saturday, Aug. 29, 2020, in Lake Buena Vista, Fla. The Lakers won 131-122 to win the series 4-1. (AP Photo/Ashley Landis)

LAKE BUENA VISTA, Florida — There was a point this week when LeBron James and the Lakers weren’t sure they would remain in the bubble.

They decided to stay and look like they could be here a while.

The Lakers moved into the Western Conference semifinals by finishing off the Portland Trail Blazers with a 131-122 victory on Saturday night.

It was the Lakers’ first series victory since 2012 and set them up for a second-round matchup against Houston or Oklahoma City. The Rockets lead 3-2 with Game 6 on Monday, so the Lakers will have some time off.

They just got back from a break.

Los Angeles was scheduled to play Wednesday night and the players were relaxing in their rooms when they got word that the Milwaukee Bucks had decided not to play their game that afternoon against Orlando. It was a surprise to everyone else in the league and there was some frustration that night when players held a meeting.

James was one of the frustrated people, having realized the Bucks hadn’t fully thought through their actions.

“And then from that point on, my mind began to figure out, what is the plan going forward? And if we don’t have a plan, then what are we talking about? Why are we still here?” James said.

“That’s what my mind went to. And at one point there was no plan of going forward. There was no plan of action. And me personally, I’m not that type of guy. I’m not a guy who one, doesn’t have a plan, and then is not ready to act on it as far as action.”

Players eventually came up with one and agreed with owners Thursday on some expanded initiatives, including increased voter participation and the creation of a social justice coalition.

James joked that he probably thinks about leaving the bubble at least once a day, but agreed with players that their hopes of getting their message about change out was best done in Disney.

When the Lakers finally got back on the court for the first time since Monday, they weren’t particularly sharp. Portland finished with its highest point total of the series despite playing without leading scorer Damian Lillard.

Anthony Davis said the Lakers know they have to get back to their usually stronger defense in the next round.

Davis scored 43 points and James had 36 points, 10 rebounds and 10 assists. The two All-Star forwards dominated the series after the No. 1 seed was knocked off in Game 1.

They could put up more big numbers in the next round if they play Houston, which uses a small lineup that would have trouble matching up. But even if they don’t, Davis thinks the Lakers will have a chance to win.