‘Little bit sad’: US Open show set to go on despite pandemic 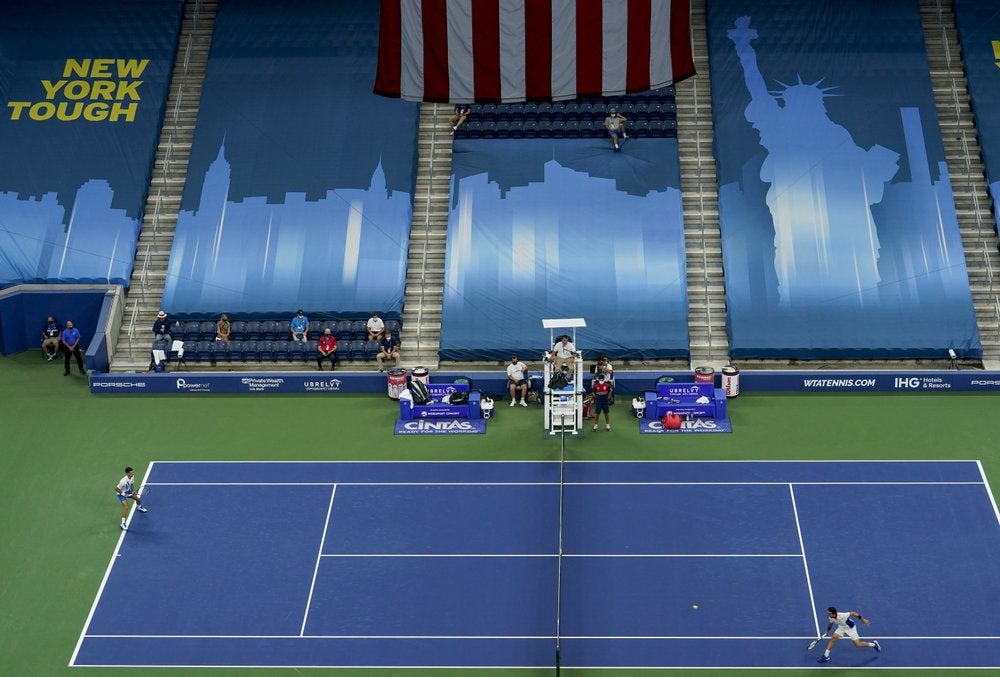 NEW YORK — Back in April, an on-schedule U.S. Open simply did not seem possible.

The coronavirus was at its peak in New York; a building on the tournament grounds housing indoor tennis courts was converted to a field hospital.

The pandemic was locking down much of society, including sports. Wimbledon was canceled for the first time in 75 years, the French Open was postponed, and the U.S. Tennis Association said it was considering “the possibility” of changing its dates, too.

On Monday, the last day of August, the 2020 U.S. Open will, indeed, begin — as scheduled, albeit without any spectators, and with one player dropped from the field because he tested positive for COVID-19.

Benoit Paire, a Frenchman who was seeded 17th, was replaced in the draw Sunday, a striking reminder of the circumstances surrounding this attempt to ensure that the Grand Slam show goes on.

There are many other reminders, such as the plastic signs propped up around the quieter-than-usual grounds, making a mix of requests and commands.

“Keep us all safe. Please wear a mask & keep your distance.”

“Unless you are eating, please wear your mask in the dining area.”

“Help us keep the bubble safe. Let us know if you witness unhealthy behavior,” with a phone number to call.

Merchandise shops are filled with empty shelves and undressed mannequins. Instead of a main plaza filled with fans eating and drinking and comparing purchases and talking about tennis, there is a space for players to hang out, with a putting green, basketball hoop, and giant chess board among the outdoor diversions offered.

“When you’re walking to and from practice — you have to get somewhere for a certain time — it’s nice. You know that there’s no one around, that you’re not going to get stopped,” said Andy Murray, who won the first of his three Grand Slam titles at Flushing Meadows in 2012. “Yeah, it’s very quiet and very relaxed.”

Then Murray described his thoughts during his trek to the locker room after a practice session last week.

“I was like, ’Wow, this is pretty sad, because usually this place is just filled with energy and atmosphere, like before the tournament starts,” he said. “Now it’s tennis players and their teams walking around with masks on. It’s just all very different and a little bit sad.”

When play begins Monday morning in Arthur Ashe Stadium — where many seats are covered by pieces of cloth with messages like “New York Tough” and “Black Lives Matter” — 2016 runner-up Karolina Pliskova, the top-seeded woman, will play Anhelina Kalinina in the opening match.

That distinction was not earned by virtue of being ranked No. 1, but because the women who hold the first two WTA spots, Ash Barty and Simona Halep, chose not to participate because of the pandemic.

In all, six of the top eight women are missing, including 2019 champion Bianca Andreescu.

If the women’s event seems unpredictable as can be — even with Serena Williams and her 23 Grand Slam singles trophies in the bracket — and it is hard to know just how well anyone will deal with lack of competition this year, the overwhelming favorite for the men’s championship is Novak Djokovic.

He is scheduled to begin Monday’s night session in Ashe against Damir Dzumhur, followed by two-time major champion Naomi Osaka — who pulled out of the Western & Southern Open final with an injured left hamstring — against Misaki Doi.

“I always love playing in New York. I think I’m not the only one who shares the opinion that this is probably the most exciting, energetic, dynamic, explosive tennis court that we have in the sport,” Djokovic said. “It is strange to see empty stands.”

He has won five of the past seven Grand Slam trophies to raise his total to 17, three shy of Federer’s record for men, two behind Nadal.

“You can sense that around the site there is a certain tension … because everyone is obviously being careful,” Djokovic said, “but at the same time, everyone needs to pay attention and follow the protocols and restrictions that are in place.”