On to Game 7: Raptors survive Celtics in double-OT thriller 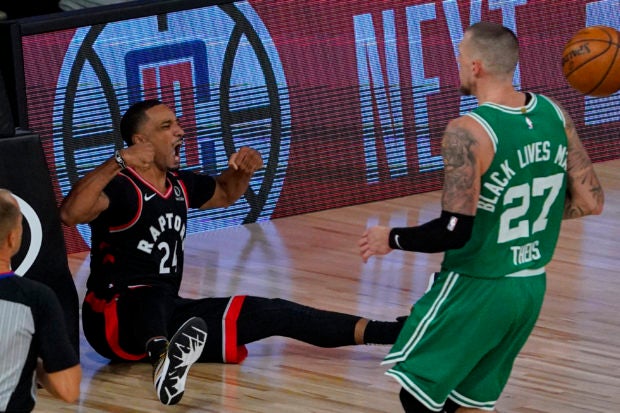 Exhausted and on the brink, the reigning NBA champions rose to the moment.

Next up: Game 7, for a spot in the Eastern Conference finals.

OG Anunoby — the hero of Game 3 with a buzzer-beating 3 — put the Raptors ahead to stay with a 3-pointer with just under a minute left in double overtime, Kyle Lowry got an acrobatic jumper to fall with 11.7 seconds left and the Raptors beat the Boston Celtics 125-122 in Game 6 on Wednesday night.

Lowry scored 33 points in 53 minutes for Toronto. Norman Powell had 23, including a pair of free throws with 5.0 seconds remaining. Fred VanVleet scored 21 points for the Raptors, who needed the win to extend their season, and Anunoby had 13 points and 13 rebounds.

Jaylen Brown had 31 points and 16 rebounds for the Celtics, who had their starters on the floor — without a single sub — for the final 22-plus minutes, going back to 23.5 seconds remaining in the third quarter.

Jayson Tatum had 29 points, 14 rebounds and nine assists. Marcus Smart had 23 points, 11 rebounds and 10 assists, and missed a 3-pointer that would have tied it with about 3 seconds left in the second extra session. Daniel Theis had 18 points for the Celtics. Theis played 47 minutes — the other four Boston starters, Tatum, Smart, Brown and Kemba Walker (who was held to five points), all logged at least 50. And tempers flared when it was over, everyone getting a few extra words in before Game 7 on Friday.

Boston led 52-48 at the break, after both teams had no shortage of offensive struggles in the opening half.

Raptors: Lowry played the entire second half again, the third time that happened in the last four games. … Lowry took a cut under his chin in the second quarter, which he argued was from a Boston elbow. No foul was called.

The Celtics will be in a Game 7 for the 33rd time; they’re 23-9 all-time — but have lost four of their last seven ultimate games.

Technically, home and road classifications still apply for record-keeping purposes in the bubble — so now, both teams are 0-3 “at home” in the series. Game 7 will be considered a Toronto home game.