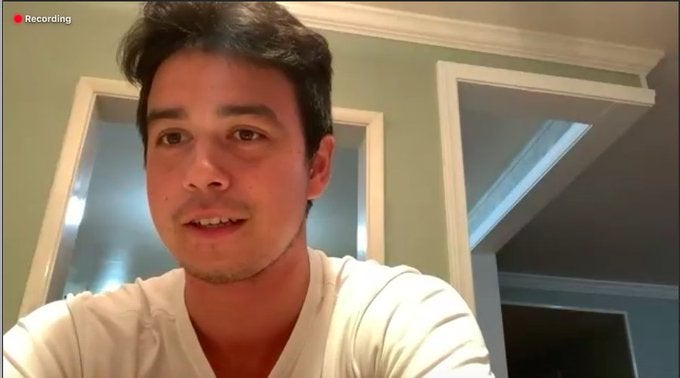 MANILA, Philippines—Ateneo continued to secure its future after it announced on Friday the transfer of Filipino-American guard Chris Koon.

It was a recruitment that lasted for three years with Blue Eagles team manager Epok Quimpo first having contact with the 19-year-old during a high school basketball game in California Koon’s Rolling Hills Preparatory and Chino Hills.

That long recruitment period eventually culminated with Koon completing his enrollment with a Management Economics course.

“He’s a very smart and tough player,” said Ateneo head coach Tab Baldwin Friday in a Zoom press conference. “Recruiting is a never ending effort, it’s a great feeling when you prioritize a player and he decides to go to your program.”

Koon stands at 6-foot-5, already a big man in Philippine standards, and will play as a guard under Baldwin’s system creating a large backcourt with Dwight Ramos.

“He [Baldwin] wants me to play at the perimeter but with my size I can play forward as well,” said Koon. “My goal is to get in shape because in the Philippines there are a lot of quicker players and you got to have a good balance of agility and speed.”

Ateneo announces their newest recruit Chris Koon. The incoming Blue Eagle is a 6-foot-5 guard but he will still serve his one-year residency after he transferred from Pomona College in California. pic.twitter.com/PN03INK0MK

The lefty do-it-all gunner already had one year of collegiate education at Cal Poly Pomona but redshirted his freshman season at the school.

Koon will also serve a one-year residency at Ateneo but he can still play the full five-year UAAP eligibility as he’ll only be 20-years-old when he suits up for the Blue Eagles and the league allows players of up to 25-years-old to play.

At his size, Koon can play the role of a Ben Simmons type of player but the studious guard wants to emulate San Antonio legend Manu Ginobili more than the Philadelphia 76er All-Star.

“Maybe I can shoot the ball a little better, dribble the ball and get in the lane then pass it off. He’s a really talented player but I want to be the best player that I can be,” said Koon. “I really like Manu as a lefty slashing the lane. He’s a team guy, he loves to win.”

What made Koon such an intriguiging prospect for Ateneo was his stellar work both on and off the floor, as Quimpo quipped.

His schoolwork was also at the top tier of his class as he maintained a 4.5 GPA in high school.

Koon was the second prized recruit Ateneo announced this week with Filipino-Italian shooter Gab Gomez the first one to commit to the Blue Eagles.