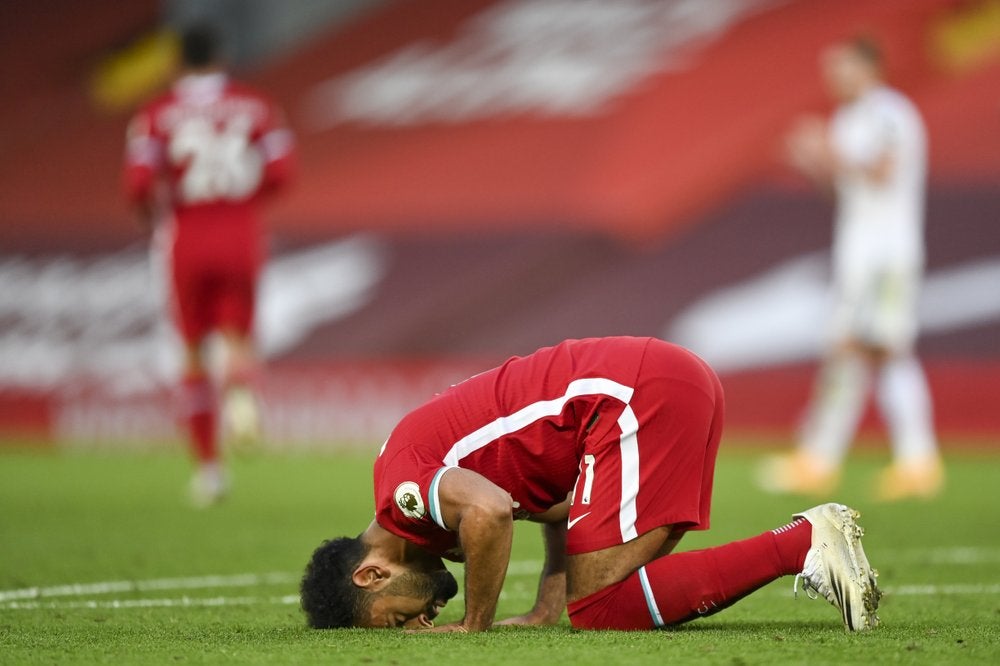 Liverpool’s Mohamed Salah celebrates after he scored his side’s fourth goal during the English Premier League soccer match between Liverpool and Leeds United, at the Anfield stadium, in Liverpool, Saturday, Sept. 12, 2020. (Shaun Botterill, Pool via AP)

Adopting his trademark crouching position in the technical area, Marcelo Bielsa closely studied the mayhem unfolding in front of him on the Anfield pitch.

Back in the top division after a 16-year absence, Leeds is certainly going to be a fun watch under the Argentine coaching great this season.

Bielsa’s team went toe-to-toe with Liverpool in the first match of the champion’s title defense and was denied a point only after conceding a late penalty, converted by Mohamed Salah to complete his hat trick and a wild 4-3 win for the hosts.

“It was eventful,” Liverpool defender Virgil van Dijk said with a smile, summing up a chaotic match.

“They are going to give trouble to many teams in the league.”

Leeds didn’t take a step back with its intense pressing style, coming from behind three times at an empty Anfield after initially going behind to Salah’s first penalty of the game in the fourth minute.

Salah was given the chance to win the match in the 88th minute after a foul by Leeds’ high-profile new signing, Spain striker Rodrigo, and the Egypt forward didn’t waste it.

The Premier League was starting a month later than scheduled due to the pandemic that is still preventing fans from attending games. With the home crowd at Anfield often regarded as the team’s “12th man,” Liverpool is affected by the situation as much as anyone else.

“Without fans it’s so tough, especially at Anfield. Everybody knows that,” said Salah, who scored in the opening round of a Premier League for the fourth straight year. “But it’s a good start for us.”

Arsenal also opened against a promoted team and found it much more straightforward.

Fulham was swotted aside in a 3-0 home loss to the Gunners, with Brazil winger Willian setting up all of the goals on his debut after a cross-London switch from Chelsea.

Alexandre Lacazette, Gabriel — another debutant from Brazil — and Pierre-Emerick Aubameyang were the beneficiaries of Willian’s work at Craven Cottage.

“I don’t think it gets much better than that,” Arsenal manager Mikel Arteta said after his team opened league play having already featured in the first match of the English season — a win over Liverpool in the Community Shield at Wembley Stadium last month.

It already looks destined to be a long season for Fulham, whose defending was suspect when they were relegated from the Premier League two seasons ago after conceding a division-high 81 goals.

“This year we are going to lose football matches,” Fulham manager Scott Parker said, “but what we can’t afford to do is when you go and lose two or three on the bounce — which is going to happen with us — let it cripple you.”

Crystal Palace defied a long injury list to beat Southampton 1-0 thanks to a 13th-minute goal from Wilfried Zaha, the team’s talismanic forward.

With five defenders missing, Palace manager Roy Hodgson fielded a makeshift back line which managed to keep at bay a Southampton team that was one of the strongest teams on the road last season.

Zaha, who grabbed the winner with a volley from Andros Townsend’s cross, started as a central striker to give him freedom. His goal was a reminder of his talents after a quiet 2019-20 season which meant there has been less noise than usual about a possible move away from Palace.

“Every transfer window I have been involved in, Wilf has made noises he would like to play for a club that can offer him Champions League football and a step up in his career after he has given us so much good service,” Hodgson said. “But for anything to happen, that club needs to come in and pay the asking price and until that time happens, I am very happy to keep working with Wilf.”

Newcastle’s seemingly astute work in the transfer market in recent weeks might help to ease frustration at the club after the collapse of a Saudi-backed takeover bid.

Callum Wilson and Jeff Hendrick, two of the offseason signings, marked their debuts by scoring in a 2-0 win at West Ham.

Hendrick provided a flick-on for Wilson to poke him the opener in the 56th, before scoring himself in the 87th at London Stadium.

Left back Jamal Lewis, an offseason arrival from Norwich, also started and impressed against West Ham.