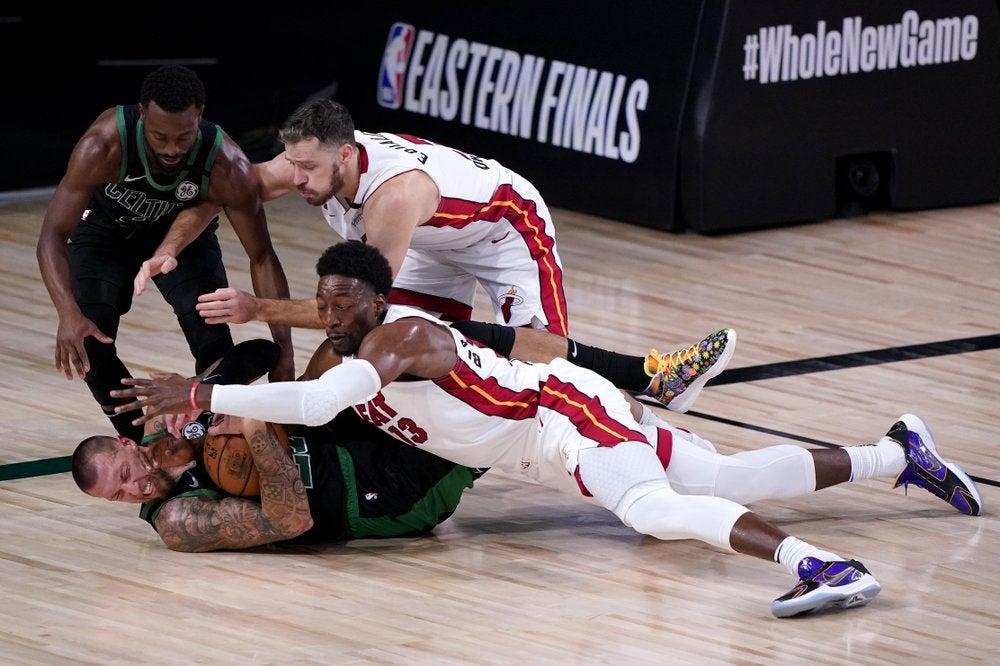 LAKE BUENA VISTA, Florida — The formula that the Miami Heat had backed themselves into using throughout this postseason wasn’t exactly ideal.

It’s not a sustainable plan, and the Boston Celtics finally showed that in Game 3 of the Eastern Conference finals when they pulled off a wire-to-wire win over Miami, not letting the Heat put together their typical comeback. Game 4 of the East title series — with Miami still leading 2-1 — is Wednesday, and the Heat are insisting that there will be more urgency at the beginning.

“I think we’ve just got to start off better,” Heat forward Jimmy Butler said. “I don’t think we started off anywhere near where we’re capable of. I think we dig ourselves a hole and try to fight back out of it. I think going into this next one, it’s up to the starting five to come out with a great start.”

Before Game 3, Miami was 8-0 in the playoffs when trailing after the first quarter — after going 10-16 when put in that position during the regular season. In the 36 minutes of the first-period action against the Celtics, the Heat have led roughly one-sixth of the time.

Butler is 1 for 6 in 29 first-quarter minutes in the series. Duncan Robinson and Goran Dragic are a combined 10 for 19; the rest of the Heat in first quarters against the Celtics are 11 for 46. Boston has won the first quarters by a combined score of 88-68, shooting 54% to Miami’s 32%.

“Certainly, it would help to be able to get off to a good start,” Heat coach Erik Spoelstra said. “But you have to play good basketball more consistently when you get to this point in the conference finals against a quality opponent.”

Another wild stat is this: Boston has outscored Miami 50-18 from 2-point range in first quarters so far in the series. And yet, somehow, the Celtics still need a win on Wednesday to even up matters — or fall into the dreaded 3-1 series hole.

The teams have had three full days off since Game 3, a quirk in the schedule to allow the Western Conference finals matchup between the Los Angeles Lakers and Denver Nuggets to catch up; the Lakers and Nuggets were to play the third game in their series Tuesday night.

Celtics forward Jayson Tatum offered a simple reason why Boston should be able to keep its edge after a win.

“Because we’re still down 2-1,” Tatum said. “It’s never time to relax in a series until it’s over with. Even more sense of urgency when you’re down. We’re still losing. We know that. We won’t get it all back in one game. We just got to go one game at a time.”

Some of what to know going into Wednesday night:

Not that this one needs explaining, but Miami’s chances go up considerably in this series if the Heat find a way to win Game 4. The Heat are 11-0 in series where they lead 3-1, and 9-9 in series where it’s tied 2-2 after four games. The Celtics haven’t successfully overcome a 3-1 deficit since the 1981 East finals.

The Heat have scored exactly 106 points in regulation in each of the three games in this series. It’s the first time Miami has scored the same number of points in the first 48 minutes of three consecutive games since Jan. 7-10, 1997 — when the Heat had 85 in a loss to Seattle, 85 in a win at Portland and 85 in a loss to the Los Angeles Lakers.

The Celtics announced Tuesday that Romeo Langford had surgery to repair a ligament issue in his right wrist and will miss the rest of the season. The rookie guard from Indiana appeared in 32 games during the regular season and seven more in the playoffs.