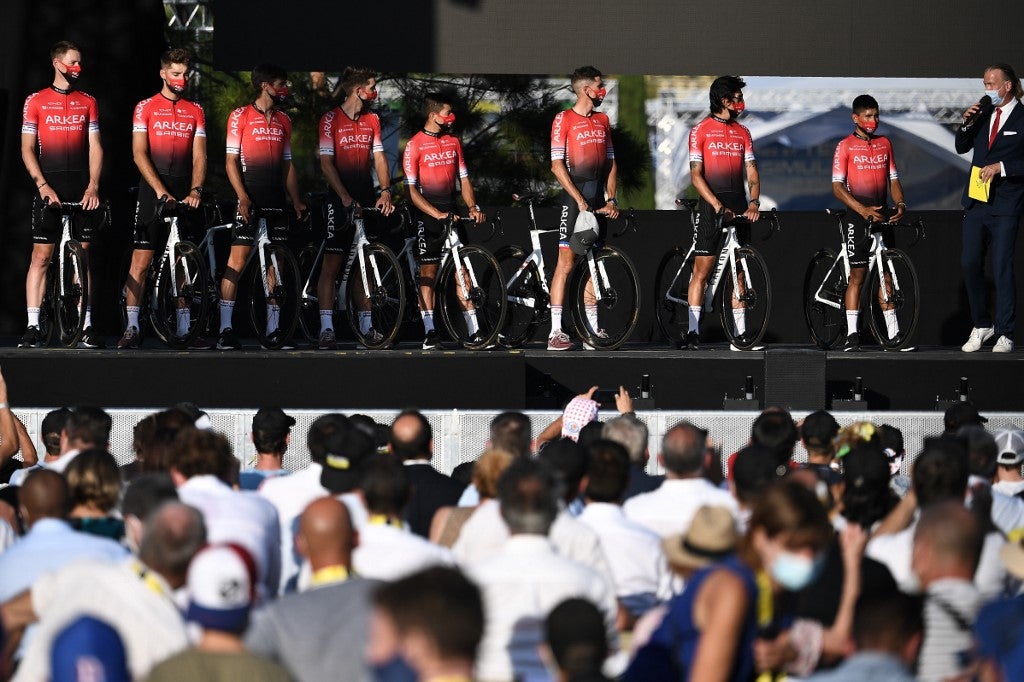 (FILES) In this file photograph taken on August 27, 2020, Team Arkea-Samsic riders attend the teams’ presentation two days before the start of the 1st stage of the 107th edition of the Tour de France cycling race, in Nice southern France. (Photo by Anne-Christine POUJOULAT / AFP)

The leader of a Tour de France team caught up in a doping investigation said he had “nothing to hide” after two unnamed members of the French outfit were detained.

Colombian rider Nairo Quintana, 30, leader of the Arkea-Samsic team and winner of the 2014 Giro d’Italia, said no drugs were discovered during the investigation.

“No doping substance has ever been found,” he said in a statement late on Tuesday.

Police detained two people from the Arkea-Samsic team on Monday. French daily Le Parisien reported that they were a doctor and physiotherapist.

A source familiar with the matter told AFP that searches had targeted several riders including Quintana’s brother Dayer, as well as members of the medical team.

It is the most significant investigation in years for the repeatedly scandal-hit Tour, which wrapped up Sunday in Paris with a surprise victory for 21-year-old debutant Tadej Pogacar, the youngest winner in more than a century.

One major probe was in 1998, when customs officials stopped a vehicle laden with doping products and the Festina team was thrown off the race as the peloton headed into Paris.

Most notoriously, US star rider Lance Armstrong, who won from 1999-2005, admitted doping in 2013 and was stripped of his record seven titles.

Prosecutor Dominique Laurens in the southern city of Marseille said the current investigation was targeting a “small part” of Arkea-Samsic.

He added that the two detained had “many health products including drugs in their personal belongings, but also and above all a method that can be qualified as doping.”

The French team’s general manager Emmanuel Hubert told AFP he was supporting his athletes and that the probe involved only “a very limited number of riders, as well as their close entourage who are not employed by the team”.

“But if it turned out that at the end of the current investigation, elements came to confirm the truth of doping practices, the team would immediately dissociate itself from such acts and would take the necessary measures without delay,” Hubert said.

He added that the investigation “does not target the team or its staff directly.”

The probe will have come as a huge disappointment to organizers after positive headlines about the against-the-odds organization of the race and the drama that saw Pogacar seize victory late in the race.

Many had predicted the COVID-19 pandemic would prevent the riders from making it the 3,400 kilometers (2,100 miles) from the Mediterranean city of Nice to the French capital.

The prosecutor’s statement said the investigation is focused on the prescription of a substance or banned method for athletes, as well as help and encouragement in its use.

Quintana finished the Tour in 17th place, more than an hour behind the winner Pogacar. Quintana’s teammate Warren Barguil finished in 14th place.