‘Not enough’: US athletes decry charges in Breonna Taylor shooting 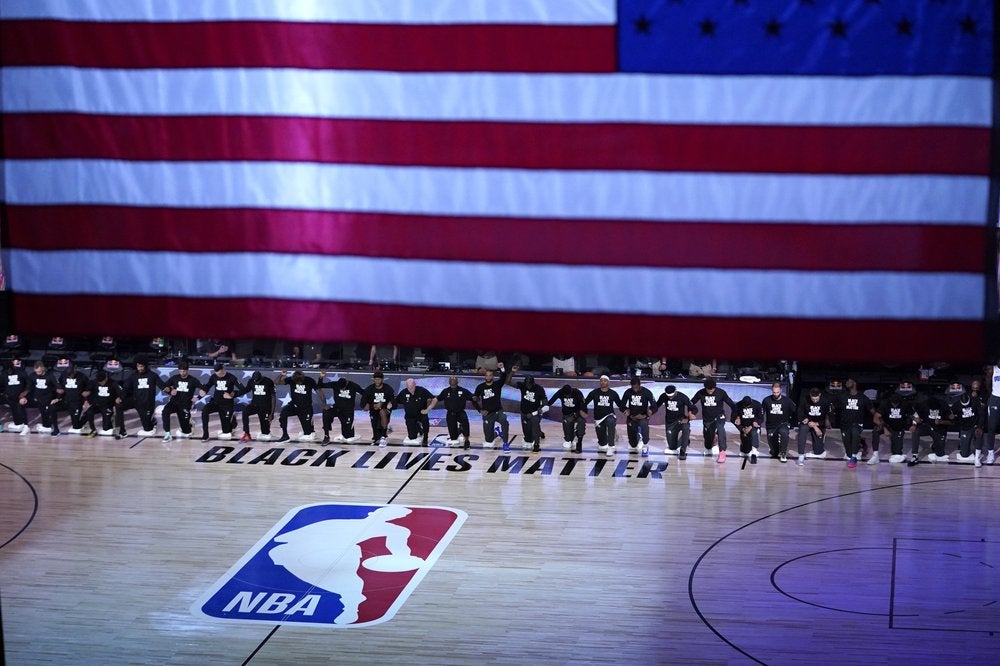 Members of the Orlando Magic and Brooklyn Nets kneel around a Black Lives Matter logo during the national anthem before the start of an NBA basketball game Friday, July 31, 2020, in Lake Buena Vista, Fla. (AP Photo/Ashley Landis, Pool)

US sports figures who have used their platforms to back the Black Lives Matter movement and call for police reform reacted with dismay to the charges filed Wednesday in the shooting death of Breonna Taylor.

Taylor, an emergency room technician, was shot dead after three plainclothes policemen turned up at her door in the middle of the night to execute a search warrant.

Neither Hankison nor the two officers who fired the shots that killed Taylor were charged in direct connection with her death.

“Something was done, but it wasn’t enough. Most guys thought it was definitely not enough,” Los Angeles Lakers guard Danny Green told reporters after the team trained in the NBA’s quarantine bubble in Orlando, Florida.

Messages backing the Black Lives Matter movement and calls for police reform have been a hallmark of the league’s return to play in the wake of a coronavirus hiatus.

I’ve been lost for words today! I’m devastated, hurt, sad, mad! We want Justice for Breonna yet justice was met for her neighbors apartment walls and not her beautiful life. Was I surprised at the verdict. Absolutely not but damnit I was & still am hurt and heavy hearted! I send

“I’m devastated, hurt, sad, mad!” LeBron James wrote on Twitter. “We want Justice for Breonna yet justice was met for her neighbors apartment walls and not her beautiful life.

The playoffs were halted in the bubble for three days after Milwaukee Bucks players, shocked by the police shooting of Jacob Blake in Wisconsin, refused to take to the court and players on other teams backed their move.

Green said NBA players would continue to try to find ways to promote the cause of racial justice and police reform.

“It’s a tough one. We’re still trying to make the proper steps… What happened today wasn’t enough. We felt, and I’m sure most people around the country felt the same.”

Golden State Warriors coach Steve Kerr spoke about the grand jury decision to The Athletic after his NBA team trained in California.

“I just keep thinking about the generation of American kids of any color. Is this way the way we want to raise them? Is this the country we want to live in? There’s just so much violence and it’s demoralizing when we can’t be accountable or hold anyone to account for it.”

“To be honest I wasn’t surprised by the verdict,” said Brown after Wednesday night’s playoff game. “This society, the way it was built …. its intentions were to never protect and serve people of color.”

My heart is with the family of Breonna Taylor right now. My god. This is devastating and unfortunately not surprising. Black and brown folx in this country deserve so much more. #BlackLivesMatter #JusticeforBreonnaTalyor #DefundPolice #RegisterToVote

“My heart is with the family of Breonna Taylor right now,” Rapinoe said on social media. “My god. This is devastating and unfortunately not surprising. Black and brown folx in this country deserve so much more.”