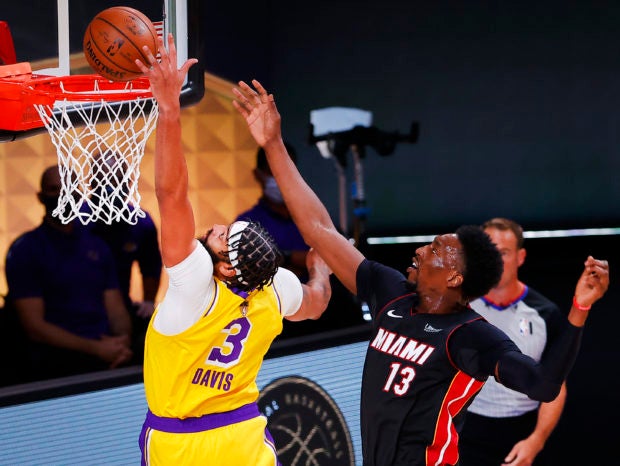 ORLANDO, Florida –  Injured Miami Heat stars Goran Dragic and Bam Adebayo were both listed as doubtful Thursday for game two of the NBA Finals, dealing a hammer blow to the franchise’s hopes of leveling the series.

A day after the Heat were pounded 116-98 by the Los Angeles Lakers in game one, Miami’s task became more daunting after confirmation of injuries to both Dragic and Adebayo.

Dragic has suffered a torn plantar fascia in his left foot while a scan revealed Adebayo is nursing a neck strain in his left side.

Both are doubtful to play on Friday, the Heat said in a statement.

Injuries to Dragic and Adebayo deprive Miami of two of the team’s most important players in their run to the finals.

Miami talisman Jimmy Butler, who rolled an ankle in Wednesday’s mauling but is fit to play on Friday, said Thursday he believed the team could bounce back.

“Knowing we may be a couple men down, other guys are going to have to step up in a big way,” Butler said. “I’m really, really excited to see how we bounce back, but I think we’re capable of it.”

Butler, meanwhile, said he had spoken to a downcast Dragic since the injury, revealing that the giant Slovenian believed he had let down his teammates.

“It’s just tough to see him in this position because he cares about the game, cares about his teammates, and he really wants to win,” Butler said.

“You can hear that pain in his voice, of him feeling like that he may have let us down, but he did not, and I want him to know that.

“He has carried us to this point, and it’s only our duty to pay that back to him right now.”

Miami coach Erik Spoelstra said he was confident the team possessed enough depth to remain competitive, noting that the roster had forged tight bonds inside the Orlando bubble.

“At this point, it’s all hands on deck, and it’s not like the guys that were potentially sliding into the rotation haven’t played before,” Spoelstra said.

“These guys have confidence and have played big roles for us all year long. Our depth has been one of our biggest strengths. We’ve utilized our depth all year long.

“The other benefit of all of this is we’ve been in this bubble with an extra training camp and everybody has gotten great work in, regardless of whether they’ve gotten big-time minutes in these playoffs series.

“We’ll just have to see tomorrow who’s available and make the adjustments accordingly.”