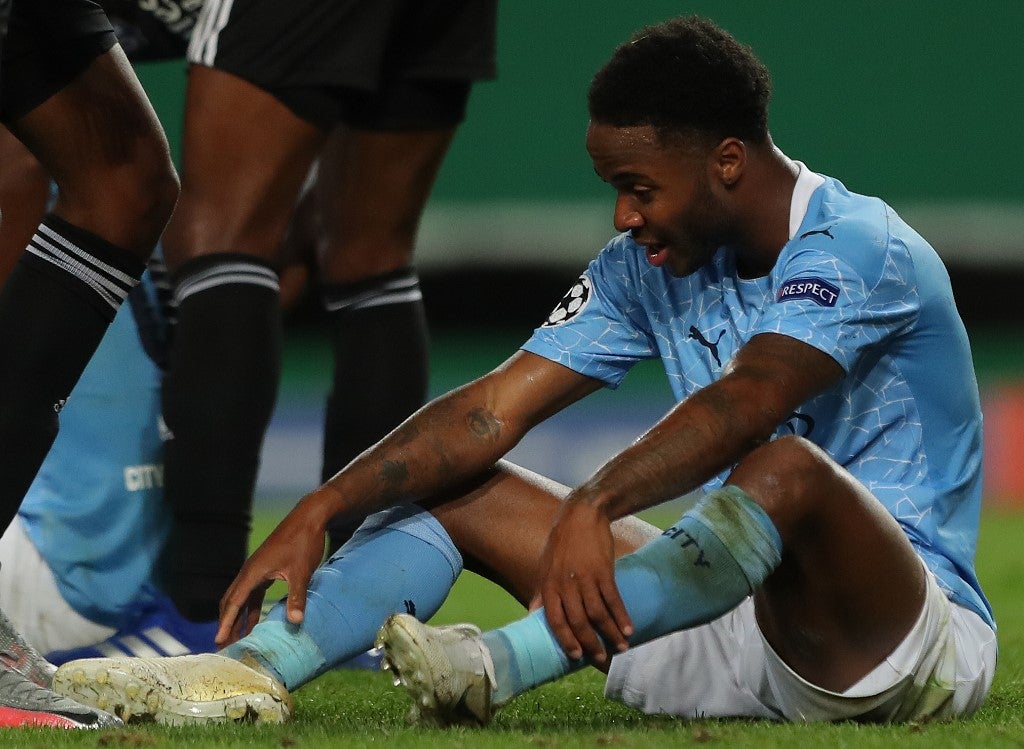 Manchester City’s English midfielder Raheem Sterling reacts to his team’s defeat at the end of the UEFA Champions League quarter-final football match between Manchester City and Lyon at the Jose Alvalade stadium in Lisbon on August 15, 2020. (Photo by Miguel A. Lopes / POOL / AFP)

Manchester City was forced to settle for a pulsating 1-1 draw against Leeds as Rodrigo punished Ederson’s mistake, while Chelsea’s big spending began to bear fruit as they thrashed Crystal Palace 4-0 on Saturday.

While Chelsea clicked into gear and City struggled to find their rhythm, James Rodriguez guided Everton to the top of the Premier League by scoring twice in a 4-2 win over Brighton.

City was humiliated last weekend when Leicester won 5-2 at the Etihad and Pep Guardiola responded by splashing out on Benfica defender Ruben Dias.

Dias made his debut at Elland Road and the Portugal center-back had his work cut out for him in an entertaining game packed with chances at both ends.

Raheem Sterling fired City into a deserved 16th-minute lead, cutting inside on the left edge of the penalty area driving his low shot inside the far post.

But City’s failure to turn their early dominance into more goals proved costly as Rodrigo pounced on a mistake by Brazilian goalkeeper Ederson to turn the ball home from close range in the 59th minute.

“That was good. When both teams want to attack, it’s a good game. We made an incredible first 30 minutes,” Guardiola said of the showdown with his managerial mentor Marcelo Bielsa.

“My team, for the position we’re in, showed incredible behaviour. It’s not easy to play against Leeds. They’ve showed how good they are.”

City has won just one of their first three league games and could fall eight points behind champions Liverpool should Jurgen Klopp’s men win at Aston Villa on Sunday.

For promoted Leeds, this buccaneering performance was further proof that Bielsa’s commitment to attacking play can flourish in the top-flight.

“Leeds have been waiting a long time to be in this league and I think we showed we are prepared for this,” said Rodrigo.

Frank Lampard has asked for patience after Chelsea’s £220 million splurge in the market ($285 million), but the pressure was on the Blues to respond after a disappointing 3-3 draw at newly-promoted West Brom and a League Cup exit to a much-changed Tottenham in the past week.

For the first time Lampard was able to field five of his new signings as Edouard Mendy and Ben Chilwell made their Premier League debuts with Thiago Silva, Kai Havertz and Timo Werner also starting.

Chilwell had the biggest impact as he opened the floodgates with a thunderous strike at the far post five minutes into the second-half before his cross teed up Kurt Zouma to double Chelsea’s lead.

What should have been a routine win for the hosts did not go without controversy as Jorginho then slotted home two penalties after Tammy Abraham and Havertz had been felled inside the area.

However, for the second spot-kick, captain Cesar Azpilicueta had to intervene to take the ball off Abraham with the England striker desperate to get on the scoresheet.

“I appreciate his eagerness because his performance deserved a goal but the rules are you don’t jump up ahead of the list at any moment,” said Lampard.

Everton will head into the Merseyside derby against Liverpool after the international window with maximum points from their first four games as James again shone for Carlo Ancelotti’s men.

The Toffees also have the Premier League’s form striker in their armoury as Dominic Calvert-Lewin opened the scoring by heading home his ninth goal of the season.

Jordan Pickford’s howler let Brighton back into the game as the Everton keeper’s fumble was converted by Neal Maupay.

“We are really pleased for the start, we did really well this period, winning games, showing good quality. The spirit is good, but it is only the start of the season,” Ancelotti said.

Newcastle moved up to sixth as Callum Wilson’s double saw off Burnley 3-1.

Allan Saint-Maximin’s fine individual effort opened the scoring for the Magpies before Ashley Westwood deservedly levelled for Burnley early in the second half.

But the Clarets remain without a point this season as they had no answer to the pace of Saint-Maximin as he set up Wilson to restore Newcastle’s lead.

The England international then scored his fourth goal in as many Premier League games for Steve Bruce’s men from the penalty spot after Ryan Fraser was fouled by Nick Pope.