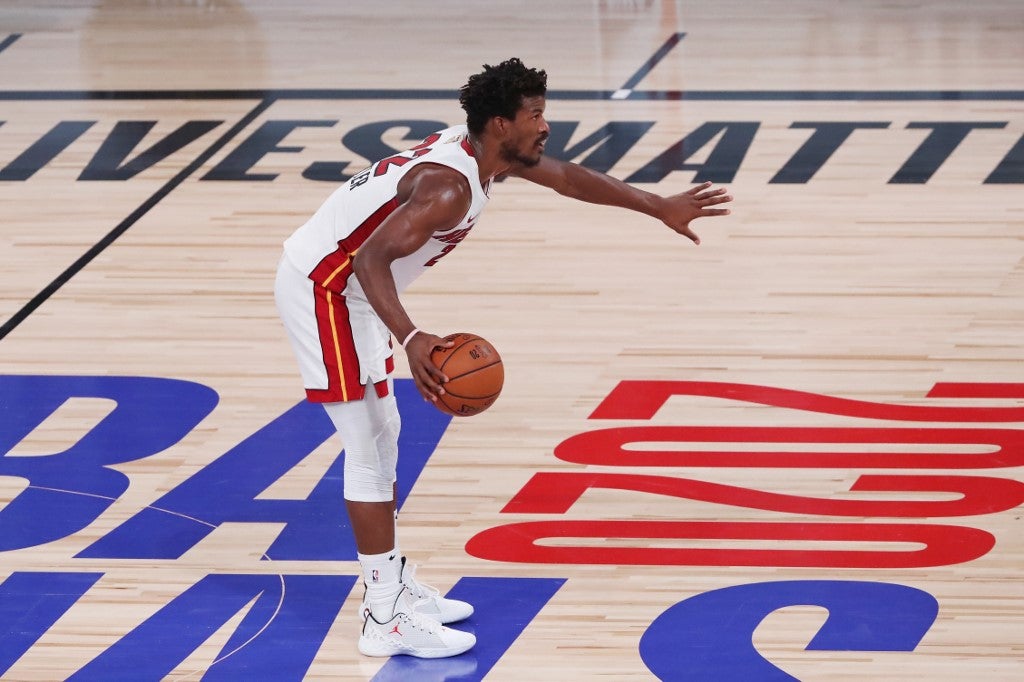 Jimmy Butler #22 of the Miami Heat reacts during the second quarter against the Los Angeles Lakers in Game Five of the 2020 NBA Finals at AdventHealth Arena at the ESPN Wide World Of Sports Complex on October 9, 2020 in Lake Buena Vista, Florida. Sam Greenwood/Getty Images/AFP

Jimmy Butler’s triple-double propelled Miami to a 111-108 victory over the Los Angeles Lakers on Friday that kept the Heat alive in the NBA Finals.

Butler scored 35 points with 12 rebounds and 11 assists and the Heat withstood a 40-point performance from Lakers superstar LeBron James to deny Los Angeles a title-clinching win in the NBA’s quarantine bubble at Orlando.

The Lakers still lead the best-of-seven series three games to two and can secure the title with a game-six victory on Sunday.

“We just played hard,” said Butler, who has insisted the Heat can become just the second NBA team to rally from a 3-1 deficit to win the championship series.

“We got where we wanted to on offense, shared the ball like we always do.

“This is a game of runs — I think we withstood there.”

Butler drained two free throws with 16.8 seconds left to put Miami up by one.

On a night that saw the Heat lead much of the way, Kentavious Caldwell-Pope’s three-pointer with 6:18 remaining put the Lakers up 97-96 — their first lead since the first quarter.

But the Heat dug in, Duncan Robinson’s three-pointer putting Miami back up, 101-99 with 3:16 remaining, and it was a heavyweight slugfest the rest of the way, the lead changing hands seven more times.

“It was all about getting stops, getting what we wanted on offense,” Butler said. “I still don’t think we rebounded the ball the way we were supposed to close out the game.

“This one, it was a little bit of luck that Danny Green missed that one at the top of the key.”

James added 13 rebounds and seven assists for the Lakers.

The frantic finish was foreshadowed by a first quarter that saw eight lead changes.

The tension was palpable when Los Angeles center Dwight Howard tangled with Butler and the two had to be separated less than five minutes into the contest, each receiving a technical foul.

The Lakers got an early injury scare when Davis, battling Andre Iguodala for a rebound late in the first quarter, took an awkward hop and limped off the court.

The Lakers, trailing 25-24 through one quarter, said Davis had aggravated a right heel contusion. He stayed on the sideline, testing the injury as the game continued and returning in the second quarter.

The Heat twice pushed their lead to 11 points in the second period, Nunn’s putback layup making it 50-39 with 3:41 left in the first half.

Butler poured in 22 points in the first half on seven-of-10 shooting. He grabbed six rebounds and six assists and the Heat did a fine job of keeping Davis out of the paint.

But James made sure the Lakers kept it close with 21 first-half points while Davis had 13 before the break.