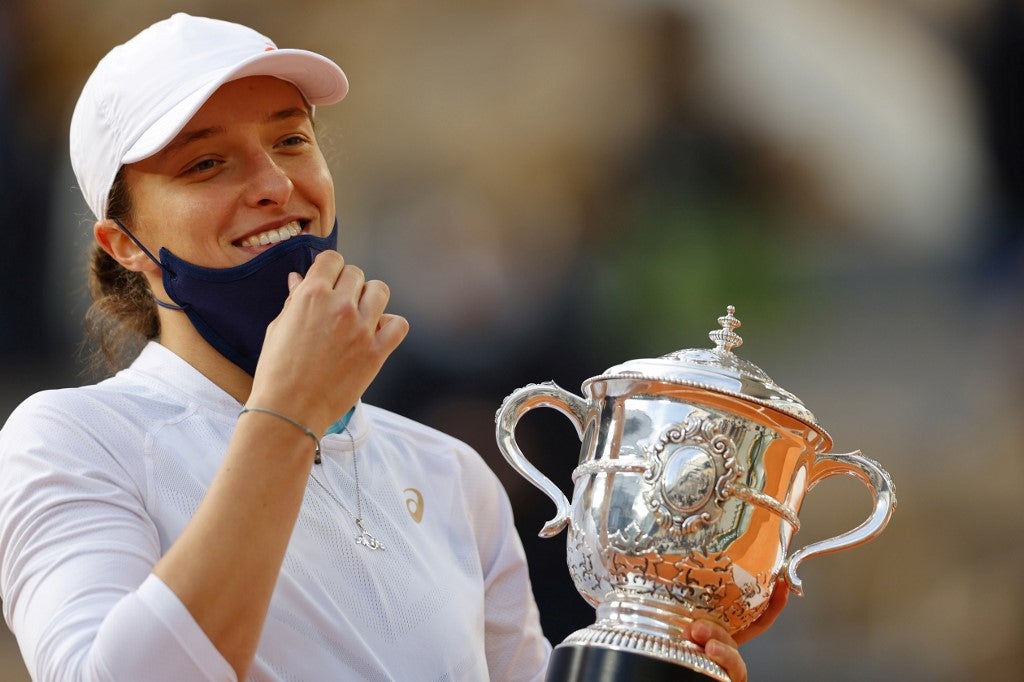 Poland’s Iga Swiatek celebrates with the Suzanne Lenglen trophy during the podium ceremony after winning the women’s singles final tennis match against Sofia Kenin of the US, at the Philippe Chatrier court, on Day 14 of The Roland Garros 2020 French Open tennis tournament in Paris on October 10, 2020. (Photo by Thomas SAMSON / AFP)

Iga Swiatek called her French Open title “a life-changing experience” and said her biggest challenge would be to try match the consistency of her hero, 12-time Roland Garros champion Rafael Nadal.

She eclipsed the run of compatriot Jadwiga Jedrzejowska — the most outstanding Polish player of the interwar period — who finished runner-up at Roland Garros in 1939.

“It’s crazy for me because I watched Rafael Nadal lift the trophy every year and now I’m in the same place,” said Swiatek.

“I wasn’t expecting to win this trophy. It’s obviously amazing for me. It’s, like, a life-changing experience.”

Swiatek, ranked 54, is the lowest-ranked player in the modern era to lift the Coupe Suzanne Lenglen — her first title of any sort at tour level.

She will rise to a career-high of 17th on Monday after becoming the youngest women’s French Open winner since an 18-year-old Monica Seles in 1992.

Her style has been likened by three-time Roland Garros champion Mats Wilander to that of world number one Novak Djokovic, who along with Nadal and Roger Federer have combined to win 56 Grand Slam titles.

“Really I feel like I can progress in most of the things because I’m only 19. I know my game isn’t developed perfectly,” said Swiatek.

“Also I think the biggest change for me is going to be to be consistent. I think this is what women’s tennis is struggling with.

“That’s why we have so many new Grand Slam winners because we are not as consistent as Rafa, Roger, and Novak. That’s why my goal is going to be to be consistent. It’s going to be really hard to achieve that.”

Swiatek was only the second Polish woman to reach a Grand Slam final in the Open era after Agnieszka Radwanska, but quickly dismissed comparisons with the 2012 Wimbledon runner-up.

“I just feel like I kind of made history. But I still think that Radwanska, she achieved a lot because she played on the top level of WTA for, I don’t know, 12 years. I don’t even know the number,” said Swiatek.

“I know there’s going to be a lot of people who are going to compare us. But I think I have to be really consistent for the next couple years for everybody to name me the best player in Poland because still I have a lot to do.

“Still I think that’s kind of her place, you know.”

Swiatek received a message of congratulations from Polish football star Robert Lewandowski, and the Warsaw native is expecting a hearty welcome on her return home.

“I know it’s going to be crazy. I think I’m going to get used to that, it’s not going to be a problem for me,” she said.

“I didn’t have problem with, like, getting attention, with people surrounding me. I think it’s going to be okay for me. I really appreciate all the support I got during whole two weeks.

“I know that the whole country was behind me and they all believed in me. I’m going to be happy and proud.”