Finals MVP LeBron James savors 4th title like no other 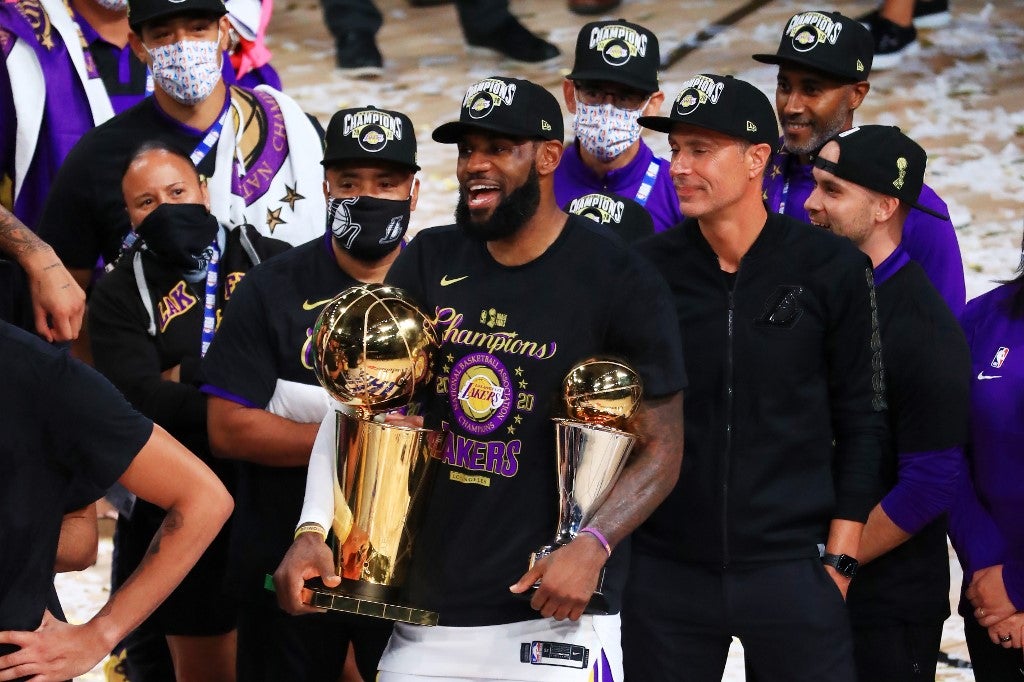 LeBron James #23 of the Los Angeles Lakers reacts with his MVP trophy and Finals trophy after winning the 2020 NBA Championship over the Miami Heat in Game Six of the 2020 NBA Finals at AdventHealth Arena at the ESPN Wide World Of Sports Complex on October 11, 2020 in Lake Buena Vista, Florida. Mike Ehrmann/Getty Images/AFP

The sight of LeBron James hoisting an NBA championship trophy as Most Valuable Player of the title series was no surprise — but the path he took to a fourth career crown was anything but usual.

“I can just say that I’ve never won with this atmosphere. None of us have. We’ve never been a part of this.”

This championship series unfolded in the NBA’s quarantine bubble in Orlando, Florida, where teams spent three months finishing out a season that had been brought to a halt in March by the coronavirus pandemic.

James said the isolation of the bubble made this title run a unique challenge.

“So this is right up there,” he said of where he ranks his first championship with the Los Angeles Lakers, after title runs with the Miami Heat in 2012 and 2013 and the Cleveland Cavaliers in 2016.

“I heard some rumblings from people that are not in the bubble: ‘Oh, you don’t have to travel, whatever. People just doubting what goes on in here.

“This is right up there with one of the greatest accomplishments I’ve had.”

James’s four Finals MVPs are second only to the six of Michael Jordan.

He posted a triple-double of 28 points, 14 rebounds and 10 assists in the title-clinching 106-93 victory over the Miami Heat in game six.

It was his 11th Finals triple-double, and he came close to averaging a triple-double in the series with 29.8 points, 11.8 rebounds and 8.5 assists per game as he made good on the promise he made to Lakers president Jeanie Buss when he arrived in Los Angeles in 2018.

Injury in his first season with the storied club saw them miss the playoffs. Now they are tied with the Boston Celtics for most titles in history with 17.

“And I want my damn respect, too,” James said.

And he said respect was owing to the NBA, as well, for putting together the Orlando campus — where there were zero positive COVID-19 tests among players — and for facilitating player efforts to speak out on social and racial justice issues.

For most of his time in the bubble, James said, he tried to concentrate on his competitive task.

“I wanted to keep my energy in the right space,” he said, but added: “Over the last couple days, you definitely thought about it. You thought about just being here, how successful it is.

“I think we can all say from the social injustice conversations, the voter suppression, police brutality, to have this platform, have our players be able to unite like that, it’s something that you will miss.”