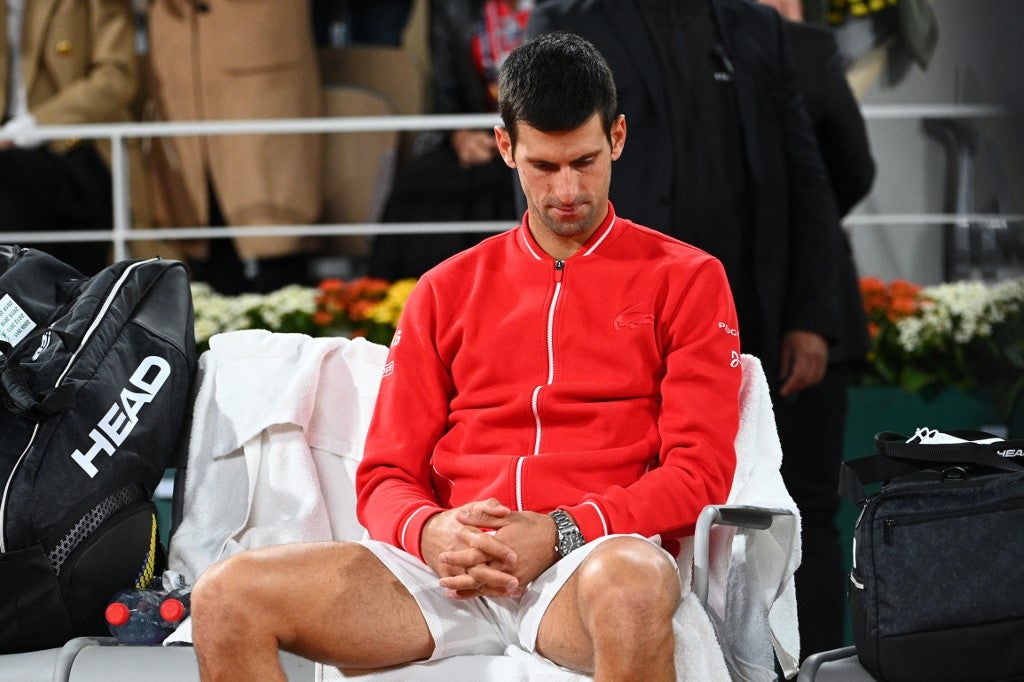 Serbia’s Novak Djokovic reacts at the end of the men’s final tennis match against winner Spain’s Rafael Nadal at the Philippe Chatrier court on Day 15 of The Roland Garros 2020 French Open tennis tournament in Paris on October 11, 2020. (Photo by Anne-Christine POUJOULAT / AFP)

Novak Djokovic said the “greatest of defeats” in his career had taught him more than anything else as he suffered a straight-sets loss to Rafael Nadal in the French Open final on Sunday.

“Defeats like this are never really enjoyable, but in the greatest of defeats you learn the greatest lessons as a tennis player, but as a person as well,” said Djokovic.

He had won 14 of their last 18 meetings and the last three at the Slams, including in the quarter-finals of the 2015 French Open — one of only Nadal’s two losses at the tournament.

But Nadal, who skipped last month’s US Open due to the coronavirus, demolished Djokovic in Paris and finished the one-sided affair with just 14 unforced errors to his opponent’s 52.

“I don’t have much to say but that I was completely overplayed by Rafa, by the better player on the court,” said Djokovic, now 17-10 in major finals.

“Certainly I could have played better, especially in the first two sets. But, you know, just he did surprise me with the way he was playing.

“The quality of tennis he was producing, the level. I mean, he’s phenomenal. He played a perfect match.”

Knee and wrist injuries have taken a toll on Nadal’s career, prompting fears his greatest moments were behind him after he failed to even reach a major semi-final in 2015 and 2016.

‘No holding him back’

But the Spaniard, who arrived at this tournament having played just three matches since February, has put those concerns firmly in the rearview mirror.

“He keeps going. No holding him back it seems like. It’s amazing. I mean, I admire all his achievements, I mean, especially the one here,” gushed Djokovic.

“It’s stunning score and results and records that he’s got on this court. I mean, he lost two times in his entire career.

“Winning 13 times, yeah, there’s not much you can say. All the superlatives you can use, he deserves them.”

Ahead of an event delayed four months by the Covid-19 outbreak, Nadal suggested it would be the most difficult defense of his title, given his lack of preparations and cooler conditions.

Light rainfall before the start of the final led to the closing of the roof on Court Philippe Chatrier, handing what appeared to be an advantage to Djokovic.

“I was also thinking that these conditions are more favorable to me,” said the world number one, whose only previous loss in 2020 was his default at the US Open.

“I was feeling great throughout the tournament playing, playing great tennis, winning in Rome, being very confident about my game.

“But, yeah, I mean, Rafa has proven everybody wrong. That’s why he’s a great champion. He just played a fantastic match today.”