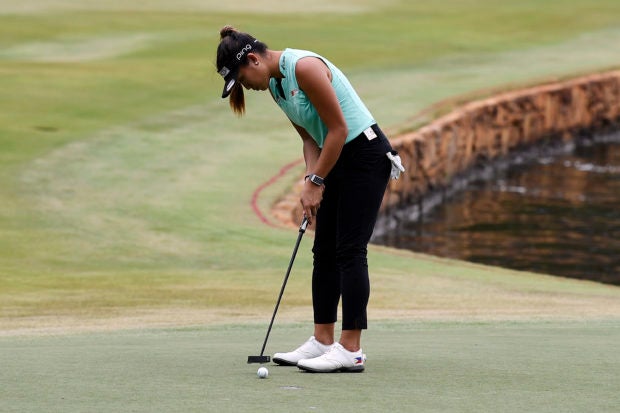 GREENSBORO, GEORGIA – OCTOBER 24: Bianca Pagdanganan putts out her round on the 18th green during round three of the 2020 LPGA Drive On Championship – Reynolds Lake Oconee on October 24, 2020 in Greensboro, Georgia. Mike Comer/Getty Images/AFP

WASHINGTON – Ally McDonald, hoping to win her first LPGA title, fired a three-under par 69 for a one-stroke lead after Saturday’s third round of the Drive On Championship.

The American reeled off four birdies in five holes in the middle of her round to stand on 13-under 203 after 54 holes at Reynolds Lake Oconee in Greensboro, Georgia.

“I played some really solid golf after I settled in,” McDonald said. “I’m excited with the position I’m in. Mentally I think I handled myself really well. Ready to take on tomorrow.”

She hopes for a breakthrough on her 28th birthday Sunday at an event that was created to fill in a gap between US events after the LPGA’s usual Asian swing was wiped out by the coronavirus pandemic.

“I’m sitting on the lead. People are going to be coming for the lead,” McDonald said. “It’s not shying away from it. It’s embracing where I am and try to not be complacent and just go out and execute my game plan.

“I’m definitely in a more comfortable position knowing that what I have in me is enough. I don’t have to push and be more than I am. It’s just trusting what I know I can do.”

No spectators are allowed on the course but boaters on the lakeside layout honked horns for good shotmaking throughout the round.

World number 233 Pagdanganan, the LPGA driving yardage leader who turns 23 next week, hopes for her first LPGA triumph in only her sixth professional start.

“I’ve got to play a little bit more aggressive,” Kang said. “Getting everything together and just firing from the start will be pretty key.”

Kang was to have been seeking a third consecutive LPGA crown in Shanghai this week befire Covid-19 wiped out the event.

McDonald, who began the day with a one-stroke lead on Pagdanganan and Kang, opened with a bogey but bounced back with a birdie at the fifth.

“I never really got panicked after the first hole,” McDonald said. “If anything, might have calmed me just to get that out of the way. But I settled in and got very comfortable. I’m happy with what I did.”

She reeled off three birdies in a row starting at the par-3 eighth, strong iron shots setting up short birdie putts followed by a long effort from off the green at 10, to reach 13-under.

McDonald lipped out from the fringe on a birdie putt at 11 but birdied the par-5 12th to reach 14-under.

Kang’s tee shot at 16 soared right and out of bounds and she needed a 10-foot putt just to rescue double bogey.

“I pushed it,” Kang said. “It was out by a couple inches. I was pretty upset because just a waste of two shots right there minimum. Just not the time to do that.”

When McDonald chipped to three feet and sank a par putt at 16, she reclaimed a four-stroke lead.

McDonald missed the green at the par-3 17th, barely reached the fringe with a pitch on the way to bogey, while Pagdanganan birdied 17 and 18 to seize second alone.

‘We need to catch up on work’: Roque clarifies ‘vacation’ flak