Bottas snatches pole from Hamilton on F1’s return to Imola 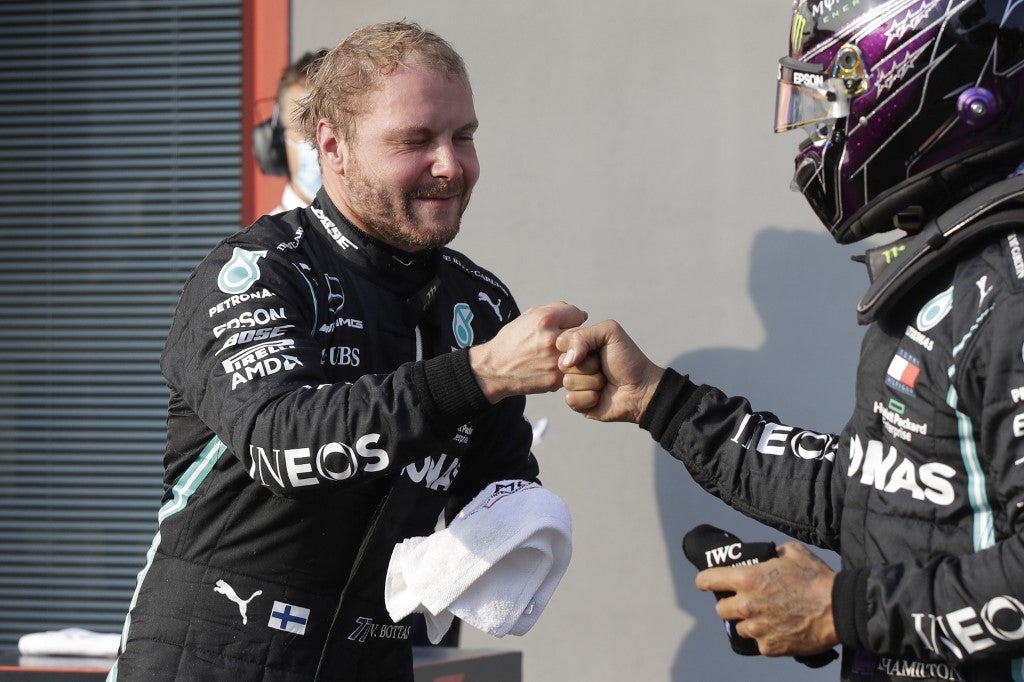 Valtteri Bottas said he had “the shakes” after snatching pole position for Sunday’s Emilia Romagna Grand Prix from his Mercedes teammate Lewis Hamilton with a dramatic late lap in qualifying at Imola on Saturday.

The Finn, who is 77 points adrift of series leader and six-time champion Hamilton with five races remaining in this year’s title, grabbed the prime grid position by a tenth of a second.

Hamilton, who was fastest in the only practice in the morning, had been on top through most of the qualifying session and took provisional pole on his first run in Q3 before Bottas beat him in the final seconds.

Max Verstappen was third for Red Bull ahead of his former teammate Pierre Gasly of Alpha Tauri, Daniel Ricciardo of Renault and Alex Albon in the second Red Bull.

Charles Leclerc took seventh for Ferrari with Daniil Kvyat eighth in the second Alpha Tauri ahead of the two McLarens of Lando Norris and Carlos Sainz.

Bottas’s success brought him his fourth pole of the season and his 15th career pole as the Mercedes team claimed another front-row lockout ahead of the race in which they can claim an unprecedented seventh consecutive constructors’ championship.

They need only one car to finish in the top four to seal that record success.

“It’s never easy to get pole position, but I really enjoyed it around this track,” said Bottas.

“I knew I had to improve on my last lap, so I found those little gains – and I had the shakes after the final run, which is always a good sign!”

“Valtteri did a great job and it was a pretty poor lap from myself, but you can’t always get it right. This track is unbelievable, but I’m pretty certain it will be a boring race tomorrow – just a train after Turn One.”

Verstappen said: “It was tricky, but P3 is not bad really – though I expected to be a bit closer to the Mercedes.”

Having been limited to only 90 minutes’ practice, several teams struggled to deliver a consistent lap, Ricciardo securing his passage to Q2 with seconds remaining.

Among those out in Q2 was Kimi Raikkonen, 41, the only man in the field to have raced before at the circuit. He qualified 18th for his record-increasing 325th race just days after agreeing to stay with Alfa Romeo next year.

As he dropped out, George Russell of Williams, who was also confirmed for 2021 ahead of the race, maintained his impressive ‘Mr Saturday’ form by squeezing into Q2 for the eighth time this year.

At the top, Hamilton’s best lap was deleted for overstepping the track at Turn Nine thus giving Bottas top spot in Q1.

The Finn and the defending champion, along with both Ferraris, headed out on medium tires for Q2 as Red Bull faced trouble – Verstappen’s power unit suffering electrical problems that left his mechanics working against the clock to ensure he could take part.

The Dutchman’s team-mate Alex Albon, under pressure to retain his seat next year, spun at Turn 15, flat-spotting his tires, and also had to repair to the pits.

He was 11th with less than three minutes to go when Verstappen, armed with new spark plugs, re-joined the fray. With no time to spare, on a single run on mediums, he grabbed his passage to the top-ten shootout in sixth while Albon, on softs, took fourth.

Bottas led Hamilton at the top as Sergio Perez and his Racing Point team-mate Lance Stroll were eliminated in 11th and 15th along with Esteban Ocon of Renault, Russell and Vettel.

The ‘black arrows’ stayed on top in the opening Q3 runs, but with Hamilton taking provisional pole in 1:13.781 after dropping a wheel in the gravel, fractionally, at the final corner. Bottas was adrift by 0.031seconds with Verstappen third.

Albon’s lap, good enough for fifth in the opening salvos, was deleted, leaving the luckless Thai driver under pressure again as the second runs began.