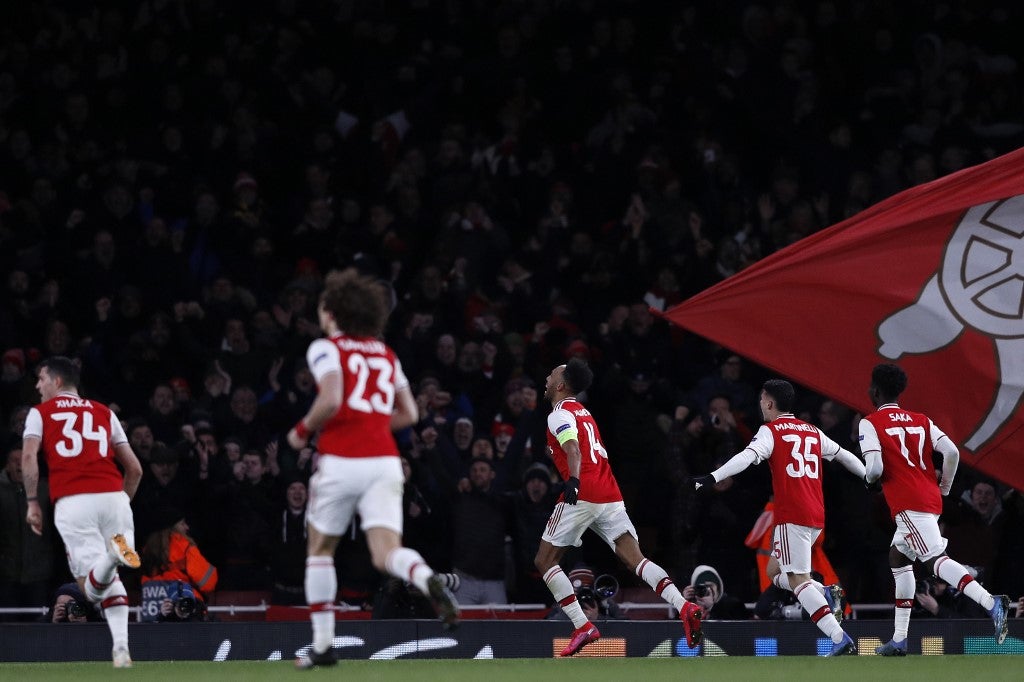 FILE – Arsenal’s Gabonese striker Pierre-Emerick Aubameyang (C) celebrates with teammates after scoring their late goal in extra-time during the UEFA Europa league round of 32 second leg football match between Arsenal and Olympiakos at the Emirates stadium in London on February 27, 2020. (Photo by Adrian DENNIS / AFP)

Pierre-Emerick Aubameyang condemned Manchester United to fresh misery at Old Trafford as his penalty clinched a 1-0 win for Arsenal, while Gareth Bale was the match winner with his first goal since returning to Tottenham in a 2-1 win over Brighton on Sunday.

Aubameyang ended a five-game goal drought in the league when he stepped up to convert a 69th-minute spot-kick after Paul Pogba fouled Hector Bellerin.

The Arsenal captain’s first league goal since the opening weekend of the season gave the Gunners their first league win at Old Trafford since 2006.

United have now failed to win any of their four home league games this season, with the three defeats including a humiliating 6-1 rout against Tottenham.

It is the Red Devils’ worst start to a home league campaign since 1972-73, leaving Ole Gunnar Solskjaer’s team languishing just six points above the relegation zone in 15th place.

After an encouraging end to last season when they secured a top-four finish, United have had an inconsistent start to the new campaign, with the highs of Champions League wins over Paris Saint-Germain and RB Leipzig canceled out by a series of poor league performances.

“We weren’t at the races. We were too sloppy and too many passes went astray,” Solskjaer said.

“Home and away form is out the window with no fans in the stadium. You can’t look at that. It doesn’t really mean too much. But we need to get points on the board.”

Arsenal moved up to ninth, just a point off third, thanks to their first win away at a ‘big six’ rival in 30 attempts.

Mikel Arteta’s men were deserved winners, having dominated for long periods and hit the bar through Willian in the first half.

“I’m delighted because we played with a lot of courage and big personality,” Arteta said.

“Every striker needs goals and in these moments we have to create more for Auba. He has scored the crucial goal and it is going to lift his confidence.”

Bale rescues Spurs
Spurs moved up to second as Bale came off the bench to break Brighton’s resolve in a controversial clash at the Tottenham Hotspur stadium.

Harry Kane’s early penalty put Jose Mourinho’s men in front before the visitors were denied a spot-kick for a pull on Leandro Trossard by Matt Doherty.

Brighton’s bright display got the slice of luck they needed to level 11 minutes into the second-half when referee Graham Scott allowed Tariq Lamptey’s equaliser to stand after what appeared a clear foul on Pierre-Emile Hojbjerg in the build-up, despite reviewing the incident on the pitchside monitor.

Bale got Spurs and Scott off the hook, though, when he powered home a header 17 minutes from time.

“It’s a great feeling,” said Bale. “I just want to come on and make an impact for the team.

“I haven’t played a lot of football. It’s taken time, I’m being patient and working hard when I get chances.”

Everton spurned the chance to go back top of the table on goal difference as they were beaten 2-1 at Newcastle.

Carlo Ancelotti’s side succumbed to a limp defeat as Callum Wilson scored twice in the second half before Dominic Calvert-Lewin’s late reply.

It was a difficult day for Ancelotti, who dropped England number one Jordan Pickford in favor of Robin Olsen after a turbulent start to the season.

Southampton are up to fourth as James Ward-Prowse celebrated his 26th birthday by scoring two fine free-kicks in a 4-3 win against Aston Villa.

Ralph Hasenhuttl’s side lost their first two matches this term, but they have bounced back impressively to win four of their last five games.

Another Ward-Prowse free-kick created the opener, scored by Jannik Vestergaard to open the floodgates.

Ward-Prowse curled a stunning free-kick past Villa keeper Emiliano Martinez from 25 yards in the 33rd minute, then netted another majestic free-kick on the stroke of half-time.

Danny Ings bagged Southampton’s fourth, but later had to be replaced with a worrying looking knee injury.

Tyrone Mings, Ollie Watkins and Jack Grealish pulled goals back for Villa, who slip to seventh.