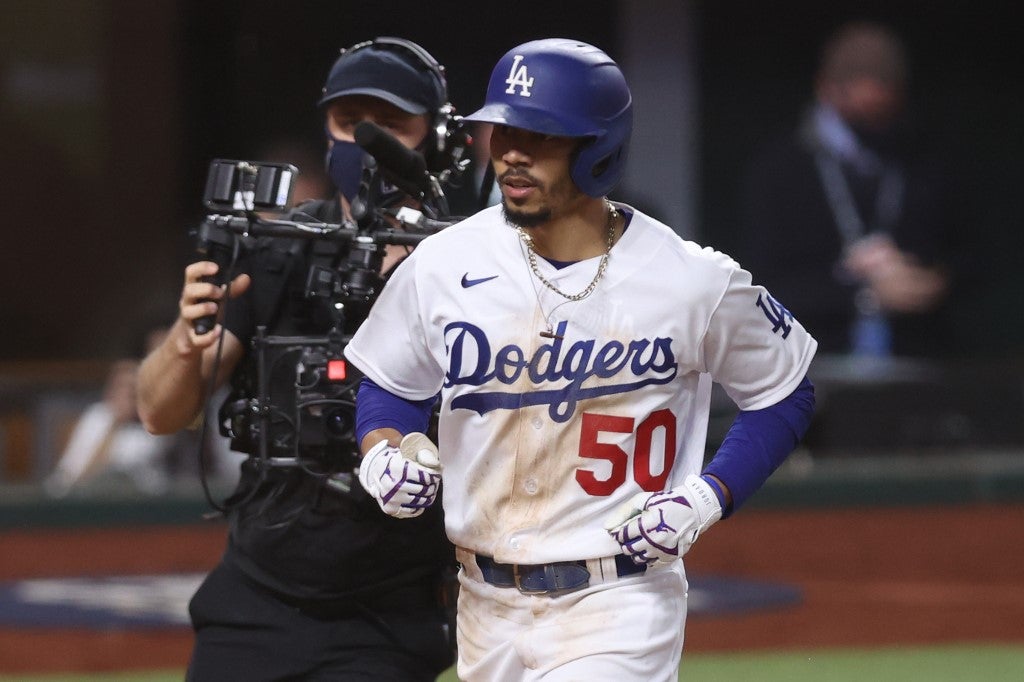 Mookie Betts #50 of the Los Angeles Dodgers comes home to score after hitting a solo home run against the Tampa Bay Rays during the eighth inning in Game Six of the 2020 MLB World Series at Globe Life Field on October 27, 2020 in Arlington, Texas. Tom Pennington/Getty Images/AFP

Los Angeles Dodgers star Mookie Betts could become only the second player in history to win Most Valuable Player in both of Major League Baseball’s top leagues after being named among the finalists for the National League award on Monday.

Betts, who played a pivotal role in helping the Dodgers win their first World Series since 1988 with their 4-2 series victory over the Tampa Bay Rays last week, was named alongside the Atlanta Braves’ Freddie Freeman and the San Diego Padres’ Manny Machado.

The 28-year-old Betts was the American League’s MVP in 2018 when he helped the Boston Red Sox to their World Series crown.

Betts was sensationally traded away by the Red Sox to the Dodgers in February this year, and later signed a $365 million contract that will keep him at the Dodgers through to the end of the 2032 season.

If Betts adds the National League MVP award to his 2018 American League honor, he will become only the second player in baseball history to win MVP in both leagues after Frank Robinson, who won the award in 1961 and 1966 with different teams.

Ryu, who was second in the National League Cy Young voting in 2019, had another solid season with a 2.69 ERA while averaging just under 10 strikeouts per nine innings pitched.

In the National League, Cincinnati Reds’ hurler Trever Bauer, who led the league with a 1.73 ERA, was nominated along with the Chicago Cubs’ Yu Darvish and the New York Mets’ Jacob deGrom.

In the manager of the year awards, Tampa Bay’s Kevin Cash — who guided the Rays to the World Series despite the team having the third-lowest payroll in baseball — is nominated alongside Toronto’s Charlie Montoyo and the Chicago White Sox’s Rick Renteria.